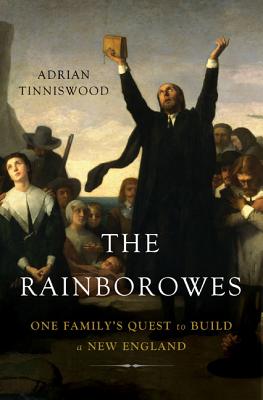 One Family's Quest to Build a New England

The period between 1630 and 1660 was one of the most tumultuous in Western history. These three decades witnessed the birth of English America and, in the mother country, a vicious civil war that rent the very fabric of English social, political, and religious life. It was an era of death and new beginnings, and at its heart was one remarkable family: the Rainborowes.

In The Rainborowes, acclaimed historian Adrian Tinniswood tells the story of this all-but-forgotten clan for the very first time, showing how the family bridged two worlds as they struggled to build a godly community for themselves and their kin. The Rainborowes' patriarch, William, was a shipmaster and merchant whose taste for adventure and profit drew him into the expanding transatlantic traffic between England and its colonies in the New World. Eventually two of his daughters settled in the Massachusetts Bay Colony, marrying into the upper echelons of New England society. Back in England, meanwhile, William Rainborowe's sons threw themselves behind the English parliament in its rebellion against King Charles I. So, too, did many New World settlers, who returned to England to fight for the parliamentary cause. When the monarchy was restored in 1660, many of these revolutionaries quit their homeland for New England, where their dreams of liberty and equality were much closer to being realized.

Following the Rainborowes from hectic London shipyards to remote Aegean islands, from the muddy streets of Boston to the battles of the English Civil War, Tinniswood reveals the indelible marks they left on America and England -- and the profound and irrevocable changes these thirty years had on the family and their fellow Englishmen in Europe and America. A feat of historical reporting, The Rainborowes spans oceans and generations to show how the American identity was forged in the crucible of England's bloody civil war.

Praise For The Rainborowes: One Family's Quest to Build a New England…

Francis J. Bremer, author of Building a New Jerusalem: John Davenport, A Puritan in Three Worlds
“A lively account of an important family in the Atlantic world of the seventeenth century.”

James Horn, author of A Kingdom Strange: The Brief and Tragic History of the Lost Colony of Roanoke
“In this fascinating story of a remarkable family, the Rainborowes and their relatives, Adrian Tinniswood presents a vivid and compelling account of the tumultuous events that swept across the English transatlantic world in the mid-17th century, transforming England and America alike. Through the lens of the Rainborowes' changing fortunes during bloody civil war, mass migration, and social and religious upheaval, the author reminds us of the powerful ties of kinship and faith that spanned the English Atlantic, and of the intense personal struggles that helped shape old and New England in this formative period.”—-

Kirkus
“A marvelously rendered tale of how one extended family helped shape, and was shaped by, the England and New England of the 1600s.... Tinniswood chronicles the Rainborowe family history with both the loving care of a true historian and the wit and candor of a storyteller.... An extraordinary glimpse into a pivotal epoch in Western history.”

Caleb Crain, author of Necessary Errors and American Sympathy
“The Rainborowe clan fought pirates, freed English slaves in North Africa, intermarried with the ruling family of Massachusetts, pioneered transatlantic trade, and led Parliament's army and navy. In his lively and fluent chronicle of the family, Adrian Tinniswood shows how their short tempers, religious conviction, and passion for political equality shaped New England at its founding and remade old England during its Civil Wars.”

Peter C. Mancall, author of Fatal Journey: The Final Expedition of Henry Hudson
“Adrian Tinniswood has followed the irrepressible Rainborowes from church pews to battlefields to the decks of ships battling pirates, and here offers a compelling history of a clan at the center of much of the action that recast the English seventeenth century. This is a captivating family history with the twists and turns of a favorite novel that you don't want to put down.”—-

Mail on Sunday, UK
“Adrian Tinniswood has written a masterful history of Olde and New England during the turbulent years of the Civil War. The Rainborowes is, on one level, a family narrative about a clan of seafarers in the 17th century who travelled between Massachusetts and Wapping. But he also presents a skilled case for the intertwined nature of the Anglo-American psyche.”

American Geneaologist
“Tinniswood provides an enjoyable and readable account of the maritime activities of William Rainborowe and his son Thomas, and their prominent part in the affairs of old and New England in the 1630s and 1640s.”

The Spectator
“Adrian Tinniswood, so gifted and spirited a communicator of serious history to a wide readership, here brings a number of themes from his previous books together.... Tinniswood is ‘not even sure' that he ‘likes' the Rainborowes, ‘with their hard mix of puritanism and politics, their ruthless pursuit of personal profit.' But he could hardly have done more to bring them to life or to capture their part in the convulsions of their time.”

The Telegraph
“[A] fascinating new book.... Tinniswood's main aim here is not, in the end, to prove an abstract argument, but to tell some very good stories – something he does extremely well, with a command of atmospheric detail and a fund of human sympathy.”

The Observer
“In this well researched history of the family and their influence, Tinniswood conjures an England of holy-rolling anti-rational sectarians and Cromwellites of every stripe.... Tinniswood tells the Rainborowe story with snap and brio.... Tinniswood's account is...thorough and elegant, as both the Civil War and the birth of the New World are filtered through the lens of a single, 17th-century family.”—-

The Times (London)
“Neither royal nor noble, [the Rainborowe family] were merchant seamen who changed history, and their stories make exciting tales that throw the political and military turmoil of the 17th century into sharp relief. We meet pirates, religious hardliners and sober thinkers from this radical dissenting family who unfailingly punched well above their weight and by sheer force of will left their mark on the era.... This absorbing book brings us as close as we can get to [Thomas Rainborowe] and to the sturdy, courageous colonists that formed his astounding views.”

Sunday Times
“[An] absorbing narrative.... Tinniswood's exceptional account succeeds in bringing the idealistic, God-fearing and often violent Rainborowes to life, while at the same time exploring the perils involved in trying to build a new state in two very different but intimately connected societies.”

The Guardian
“Adrian Tinniswood has an eye for a good tale. In The Rainborowes he follows the lives of two generations of one family...to retell the story of one of the most remarkable and formative epochs of Anglo-American history.... The transformation of relatively humble Wapping shipwrights, mariners and merchants into colonialists, soldiers, demagogues and sectarians is remarkable and enthralling.”—-

Adrian Tinniswood is senior research fellow in history at the University of Buckingham and the author of Behind the Throne as well as the New York Times bestseller The Long Weekend and The Verneys, which was shortlisted for the Samuel Johnson Prize. Tinniswood has contributed to the London Times, the New York Times, History Today, BBC History Magazine, and the Literary Review, as well as television and radio programs in the US and UK. He was awarded an OBE for services to heritage by her majesty, the Queen, and lives in Bath, England.
Loading...
or
Not Currently Available for Direct Purchase