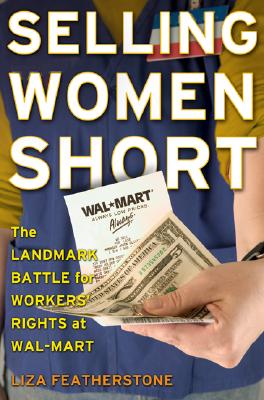 The Landmark Battle for Workers' Rights At Wal-mart

On television, Wal-Mart employees are smiling women delighted with their jobs. But reality is another story. In 2000, Betty Dukes, a 52-year-old black woman in Pittsburg, California, became the lead plaintiff in Dukes v. Wal-Mart Stores, a class action representing 1.4 million women. In an explosive investigation of this historic lawsuit, journalist Liza Featherstone reveals how Wal-Mart, a self-styled "family-oriented," Christian company:· Deprives women (but not men) of the training they need to advance· Relegates women to lower-paying jobs, like selling baby clothes, reserving the more lucrative positions for men· Inflicts punitive demotions on employees who object to discrimination· Exploits Asian women in its sweatshops in Saipan, a U.S. commonwealthFeatherstone reveals the creative solutions Wal-Mart workers around the country have found-like fighting for unions, living-wage ordinances, and childcare options. Selling Women Short combines the personal stories of these employees with superb investigative journalism to show why women who work low-wage jobs are getting a raw deal, and what they are doing about it.

Liza Featherstone is a freelance journalist whose work has been featured in the New York Times, the Los Angeles Times, Newsday, Rolling Stone, and the Washington Post, among other publications. She lives in New York City.
Loading...
or
Not Currently Available for Direct Purchase