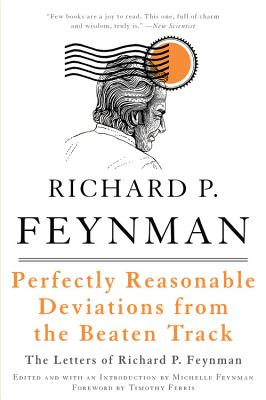 The Letters of Richard P. Feynman

"I'm an explorer, OK? I like to find out!" -- One of the towering figures of twentieth-century science, Richard Feynman possessed a curiosity that was the stuff of legend. Even before he won the Nobel Prize in 1965, his unorthodox and spellbinding lectures on physics secured his reputation amongst students and seekers around the world. It was his outsized love for life, however, that earned him the status of an American cultural icon-here was an extraordinary intellect devoted to the proposition that the thrill of discovery was matched only by the joy of communicating it to others. In this career-spanning collection of letters, many published here for the first time, we are able to see this side of Feynman like never before. Beginning with a short note home in his first days as a graduate student, and ending with a letter to a stranger seeking his advice decades later, Perfectly Reasonable Deviations from the Beaten Track covers a dazzling array of topics and themes, scientific developments and personal histories. With missives to and from scientific luminaries, as well as letters to and from fans, family, students, crackpots, as well as everyday people eager for Feynman's wisdom and counsel, the result is a wonderful de facto guide to life, and eloquent testimony to the human quest for knowledge at all levels. Feynman once mused that "people are entertained' enormously by being allowed to understand a little bit of something they never understood before." As edited and annotated by his daughter, Michelle, these letters not only allow us to better grasp the how and why of Feynman's enduring appeal, but also to see the virtues of an inquiring eye in spectacular fashion. Whether discussing the Manhattan Project or developments in quantum physics, the Challenger investigation or grade-school textbooks, the love of his wife or the best way to approach a problem, his dedication to clarity, grace, humor, and optimism is everywhere evident..

Richard P. Feynman was raised in Far Rockaway, New York, and received his Ph.D. from Princeton. He held professorships at both Cornell and the California Institute of Technology. In 1965 he received the Nobel Prize for his work on quantum electrodynamics. He died in 1988.
Loading...
or support indie stores by buying on