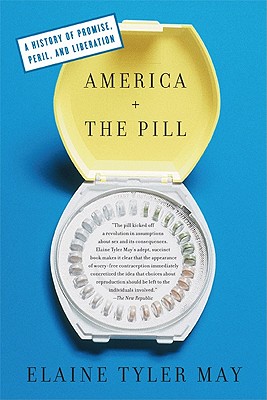 America and the Pill

In 1960, the FDA approved the oral contraceptive that would come to be known as the pill. Within a few years, millions of women were using it. At a time when the population was surging, many believed that the drug would help eradicate poverty around the globe, ensure happy and stable marriages, and liberate women. In America and the Pill, preeminent social historian Elaine Tyler May reveals the ways in which the pill did and did not fulfill these utopian dreams, while also chronicling the stories of the creators, testers, and users who ultimately made the pill their own.

"The Pill kicked off a revolution
in assumptions about sex and its consequences. Elaine Tyler May's adept,
succinct book makes it clear that the appearance of worry-free contraception
immediately concretized the idea that choices about reproduction should be left
to the individuals involved."—New Republic

"May writes that the pill profoundly benefited married women....
It's in such small but seismic shifts, this slender but important book reminds
us, that history is made."—Boston Globe

"May skillfully shows how women fought for access to the
pill, as well as for a safer pill against some pretty big contenders,
pharmaceutical companies and the Catholic Church among them."—Washington Post

"May's material is fascinating.... Although America and the Pill is sometimes celebratory, it is actually most useful in illuminating some of the darker corners of the pill's history, a history that women's health activists ought to know."—American Prospect

"[A] noteworthy
uncontentious précis of the pill's half-century in American life....
Understanding that the book is fundamentally, nonargumentatively pro-pill, one
couldn't ask for a better short history of its subject."—Booklist

"With characteristic clarity and wit, May has produced a
compelling history of oral contraception that incorporates medicine, morals,
and popular media. In concise and carefully crafted chapters she honors the
feminists who enabled the initial research, explores the utopian hopes that the
pill would solve world problems, and exposes the myths about its revolutionary
impact. A wonderful read for students and a timely source for professionals and
the public concerned about sexuality, reproduction, and social policy."—Estelle B Freedman, Edgar E. Robinson Professor in U.S. History at Stanford University, and author of NoTurning Back: The History of Feminism and the Future of Women

"America and the Pill concisely explains the development, evolution, and influence of this revolutionary technology on American culture from the 1950s through the present.... May has written an accessible, engaging text that commemorates an important contraceptive revolution."—Journal of American History

"[I]n America and the Pill, historian Elaine Tyler May tidily debunks perceptions of oral contraception as feminism's magic bullet.... America and the Pill is a lean, captivating history.... May is a skilled writer, and she weaves the book's abundant personal accounts of women's experiences with the Pill with discussion of governmental policies and historical records to create clear and legible scholarship. By the end of America and the Pill, I hadn't just learned about the Pill--I had a better sense of our nation's cultural history."—Bitch

"Brilliantly written and cogently argued, Elaine Tyler May's America and the Pill beautifully portrays the intersection of the sexual revolution, the rise of feminism, and the emergence of the birth control pill. With a keen sense of how culture and politics interact, she explores all the ramifications of this extraordinary change, especially through the words of the women most directly affected. This is a tour de force."—William H. Chafe, Alice Mary Baldwin Professor of History at Duke University and former president of the Organization of American Historians

"Elaine Tyler May is one of those rare historians who can take a set of complicated issues and make them both fascinating and comprehensible. This book belongs on the bookshelf of anyone who wants to understand how the Pill changed the lives of women--and men."—Margaret Marsh, Dean, Faculty of Arts and Sciences and University Professor of History, Rutgers University

Elaine Tyler May is the Regents Professor of American Studies and History at the University of Minnesota. The award-winning author of five books and the former president of the American Studies Association, May lives in Minneapolis, Minnesota.
Loading...
or
Not Currently Available for Direct Purchase