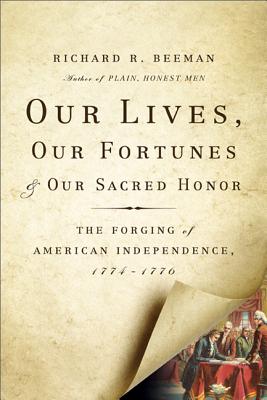 Our Lives, Our Fortunes and Our Sacred Honor

In 1768, Philadelphia physician Benjamin Rush stood before the empty throne of King George III, overcome with emotion as he gazed at the symbol of America's connection with England. Eight years later, he became one of the fifty-six men to sign the Declaration of Independence, severing America forever from its mother country. Rush was not alone in his radical decision -- many of those casting their votes in favor of independence did so with a combination of fear, reluctance, and even sadness.

In Our Lives, Our Fortunes and Our Sacred Honor, acclaimed historian Richard R. Beeman examines the grueling twenty-two-month period between the meeting of the Continental Congress on September 5, 1774 and the audacious decision for independence in July of 1776. As late as 1774, American independence was hardly inevitable -- indeed, most Americans found it neither desirable nor likely. When delegates from the thirteen colonies gathered in September, they were, in the words of John Adams, "a gathering of strangers." Yet over the next two years, military, political, and diplomatic events catalyzed a change of unprecedented magnitude: the colonists' rejection of their British identities in favor of American ones. In arresting detail, Beeman brings to life a cast of characters, including the relentless and passionate John Adams, Adams' much-misunderstood foil John Dickinson, the fiery political activist Samuel Adams, and the relative political neophyte Thomas Jefferson, and with profound insight reveals their path from subjects of England to citizens of a new nation.

A vibrant narrative, Our Lives, Our Fortunes and Our Sacred Honor tells the remarkable story of how the delegates to the Continental Congress, through courage and compromise, came to dedicate themselves to the forging of American independence.

Praise For Our Lives, Our Fortunes and Our Sacred Honor: The Forging of American Independence, 1774-1776…

“Beeman's prose captures those tensions and facilitates the imagination so the reader can feel a part of the debate.... Our Lives, Our Fortunes and Our Sacred Honor is an appropriate complement to David Stewart's The Summer of 1787.... Beeman has produced an authoritative account of how this nation was imagined, and how the members from different sections of the continent were able to put aside their differences and to explore their differing philosophical, political and market needs to form an embryonic government that has grown to be a beacon for other communities seeking self-governance.”
—Roanoke Times

“An engaging history of the Founders of 1776.”
—Booklist

“Lively study of the main players of the two Continental Congresses.... Beeman elegantly moves through the deeply compelling process of how these motley characters fashioned government as an agency for the people. A welcome addition to a rich, indispensable field of scholarly study.”
—Kirkus Reviews, Starred Review—-

“The American Revolution tends to bring out the best in its chroniclers. Case in point: Richard Beeman's latest book, Our Lives, Our Fortunes, & Our Sacred Honor: The Forging of American Independence, 1774-1776. It's a charming, fast-paced retelling of a narrative that's been retold a thousand times before.... It's not really the historian's trade he's plying in these pages but rather the epic poet's: reciting the grand old stories while the wine of patriot season flows and the night sky over Boston is filled with fireworks.
There's a worth to that, and Beeman has written a worthy book.”
—Open Letters Monthly

“This book should be required reading in every college survey course on American History... An outstanding book that should become an instant classic and needs to be on the bookshelf of anyone who fancies themselves knowledgeable about the Revolutionary Period.”
—Battles & Book Reviews

“Richard Beeman's account of the movement to American independence is gripping, even if the reader knows the subject well and has no doubt as to how it ends.... We are fortunate to have as readable and cogent account of it as Our Lives, Our Fortunes and Our Sacred Honor.”
—Federal Lawyer

“Our best history of the Continental Congress and the grand debate that led to independence.... With back-room deals and personality clashes in abundance, Beeman's tale of independence is as complex, worldly, and occasionally tedious as modern-day politics.”
—Books & Culture

“You walk away from Our Lives with the undeniable impression that the Founding Fathers really were giants, however flawed, who single-handedly created American democracy.”
—Slate—-

Richard R. Beeman is the John Welsh Centennial Professor of History at the University of Pennsylvania. He is the author of several books on the American Revolution and Constitution, including the Penguin Guide to the United States Constitution. He is a trustee of the National Constitution Center. Beeman lives in Media, Pennsylvania.
Loading...
or
Not Currently Available for Direct Purchase