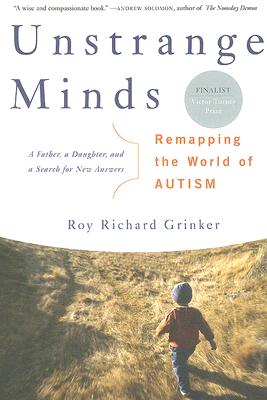 Remapping the World of Autism

A father's inspiring portrait of his daughter informs this classic reassessment of the "epidemic" of autism.
When Isabel Grinker was diagnosed with autism in 1994, it occurred in only about 3 of every 10,000 children. Within ten years, rates had skyrocketed. Some scientists reported rates as high as 1 in 150. The media had declared autism an epidemic.
Unstrange Minds documents the global quest of Isabel's father, renowned anthropologist Roy Richard Grinker, to discover the surprising truth about why autism is so much more common today. In fact, there is no autism epidemic. Rather, we are experiencing an increase in autism diagnoses, and Grinker shows that the identification and treatment of autism depends on culture just as much as it does on science.
Filled with moving stories and informed by the latest science, Unstrange Minds is a powerful testament to a father's search for the truth.

Roy Richard Grinker is Professor of Anthropology and Director, George Washington University Institute for Ethnographic Research. He is the author of four other books, including the widely acclaimed In the Arms of Africa: The Life of Colin M. Turnbull. He lectures widely at universities and to parents and professionals involved in autism. He lives in Cabin John, Maryland.

Praise For Unstrange Minds: Remapping the World of Autism…

"Hands down, Unstrange Minds is the most useful book of the bunch for anyone who is interested in learning more about autism."
—USA Today


"In his rigorous and compelling book, Grinker examines the way advances in child psychiatry and cultural attitudes have changed the picture of autistics and limns his family's own hopeful story. He travels widely to report on autism in countries including South Africa, where some patients see Zulu healers. Deeper and more provocative than other such memoirs, his work beautifully conveys the fact that Isabel is not her disability: instead she is invested with 'an inner truth, struggling to blossom.'"
—Michelle Green, People


"Unstrange Minds makes the case that the rise in autism diagnosis is nothing more than an epidemic of discovery."
—Slate

"This is a wise and compassionate book, informed by academic rigor, deep personal feeling, and a sensitivity not only to the difference that is autism but also to the variety of human experience across cultures and classes. Grinker's research is as wide-ranging as it is open-minded, bringing together the precision of social science and the artistry of memoir, balancing the academic and the anecdotal to build polemical arguments about the nature and prevalence of autism. He speaks of how people have responded to the illness, and of how else we might respond, and in doing so challenges us to make a better world."
—Andrew Solomon, author of The Noonday Demon


"Roy Richard Grinker, a renowned anthropologist, walks across the rolling, highly charged world of autism and somehow manages to decipher what is real and what is not. The result is this big-hearted, uplifting, fiercely rigorous book - a genuine gift to readers who believe in the power of truth."
—Ron Suskind, Pulitzer Prize-winning journalist and author of A Hope in the Unseen


"Unstrange Minds is not only a compassionate account of the fights parents all over the world wage for their children with autism. It is also a beautifully written history....Unstrange Minds is as compelling as it is heartbreaking and wise."
—Marti Lembach, author of Daniel Isn't Talking


"A fresh view of the challenges posed by this condition...Grinker's exploration of cultural differences in attitudes to autism is very moving."
—Nature

"His daughter Isabel was diagnosed in 1994, and his warmth and compassion for autistic children and parents alike shines through this immensely readable and informative narrative that looks closely at how culture influences the ways we understand, classify and treat autistic-spectrum disorders."
—Toronto Globe & Mail
or support indie stores by buying on
(This book is on backorder)
Copyright © 2020 American Booksellers Association