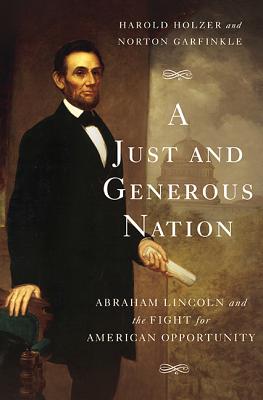 A Just and Generous Nation (Hardcover)

Abraham Lincoln and the Fight for American Opportunity

In A Just and Generous Nation, the eminent historian Harold Holzer and the noted economist Norton Garfinkle present a groundbreaking new account of the beliefs that inspired our sixteenth president to go to war when the Southern states seceded from the Union. Rather than a commitment to eradicating slavery or a defense of the Union, they argue, Lincoln's guiding principle was the defense of equal economic opportunity.

Lincoln firmly believed that the government's primary role was to ensure that all Americans had the opportunity to better their station in life. As president, he worked tirelessly to enshrine this ideal within the federal government. He funded railroads and canals, supported education, and, most importantly, issued the Emancipation Proclamation, which opened the door for former slaves to join white Americans in striving for self-improvement. In our own age of unprecedented inequality, A Just and Generous Nation reestablishes Lincoln's legacy as the protector not just of personal freedom but of the American dream itself.

Harold Holzer is one of the country's foremost authorities on Lincoln. The author of several books, including Lincoln and the Power of the Press, Holzer lives in Rye, New York.

Norton Garfinkle is an economist and chair of the Future of American Democracy Foundation. He lives in New York City.

Praise For A Just and Generous Nation: Abraham Lincoln and the Fight for American Opportunity…

Civil War Book Review
“But that is not to say that there is not room for more edifying books about the nation's 16th President. This is just such a book. Nothing compares to it since Gabor Boritt's Lincoln and the Economics of the American Dream, which presented Lincoln's detailed economic concerns long before he became president and what America should become… a provocative book.”

Publishers Weekly starred review
“Lincoln scholar Holzer and economist Garfinkle justify adding another Lincoln biography to the overflowing genre by conceiving, and supporting, a radical explanation for the great question about Lincoln's life: Why exactly was the Civil War fought?... The thesis is sure to be controversial, but Holzer and Garfinkle make their point well.”

Kirkus Reviews
“A compelling study.... A well-honed work of driving focus, particularly timely in this new era of economic inequality.”

New York Times Book Review
“Holzer and Garfinkle have written a stimulating book. They describe convincingly Lincoln's core conviction that government must foster equal opportunity in order to build and sustain a strong middle class. With clarity and passion, they show Lincoln the pragmatist working toward that end.”

Library Journal, starred review
“This review of Lincoln's thoughts and actions and examination of subsequent administrations' willingness to promote and secure the American Dream will generate much-needed debate on the history, efficacy, and morality of government's role and responsibility in shaping an economy of fairness and growth. The future of America depends on that question.”

Daily Beast
“A Just and Generous Nation has appeared just in time. Just in time for the 2016 presidential campaigns—and for the Democrats to learn a thing or two about American history… I heartily recommend that Hillary, Martin, and Bernie read Holzer and Garfinkle's new book on Lincoln and his legacy… if Hillary, Martin, and Bernie want to redeem American democracy and save American middle-class society from the throes of plutocracy and the evils of class war from above, they would do very well to read A Just and Generous Nation.”

Katrina vanden Heuvel, Editor & Publisher, The Nation
“In their magisterial book, A Just and Generous Nation, Harold Holzer and Norton Garfinkle give contemporary America an Abraham Lincoln for our times. Theirs is a president who understood that the great conflict of the ages is the strife between privilege and equality, and that equal economic opportunity for all Americans is the heart of our country's more perfect union.”

Sean Wilentz, author of The Rise of American Democracy: Jefferson to Lincoln
“Harold Holzer and Norton Garfinkle's concise study brilliantly shows all the ways the modern Republican Party has trashed the legacy of Abraham Lincoln—not only on racial justice but on the economics of the American dream. Here is exacting and responsible history put to good purpose, dispelling the amnesia and the myths that plague our public life.”

Alan S. Blinder, author of After the Music Stopped: The Financial Crisis, the Response, and the Work Ahead
“You may think nothing could change your view of Lincoln. Think again. This cogently argued and elegantly written book may do exactly that. Its tracing of a coherent line of economic thought straight through from young Abe to Barack Obama makes an engaging read.”
or
Buy Here
Copyright © 2020 American Booksellers Association