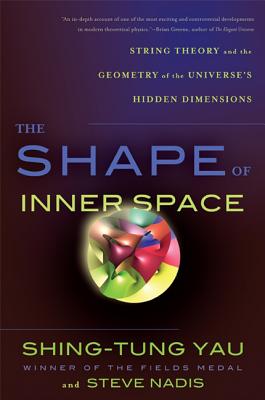 The Shape of Inner Space (Paperback)

String Theory and the Geometry of the Universe's Hidden Dimensions

String theory says we live in a ten-dimensional universe, but that only four are accessible to our everyday senses. According to theorists, the missing six are curled up in bizarre structures known as Calabi-Yau manifolds. In The Shape of Inner Space, Shing-Tung Yau, the man who mathematically proved that these manifolds exist, argues that not only is geometry fundamental to string theory, it is also fundamental to the very nature of our universe.

Time and again, where Yau has gone, physics has followed. Now for the first time, readers will follow Yau’s penetrating thinking on where we’ve been, and where mathematics will take us next. A fascinating exploration of a world we are only just beginning to grasp, The Shape of Inner Space will change the way we consider the universe on both its grandest and smallest scales.

Shing-Tung Yau has won many awards, including the Fields Medal. He is a professor of mathematics at Harvard University and lives in Cambridge, Massachusetts.

Steve Nadis is a Contributing Editor to Astronomy Magazine. He has published articles in Nature, Science, Scientific American, New Scientist, Sky&Telescope, The Atlantic Monthly, and other journals. He has written or contributed to more than two dozen books. A former staff researcher for the Union of Concerned Scientists, Nadis has also been a research fellow at MIT and a consultant to the World Resources Institute, the Woods Hole Oceanographic Institution, and WGBH/NOVA. He lives in Cambridge, Massachusetts.

Praise For The Shape of Inner Space: String Theory and the Geometry of the Universe's Hidden Dimensions…

, Vols. 1 & 2
“Einstein’s vision of physical laws emerging from the shape of space has been expanded by the higher dimensions of string theory. This vision has transformed not only modern physics, but also modern mathematics. Shing-Tung Yau has been at the center of these developments. In this ambitious book, written
Newsletter of the European Mathematical Society

Of course, none of this could have been foretold more than a half century ago when a man named Eugenio Calabi — the first half of the Calabi-Yau duo — proposed that there could be multidimensional spaces with properties so special that many mathematicians, including one of this book's authors, considered them "too good to be true." Calabi had not been thinking about physics at the time, in the early 1950s, when he advanced the famous conjecture named after him. Following the proof of the Calabi conjecture, we have learned many new and wonderful things in both physics and mathematics — all of which suggest that Calabi-Yau spaces are not only too good to be true, as the skeptics used to say, but that they may be even better.

BLURBS
Brian Greene, Professor of Mathematics & Physics, Columbia University; author of The Fabric of the Cosmos and The Elegant Universe
“The Shape of Inner Space provides a vibrant tour through the strange and wondrous possibility that the three spatial dimensions we see may not be the only ones that exist. Told by one of the masters of the subject, the book gives an in-depth account of one of the most exciting and controversial developments in modern theoretical physics.”

American Journal of Physics
“The Shape of Inner Space is a portrait of a beautiful branch of geometric analysis as seen through the eyes of one of its pioneers, Fields medal winner Shing-Tung Yau… After describing the sequence of events that led him to the United States and to his enamoration with geometry, Yau explains as only a master could the conjecture by Calabi and the subsequent discovery of Calabi-Yau manifolds that are the centerpiece of this book. The reader is thrown into a world of complex manifolds, geometric analysis, and differential equations, yet the book is written so that the persistent layperson could follow all of the main ideas.”

Notes of the Canadian Mathematical Society
“In the fascinating book, The Shape of Inner Space… Shing-Tung Yau, along with coauthor Steve Nadis, describes the exciting development of the theory of what are now called Calabi-Yau manifolds and their relationship to the structure of the universe.”

Philippine Daily Inquirer
“A journey into the mind of a brilliant mathematician, The Shape of Inner Space will delight readers who are not afraid to use their minds.”

College Mathematics Journal
“A worthy successor to The Elegant Universe.”

AUTHORS' STATEMENT by SHING-TUNG YAU and STEVE NADIS
There is a certain irony running through this book that one of the smallest things you can possibly imagine — six-dimensional geometric spaces that may be more than a trillion times smaller than an electron — could, nevertheless, be one of the defining features of our universe, exerting a profound influence that extends to every single point in the cosmos. This book is, in many ways, the story of those spaces, which physicists have dubbed "Calabi-Yau manifolds." It tells how one of us, Yau, managed to prove the existence, mathematically, of those spaces, despite the fact that he had originally set out to prove that such spaces could not possibly exist. It then goes on to explain how this mathematical proof, which had initially been ignored by physicists (partly because it was steeped in difficult, nonlinear arguments), nevertheless made its way into the center of string theory, which now stands as the leading theory of the universe and our best hope yet of unifying all the particles and forces observed — and yet to be observed--in nature.
or support indie stores by buying on
Copyright © 2020 American Booksellers Association