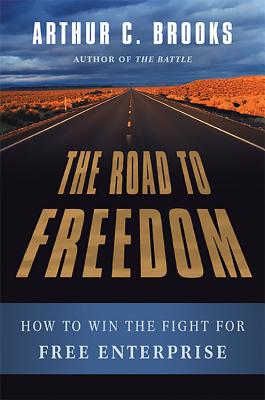 The Road to Freedom

How to Win the Fight for Free Enterprise

Entrepreneurship, personal responsibility, and upward mobility: These traditions are at the heart of the free enterprise system, and have long been central to America's exceptional culture. In recent years, however, policymakers have dramatically weakened these traditions -- by exploding the size of government, propping up their corporate cronies, and trying to reorient our system from rewarding merit to redistributing wealth.

In The Road to Freedom, American Enterprise Institute President Arthur C. Brooks shows that this trend cannot be reversed through materialistic appeals about the economic efficiency of capitalism. Rather, free enterprise requires a moral defense rooted in the ideals of earned success, equality of opportunity, charity, and basic fairness. Brooks builds this defense and demonstrates how it is central to understanding the major policy issues facing America today.

The future of the free enterprise system has become a central issue in our national debate, and Brooks offers a practical manual for defending it over the coming years. Both a moral manifesto and a prescription for concrete policy changes, The Road to Freedom will help Americans in all walks of life translate the philosophy of free enterprise into action, to restore both our nation's greatness and our own well-being in the process.

Praise For The Road to Freedom: How to Win the Fight for Free Enterprise…

John Mackey, Co-Founder and CEO, Whole Foods Markets
“Arthur Brooks has written an important and timely book that shows how America became a prosperous and great nation through the free enterprise system of individual opportunity and entrepreneurship. He intelligently discusses the fundamental principles of ethics, fairness, helping the poor, providing a safety net, and the proper role of government in a free enterprise economy. In addition, he proposes policy reforms, which if our nation embraced them, would relatively quickly solve many of our nation's most serious challenges. I heartily recommend this book as an excellent road map to create a prosperous, socially just, and ethical society.”

Congressman Paul Ryan
“Arthur Brooks knows, as America's Founders knew, that free enterprise underpins the moral case for human freedom. Economic freedom produces unimaginable material prosperity, but it's also the only economic form that encourages individuals to freely pursue their destinies, develop the character of self-responsibility, and strengthen communities. Brooks eloquently confronts the growing threat to economic freedom and human fulfillment and describes the fundamental choices Americans must make to get back on the right road.”

George F. Will
“It is true, but insufficient, to argue that free enterprise makes us better off. Arthur Brooks makes the indispensable point that it also makes us better. Having stumbled far down the road to serfdom, we are much in need of Brooks' trenchant case for a change of course.”

P. J. O'Rourke
“America's tradition of being free provides greater economic growth and efficiency, better distribution of opportunities, and larger possibilities for the pursuit of happiness.  But what's really important about being free is that it's moral. Individual liberty and personal responsibility are right.  Collective restraint and communal irresponsibility are wrong. The Road to Freedom is a road from wrong to right.”

Arthur C. Brooks is President of the American Enterprise Institute, a public policy think tank in Washington, DC. He is the author of nine books, including The Battle, Gross National Happiness, and Who Really Cares. Until 2009, Brooks was the Louis A. Bantle Professor of Business and Government Policy at Syracuse University.

Previously, Brooks spent twelve years as a professional French hornist with the City Orchestra of Barcelona and other ensembles. He is a native of Seattle and currently lives in Bethesda, Maryland, with his wife Ester and their three children.