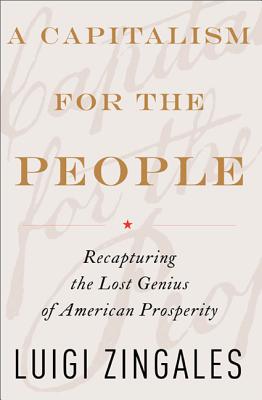 A Capitalism for the People

Born in Italy, University of Chicago economist Luigi Zingales witnessed firsthand the consequences of high inflation and unemployment--paired with rampant nepotism and cronyism--on a country's economy. This experience profoundly shaped his professional interests, and in 1988 he arrived in the United States, armed with a political passion and the belief that economists should not merely interpret the world, but should change it for the better.
In "A Capitalism for the People," Zingales makes a forceful, philosophical, and at times personal argument that the roots of American capitalism are dying, and that the result is a drift toward the more corrupt systems found throughout Europe and much of the rest of the world. American capitalism, according to Zingales, grew in a unique incubator that provided it with a distinct flavor of competitiveness, a meritocratic nature that fostered trust in markets and a faith in mobility. Lately, however, that trust has been eroded by a betrayal of our pro-business elites, whose lobbying has come to dictate the market rather than be subject to it, and this betrayal has taken place with the complicity of our intellectual class.

Because of this trend, much of the country is questioning--often with great anger--whether the system that has for so long buoyed their hopes has now betrayed them once and for all. What we are left with is either anti-market pitchfork populism or pro-business technocratic insularity. Neither of these options presents a way to preserve what the author calls "the lighthouse" of American capitalism. Zingales argues that the way forward is pro-market populism, a fostering of truly free and open competition for the good of the people--not for the good of big business.

Drawing on the historical record of American populism at the turn of the twentieth century, Zingales illustrates how our current circumstances aren't all that different. People in the middle and at the bottom are getting squeezed, while people at the top are only growing richer. The solutions now, as then, are reforms to economic policy that level the playing field. Reforms that may be anti-business (specifically anti-big business), but are squarely pro-market. The question is whether we can once again muster the courage to confront the powers that be.


Praise For A Capitalism for the People: Recapturing the Lost Genius of American Prosperity…

National Review Online
“[A Capitalism for the People] is the book that hits closest to the mark on the question of where the American center-right ought to go in the next few years.” Sacramento Bee
“Zingales offers more than rehashed Friedman or Hayek. It’s a book that should appeal to tea partyers and the Occupy Wall Street crowd.”
Publishers Weekly
“Zingales…presents a striking dichotomy….engaging.” Financial Times
“Zingales’s fundamental diagnosis is right….[T]his remains a stimulating essay on the nature of American capitalism and the issues that will determine the pace of America’s relative decline.” Marginal Revolution, Tyler Cowen“I know you have book fatigue, popular economics book fatigue, policy book fatigue, and books-with-subtitles-like-this fatigue, all at once.  But this book is really, really good.  It hits all the right notes, is clearly written, and refers to academics as the new crony capitalists.  I agreed with almost all of it.  If I had to pick out one book, of this entire lot of books, to explain what is going on right now to a popular audience of non-economists, this might well be it.” J. Bradford DeLong, University of California, Berkeley
“More than 30 years ago, Milton and Rose Director Friedman raised high the banner of small-government free-market libertarianism with their Free to Choose. Now, a generation later, income inequality is substantially higher, the globe is even more interconnected, and our partial financial deregulation has backfired badly. Luigi Zingales thus has a harder task as he tries to update the small-government free-market libertarian position for the 21st century. But he has done a very good job at it.”
Robert J. Shiller, author of Finance and the Good Society
“This remarkably creative book, driven by a strong moral conviction, offers a bold array of ideas for us to ponder, so we can really make the American capitalist model work better for everyone.”
Edmund S. Phelps, Director, Center on Capitalism and Society, Columbia University
“In A Capitalism for the People, Luigi Zingales joins the small but influential group of economists who see that America’s economy is now more and more corporatist, less and less capitalist. His impressive account of our downhill slide is enriched by his deep knowledge of the harm wrought by the worst excesses of Italian crony capitalism. A must-read.”
Nell Minow, co-author of Corporate Governance and co-owner and board member of GMI Ratings
“An especially accessible and holistic assessment of what went wrong in our financial markets and an especially thoughtful and constructive proposal for the future.  Highly recommended!”
Paul Ryan, U.S. Congressman, Wisconsin
“In A Capitalism for the People, Luigi Zingales exposes the pernicious collusion of big business and big government – offering the sharp analytical perspective of a world-renowned economist and the unique personal perspective of an immigrant living the American Dream.  This must-read for policymakers and citizens alike serves as a lucid call to action for rediscovering what makes America exceptional.”
N. Gregory Mankiw, Robert M. Beren Professor of Economics, Harvard University, and author of Principles of Economics
“A Capitalism for the People is a wise, deep, and timely book.  With lively prose, Zingales diagnoses what is right and wrong with the U.S. economy.  Whether your political sympathies lie with the Tea Party, Occupy Wall Street, or someplace in between, you will learn much about how we can best promote an economic future that works for all of us.”

The Economist
“[A]n elegy to the America (Zingles) found when he moved here 24 years ago.”

John R. Talbott, Huffington Post“[O]utstanding….I give the book my ultimate compliment; it is so full of new and innovative ideas that it makes you pause and think on every page.” National Review“[W]e are fortunate to have an Italian-born economist so powerfully and persuasively defending America’s once exceptional free-enterprise system.” Co.Exist, a blog of Fast Company “Zingales is readable, engaging, and full of insight. A Capitalism For The People is worth the time of anyone, left or right, who cares about the future of the American market system.” Adam Ozimek, Modeled Behavior, a blog on Forbes.com
“[A Capitalism for the People is] unquestionably insightful and thought-provoking, and it has plenty of smart policy recommendations….I do strongly recommend A Capitalism for the People to anyone looking for a robust and pragmatic vision of free market economics directed at current problems.”

LA Progressive“Zingales is excellent.” Iain Martin, The Telegraph“[A] brilliant and important new book.” Mechanics Institute Library
“[Zingales] provides a forceful look at how pro-business forces overwhelmed the pro-market principles that made American capitalism great, and how we can get it back on track. This book should have a wide readership, from the Occupy Wall Street crowd to Tea Partyers.”

Luigi Zingales is the Robert C. McCormack Professor of Entrepreneurship and Finance at the University of Chicago's Booth School of Business. He is a faculty research fellow for the National Bureau of Economic Research, a research fellow for the Center for Economic Policy Research and a fellow for the European Governance Institute. He is the Lead Independent Director of Telecom Italia and the Vice President of the American Finance Association. He is the co-author of Saving Capitalism from the Capitalists and a contributing editor of City Journal. He lives in Chicago with his wife and children.
Loading...
or
Not Currently Available for Direct Purchase