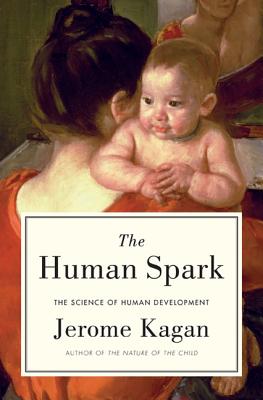 The Science of Human Development

As infants we are rife with potential. For a short time, we have before us a seemingly infinite number of developmental paths. Soon, however, we become limited to certain paths as we grow into unique products of our genetics and experience. But what factors account for the variation -- in skills, personalities, values -- that results? How do experiences shape what we bring into the world?

In The Human Spark, pioneering psychologist Jerome Kagan offers an unflinching examination of personal, moral, and cultural development that solidifies his place as one of the most influential psychologists of the past century. In this definitive analysis of the factors that shape the human mind, Kagan explores the tension between biology and the environment. He reviews major advances in the science of development over the past three decades and offers pointed critiques and new syntheses. In so doing, Kagan calls out the shortcomings of the modern fad for neuroscience, shows why theories of so-called attachment parenting are based on a misinterpretation of research, and questions the field's reflexive tendency to pathologize the behavior of the young. Most importantly, he reminds us that a life, however influenced by biology and upbringing, is still a tapestry to be woven, not an outcome to be endured.

A profound exploration of what is universal and what is individual in human development, The Human Spark is the result of a scientist's lifelong quest to discover how we become who we are. Whether the reader is a first-time parent wondering what influence she, her genes, and the wider world will have on her child; an educator seeking insight into the development of her students; or simply a curious soul seeking self-knowledge, Kagan makes an expert and companionable guide.

Jerome Kagan is emeritus professor of psychology at Harvard University and one of the pioneers of the field of developmental psychology. The author of numerous books including The Nature of the Child and Galen's Prophecy, he received the William James Award from American Psychological Association. In 2009 he was featured in a New York Times Magazine cover story about anxiety.

Praise For The Human Spark: The Science of Human Development…

“[T]hought-provoking.... Authoritative and surprising, Kagan guides us through the most current research in the field, tracing its shifting intellectual fashions from emphasizing ‘nurture' to the current reliance on neuroscience and showing how these fashions play out culturally. This wise and affirming book is essential reading for anyone interested in what makes us human.”—Shelf Awareness for Readers, starred review

“A vividly titled overview, by the pioneering developmental psychologist, of his current thinking about the answer to the question, ‘What does it mean to be human?' Reading him, one resonates to the kind of teacher he must have been.”—Harvard Magazine

“An intriguing overview of many of the underlying assumptions guiding modern psychology.”—Kirkus Reviews

“An insightful discussion of the epistemology of psychology…. [Kagan] offers illuminating discussions of the impact of culture on childhood development…. [A] fascinating summary of the current science behind human development from one of the leaders in the field.”—Publishers Weekly

“In his masterful survey, Kagan filters findings in the field.... An authoritative study of the dance of genes and environment in each child as they grow in universally human, and profoundly individual, ways.”—Nature

“Best known for his work exploring the persistence of inborn temperamental differences, Kagan here expands his inquiry into other areas, including the problems inherent in trying to understand something as complex as human nature by looking through as narrow a lens as neuroscience, genetics, or psychological research. The result is a wide-ranging book that...often offers astonishing details amid the research Kagan summarizes.”—Boston Globe

“Kagan makes a strong case that personality is more elastic, and resilient, than we may think: Even toddlers who experience extreme abuse or deprivation can become well-adjusted adults.”—Discover

“Kagan grapples manfully with the complexity of what it means to be human, and has a magnificent disregard for orthodoxy—questioning everything from attachment theory to the belief that animal emotions are comparable to our own.”—New Scientist
or
Not Currently Available for Direct Purchase
Copyright © 2020 American Booksellers Association