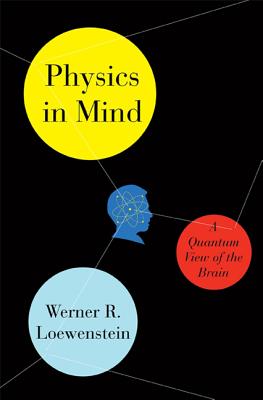 A Quantum View of the Brain

No one can escape a sense of awe when reflecting on the workings of the mind: we see, we hear, we feel, we are aware of the world around us. But what is the mind? What do we mean when we say we are “aware” of something? What is this peculiar state in our heads, at once utterly familiar and bewilderingly mysterious, that we call awareness or consciousness?

In Physics in Mind, eminent biophysicist Werner R. Loewenstein argues that to answer these questions, we must first understand the physical mechanisms that underlie the workings of the mind. And so begins an exhilarating journey along the sensory data stream of the brain, which shows how our most complex organ processes the vast amounts of information coming in through our senses to create a coherent, meaningful picture of the world. Bringing information theory to bear on recent advances in the neurosciences, Loewenstein reveals a web of immense computational power inside the brain. He introduces the revolutionary idea that quantum mechanics could be fundamental to how our minds almost instantaneously deal with staggering amounts of information, as in the case of the information streaming through our eyes.

Combining cutting-edge research in neuroscience and physics, Loewenstein presents an ambitious hypothesis about the parallel processing of sensory information that is the heart, hub, and pivot of the cognitive brain. Wide-ranging and brimming with insight, Physics in Mind breaks new ground in our understanding of how the mind works.

Werner R. Loewenstein was professor of physiology and biophysics at Columbia University and director of its Cell Physics Laboratory. Author of The Touchstone of Life, he lives in Woods Hole, on Cape Cod, Massachusetts.

Praise For Physics in Mind: A Quantum View of the Brain…

Physics World
“This book is a fantastic journey for any reader, but especially for a physicist. In Loewenstein's account, life is a delicate dance between the bits of information and quantized chunks of energy that drive all biological processes. Accordingly, he takes us on an intellectual rollercoaster ride.... Loewenstein is an engaging writer, one who spices his prose with elaborate wordplay, assonance, internal rhymes, puns, metaphors and quotations. All those verbal high jinks go to good use, put into the noble service of communicating hard stuff in a comprehensible fashion.... This is a ripping good read. Each chapter brings novel insights into the fundamental workings of life. Those who buy their ticket and take the ride will emerge breathless, but enlightened.”

Metapsychology Online Reviews
“Physics in Mind makes a bold...argument. It offers a unification of physics and biology on a higher, more sophisticated level than one usually finds. It even offers a plausible glimpse of that storied grail: brain as quantum computer.... [A] significant contribution to outlining the bigger picture.”

Physics World's 2013 Book of the Year
“In the hands of a less scrupulous author, a book such as Physics in Mind could easily have strayed into the world of ‘quantum woo', in which the weird effects of quantum mechanics are conveniently trotted out as the explanation for every problem, with scant regard to evidence. But Loewenstein, despite his enthusiasm for applying physics principles to biological topics, is careful to avoid such traps.... Loewenstein's prose is both distinctive and enticing, and his beautifully clear explanations of more ‘traditional' physics topics such as quantum computing and the cosmological arrow of time are among the best we have seen.”

Jane Smiley, Harper's
“[An] absorbing account…. [Loewenstein's] book is vital and wide-ranging, exploring everything from the structure of time to the phenomenon of gut feelings, the color of white and the reach of our senses, and why we've adapted to notice the anomaly rather than the norm.”

Seth Lloyd, Professor of Quantum-Mechanical Engineering, Massachusetts Institute of Technology, and author of Programming the Universe
“Werner Loewenstein's Physics in Mind is a passionate exploration of how biological systems process information. Starting from how molecules transform information and energy at the most microscopic level, where quantum mechanics plays a central role, Loewenstein provides clear and elegant explanations of the mechanisms of sight and smell, of senses and neural signals, culminating with the phenomenon of consciousness itself. Erudite, witty, and highly accessible, Physics in Mind proves once and for all that the unquantized life is not worth living.”

Trends in Cognitive Science
“Loewenstein takes readers on a delightful journey through one of the greatest scientific challenges of our time: the quest to understand how physics can explain brain function and consciousness. With precise, engaging, and often provocative prose, Loewenstein dares to delve into fundamental questions at the intersection of physics, biology, neuroscience, and philosophy.… Every page explodes with enthusiasm, metaphors, and food for thought. It is not common to find science books that are accurate, without oversimplifications, and yet read like pieces of fiction that cannot be put down.... [A] masterpiece of scientific outreach and discourse. This must-read book will promote vigorous scientific discussion in many circles.”

Psychology Today
“To perceive and understand the world around us, we need to process vast amounts of information. While the brain dedicates dense networks of neurons to the task, biophysicist Loewenstein explains that the heavy lifting is done by a complex array of microscopic particles making calculations at the quantum level.... Ultimately, survival depends on how well an organism can spot patterns and distinguish signal from noise—a test of computational power. It's an indication, Loewenstein notes, that to understand the mysteries of consciousness, we may have to think small.”
or
Not Currently Available for Direct Purchase
Copyright © 2020 American Booksellers Association