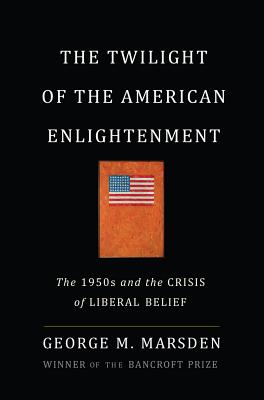 The Twilight of the American Enlightenment (Hardcover)

The 1950s and the Crisis of Liberal Belief

In the aftermath of World War II, the United States stood at a precipice. The forces of modernity unleashed by the war had led to astonishing advances in daily life, but technology and mass culture also threatened to erode the country's traditional moral character. As award-winning historian George M. Marsden explains in The Twilight of the American Enlightenment, postwar Americans looked to the country's secular, liberal elites for guidance in this precarious time, but these intellectuals proved unable to articulate a coherent common cause by which America could chart its course. Their failure lost them the faith of their constituents, paving the way for a Christian revival that offered America a firm new moral vision—one rooted in the Protestant values of the founders.

A groundbreaking reappraisal of the country's spiritual reawakening, The Twilight of the American Enlightenment shows how America found new purpose at the dawn of the Cold War.

Praise For The Twilight of the American Enlightenment: The 1950s and the Crisis of Liberal Belief…

Stephen Prothero, Bookforum
“To his credit, Marsden...does not trot out the nostalgic truisms of the religious right. He does not call for a return to the ‘Christian America' of our founders because he knows that few of the founders were conservative.... Marsden does an excellent job...reminding readers that there are, in fact, plenty of evangelicals on the left, in the middle, and on the right.”

Christianity Today
“[A] compelling study.... [The Twilight of the American Enlightenment] is short, elegantly interpretative, and strongly argued. Marsden writes for an audience of ordinary, thoughtful readers. The prose is a treat: consistently clear, sprightly, and filled with memorable stories.... The legendary Marsden wit sparkles throughout, as do the one liners.... And rather than pretending to possess a God's-eye view, as so many historians do, Marsden humbly acknowledges the limitations of his own perspective.”

The Nation
“Persuasive.... Marsden is, more than any other living scholar of our religious history, a vital and engaged chronicler of the often-tangled byways of dissenting Protestant faith and the ur-American quest for a higher cosmic purpose.”

Richard J. Mouw, Professor of Fath and Public Life, Fuller Theological Seminary
“This remarkable book gives us an insightful narrative of how we have gotten to our present failure to manage increasingly diverse cultural realities in North America. Marsden charts the various efforts over several decades in the last century to sustain a pluralism on the basis of a cultural consensus—both ‘atheists for Niebuhr' and the New Religious Right had their own versions of this project. In exposing the underlying reasons for their failure, Marsden points the way to a challenging but exciting journey toward a truly inclusive pluralism.”

Barry Hankins, Professor of History, Baylor University, and author of Jesus and Gin
“Mid-20th century enlightened intellectuals believed that autonomous individuals steeped in scientific rationality would build a tolerant and inclusive society. In our era of culture wars, it appears that dream has failed. What went wrong? With characteristic clarity and winsome prose, Marsden tackles this question and offers an alternative vision for keeping peace in a pluralistic culture. Anyone seeking to understand American culture and weigh in on the conversation should read this book.”

Grant Wacker, Duke University, author of Heaven Below
“Another masterpiece. In prize-winning works on fundamentalism, university culture, and Jonathan Edwards, Marsden distinguished himself with the erudition and perceptiveness of his analyses. In this study, he displays the same virtuosity. Marsden anchors the center/left consensus of the 1950s in Enlightenment rationalism, minus natural law. So it was that intellectuals of the 1950s laid dynamite in the foundation. They inadvertently precipitated the disarray of the 1960s and the bitterness of the 1970s. Americans are still seeking their bearings. Marsden finds hope in a genuine pluralism that welcomes all thoughtful voices back to the table. Elegantly yet simply written, this brilliant, searching, learned work will stand for years as a tract for the times.”

Darren Dochuk, author of From Bible Belt to Sunbelt: Plain-Folk Religion, Grassroots Politics, and the Rise of Evangelical Conservatism
“Piercing and succinct yet astonishingly elegant, The Twilight of the American Enlightenment anatomizes the mind of 1950s America with the blend of precision and flair, moral conviction and compulsive readability that this era's public intellectuals and informed citizenry, George Marsden's subjects, prized in their literature. Evocative and poignant, Marsden's prose is also vigorous through and through. Marshaling his unmatched historical expertise and command of modern American religion and thought, he guides his reader through the last days of certainty—the early Cold War moment when leading liberal thinkers earnestly shored up their society's shared faith in human freedom and self-determination, individual rights and reason, and the scientific imperative, even as they faced signs of eroding consensus and impending cultural revolution at every turn. Marsden's book is courageous and path-breaking in its recasting of a pivot point—the pivot point—in twentieth-century American life.”

Bloomberg View 10 Best Nonfiction Books of 2014
“In this short, tragic intellectual history of the U.S. in the years after World War II, the author locates the roots of the split between well-educated elites and the masses that endures to this day.”

Washington Post
“[A] fascinating and unusual book.... [Marsden is] one of the most esteemed intellectual historians of his generation.... Marsden's book shines as a clear...introduction to the dominant intellectual voices of the era.”

Wall Street Journal
“[Marsden's] critique of the consensus culture of the 1950s is original and persuasive, and he is dead right to contend, with [Abraham] Kuyper and his intellectual heirs, that the idea of ‘neutrality' is a sham. Mr. Marsden's book won't bring resolution to the conflicts over abortion or same-sex marriage, but his reflections should remind us that America is still ours: We don't have to take it back.”

The Weekly Standard
“[A] thoughtful new book.... [Marsden's] careful analyses of the thought of such fifties eminences as Walter Lippmann, Reinhold Niebuhr, and David Riesman make it clear that the apparent ‘cultural consensus' of the fifties was unstable from the beginning.”

Touchstone
“Few...can account for the changes as lucidly, or with such lightly worn but impressive scholarship as Marsden exhibits in this book.... I cannot capture in a short review the breadth of Marsden's sweep, or the authority with which he weaves many threads of evidence into an unmistakable pattern of meaning.”

The Ecclesial Calvinist
“As we would expect from Marsden, the book is quite readable and engaging.... Especially enjoyable are the more extended treatments of important thinkers.”

Historical Conversations
“Throughout, the writing is done gracefully, and complex issues are treated clearly. This is an engaging and accessible book for anyone willing to think through important issues.”

BreakPoint
“[T]he history that unfolds in The Twilight of the American Enlightenment is wonderfully illuminating for our present day. Understanding the processes by which our present world came to be can only assist current leaders in finding equitable solutions to our national problems.”

Publishers Weekly
“[A] penetrating study of post-war intellectual ferment.... Marsden provocatively diagnoses the decay of a liberal ideology unmoored from philosophical foundations, a decay, he contends, that set the stage for the cultural revolution of the 1960s and a resurgent religious right in the 1970s. Marsden's erudite, sophisticated, but very accessible study reveals the suppressed spiritual hunger of a secular age.”

Public Discourse
“[Marsden] has skillfully crafted a book that tells a historical story that speaks to present dilemmas.... The Twilight of the American Enlightenment is an engaging read that deserves attention. More than an historical account, it is a positive contribution to the conversation of how to pursue the common good and allow many different religious perspectives to flourish today and into the future.”

Post and Courier
“The inability to accommodate diversity among religions, and between religion and secularism, is the issue that Marsden engages. He does so with erudition and profundity.... [I]t is an important book written by one of the significant intellects of our day and it is worth reading, even twice.”

Presbyterian Outlook
“[T]his is an important book because the problem that it highlights, the lack of a philosophical foundation for American society, is only likely to produce more acute divisions in the years ahead.”

City Journal
“[A] short, curious, and at times insightful book.... Marsden rightly argues in his new book that American political culture has been shaped by an alliance between Protestant Christianity and Enlightenment rationality.”

Kirkus
“Marsden employs historical analysis to suggest why the United States is so badly split between secular-oriented intellectuals and religiously doctrinaire church leaders, a split that seems to have harmed the nation's moral character, forged during World War II.... An important discourse.”

Foreign Affairs
“Marsden has the rare ability to describe complex controversies in clear and concise prose.... Although Marsden feels no nostalgia for the flawed consensus of those days, he asks some probing questions about whether today's public conversation is flexible enough to accommodate the increasing pluralism of American society and strong enough to support the values and common purpose that a democratic society requires.”

Washington Monthly
“Why is it so hard for Americans to talk to one another across the ideological divide let alone understand the anxieties of those on the other side? In his new book, the historian George Marsden offers a perspicacious answer.... Marsden is clear-eyed in describing the forces, especially the economic ones, which did so much to weaken community ties and authority in the 1950s and'60s.”

Choice
“Marsden provides a tightly woven narrative that explains both the promises of the enlightenment project and its limitations in navigating within a rapidly growing religiously pluralistic framework.”

Democracy Journal
“[Marsden's] book cuts through the rhetoric of the culture wars to identify some of the basic intellectual problems that divide conservatives and liberals.”

Books and Culture
“George Marsden's latest book has about it the deceptive simplicity of a master at work. Which is another way of saying that it weaves together the familiar and the unfamiliar in a supple and plausible narrative, and with seemingly effortless momentum deposits its readers in territory they would not have thought to visit at the outset of the journey.... [The Twilight of the American Enlightenment] deals with complex ideas in an astonishingly direct and uncomplicated way, and...is entirely accessible to any reader who wants to take the time to read it. Such accessibility reflects the generous and hopeful nature of the author, who has been one of our era's most consistently courageous and admirably original minds in the field of history and of Christian thought. Like everything he writes, The Twilight of the American Enlightenment will be a book to ponder, and reflect upon, for years to come.”

Perspectives: A Journal of Reformed Thought
“If you've read Marsden before, you'll recognize him here: careful, generous, modest in his claims and earnest in his convictions.... Marsden deserves a lot of credit for trying to write history for a wider public, narrating a past for useful guidance for serious moral and civic reflection today.... We need more of this kind of work, not less.”

Wilfred M. McClay, G.T. and Libby Blankenship Chair in the History of Liberty, University of Oklahoma
"In this compact but powerful analysis of American life and thought in the years since the Second World War, George Marsden shows why neither a triumphant secular liberalism nor a restored religious consensus can serve as a rallying point for national unity. Instead, he makes a case for a pluralism that treats the widest possible range of religious and nonreligious perspectives as equally deserving of protections and recognition, and rejects the privatization of religious speech and expression. The result is a book that is as much about dawning as about twilight, one that not only provides a fresh and compelling view of postwar America, but offers a fresh vision of the road ahead, a future in which our emerging debates over the meaning and limits of religious liberty will be of central and growing importance."
or support indie stores by buying on
Copyright © 2020 American Booksellers Association