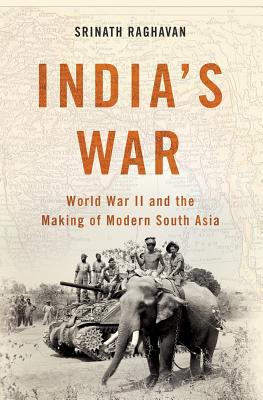 World War II and the Making of Modern South Asia

Between 1939 and 1945 India underwent extraordinary and irreversible change. Hundreds of thousands of Indians suddenly found themselves in uniform, fighting in the Middle East, North and East Africa, Europe and-something simply never imagined-against a Japanese army poised to invade eastern India. With the threat of the Axis powers looming, the entire country was pulled into the vortex of wartime mobilization. By the war's end, the Indian Army had become the largest volunteer force in the conflict, consisting of 2.5 million men, while many millions more had offered their industrial, agricultural, and military labor. It was clear that India would never be same-the only question was: would the war effort push the country toward or away from independence?

In India's War, historian Srinath Raghavan paints a compelling picture of battles abroad and of life on the home front, arguing that the war is crucial to explaining how and why colonial rule ended in South Asia. World War II forever altered the country's social landscape, overturning many Indians' settled assumptions and opening up new opportunities for the nation's most disadvantaged people. When the dust of war settled, India had emerged as a major Asian power with her feet set firmly on the path toward Independence.

From Gandhi's early urging in support of Britain's war efforts, to the crucial Burma Campaign, where Indian forces broke the siege of Imphal and stemmed the western advance of Imperial Japan, Raghavan brings this underexplored theater of WWII to vivid life. The first major account of India during World War II, India's War chronicles how the war forever transformed India, its economy, its politics, and its people, laying the groundwork for the emergence of modern South Asia and the rise of India as a major power.

Srinath Raghavan is a senior fellow at the Centre for Policy Research. He lives in New Delhi, India.

"[A]s Mr. Raghavan's fascinating account of the geopolitics of the war makes clear, there is more at stake in the history of India in World War II than 'rounding out' the story.... The history [Raghavan] writes is inspired by the search for a wider horizon for India as a regional superpower beyond the confining frame bequeathed by World War II and the ragged end of British Empire in Asia. It is all the more important and urgent for that."—Wall Street Journal

"Raghavan usefully supplies the facts, in charts, figures, maps and details of military operations.... He also gives thorough, fascinating and revealing accounts of the economic transformations."—Economist

"Raghavan's panoramic and richly detailed book deserves the accolades that it is receiving as the most comprehensive account of the subcontinent's experiences in the second world war. A historian at King's College London, Raghavan unearths much new detail and displays a masterful grasp of wartime diplomacy and economics."—Financial Times's summer books

"A panoramic work, spanning the deliberations of the highest Allied councils of war to the febrile mood on the streets of Kolkata, formerly Calcutta, in the shadow of the Japanese advance.... Raghavan?s splendid history is a reminder not just of India's historic contribution to the defeat of fascism, but also its geopolitical potential throughout the Indo-Pacific."—Financial Times

"A highly readable account of one of the more complex--and ignored--phase of World War II."—Washington Times

"Raghavan has written what will probably become the standard account of India's involvement in World War II."
—Library Journal

"India's War provides a much-needed window into the wartime experiences of ordinary Indians. As imperial subjects fighting Nazi tyranny, yet denied freedom themselves, the subalterns of the Indian Army found themselves caught between sovereignty and liberty in unknown lands. In making these forgotten voices heard, Raghavan succeeds admirably."—Publishers Weekly

"[Raghavan] is unarguably our finest military historian. Like the best in the genre, he turns the battlefields of the past into pages where we read the backstories of our political existence--and makes history intimate and immediate."—Open Magazine (India)

"Masterly.... Despite the vastness of the fields he has to cover, Raghavan has written a surprisingly comprehensive piece of work, an unlikely but successful combination of both enormous scope and a great depth of detail. An accomplished writer, he guides his readers through the labyrinths of the changing military and political scenes while keeping their interest with flashes of rare detail and personal witness."—The Diplomat (Japan)

"Histories of the Second World War tend to ignore India, and histories of modern India tend to underplay the War. In this superb work of scholarship, Srinath Raghavan comprehensively makes up for decades of neglect by writers and historians.... India's War is a work of immense and enduring importance."—Ramachandra Guha, author of India After Gandhi

"World War II was a crucible that forged the modern identities of South Asian nations in ways rarely acknowledged since.... India's War illuminates that period."—Kirkus Reviews

"An illuminating political, sociological, and historical study of India's role in WWII. Raghavan expertly fills a gap in twentieth-century history and geopolitical collections."—Booklist

"Absorbing and important...this rational and detailed book should start a debate."—Spectator (UK)

"Ambitious.... Raghavan's study fulfills his mission in presenting readers with intertwined narratives of military campaigns, international strategies, and the rise of the freedom struggle that was to determine the future of the subcontinent."—Independent (UK)

"Rarely does one come across a relatively young analyst being as thoughtful and erudite on questions of war, peace and national strategy, as Dr Srinath Raghavan. His book India's War is a comprehensive account of how a 2.5 million-strong Indian Army was raised, trained, equipped and deployed, to fight during the Second World War."—New Indian Express
or support indie stores by buying on
Copyright © 2020 American Booksellers Association