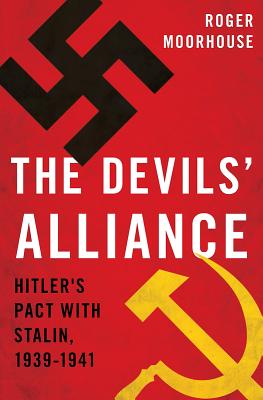 History remembers the Soviets and the Nazis as bitter enemies and ideological rivals, the two mammoth and opposing totalitarian regimes of World War II whose conflict would be the defining and deciding clash of the war. Yet for nearly a third of the conflict's entire timespan, Hitler and Stalin stood side by side as partners. The Pact that they agreed had a profound -- and bloody -- impact on Europe, and is fundamental to understanding the development and denouement of the war.

In The Devils' Alliance, acclaimed historian Roger Moorhouse explores the causes and implications of the Nazi-Soviet Pact, an unholy covenant whose creation and dissolution were crucial turning points in World War II. Forged by the German foreign minister, Joachim von Ribbentrop, and his Soviet counterpart, Vyacheslav Molotov, the nonaggression treaty briefly united the two powers in a brutally efficient collaboration. Together, the Germans and Soviets quickly conquered and divided central and eastern Europe -- Poland, the Baltic States, Finland, and Bessarabia -- and the human cost was staggering: during the two years of the pact hundreds of thousands of people in central and eastern Europe caught between Hitler and Stalin were expropriated, deported, or killed. Fortunately for the Allies, the partnership ultimately soured, resulting in the surprise June 1941 German invasion of the Soviet Union. Ironically, however, the powers' exchange of materiel, blueprints, and technological expertise during the period of the Pact made possible a far more bloody and protracted war than would have otherwise been conceivable.

Combining comprehensive research with a gripping narrative, The Devils' Alliance is the authoritative history of the Nazi-Soviet Pact -- and a portrait of the people whose lives were irrevocably altered by Hitler and Stalin's nefarious collaboration.

Adam Zamoyski, author of Moscow 1812: Napoleon's Fatal March
“In this profoundly researched, briskly argued, and wonderfully readable book—full of dramatic and darkly comic detail—Roger Moorhouse has done history a great service. He has rescued one of the Second World War's dirtiest little secrets from the shadows into which the pro-Soviet bias of post-war historians had swept it, and reveals in all its moral squalor the deal that made it possible for Hitler to go to war.”

Andrew Roberts, author of The Storm of War: A New History of the Second World War
“Superbly researched and academically impeccable, yet written with all the pace of a thriller, The Devils' Alliance shines a powerful beam into one of the undeservedly least known aspects of the Second World War. That conflict could not have taken place without the Pact, so anyone wishing to understand how Hitler could have attacked Poland and France, and when and how he did, must read this book, in which the personalities (and treacheries) are as gigantic as the world events they spawned.”—-

Financial Times, UK
“Moorhouse provides a vivid account, full of primary source material, of the pact's origins and explains how Berlin and Moscow co-operated for almost two years before the partnership collapsed with Germany's invasion of the Soviet Union in June 1941…The Devils' Alliance is a highly enjoyable history written with verve and attention to detail.”

Winnipeg Free Press, CAN
“While the Second World War has been scrupulously documented, analyzed and liberally interpreted, Moorhouse's knack for combining scholarly and comprehensive research with first-hand and eyewitness testimony creates an engaging, informative, and lucid polemic that adds to the canon.”

Open Letters Monthly
“A concrete and well-paced financial and interpersonal accounting of the Russo-German alliance that has not elsewhere been performed nearly as fully as Moorhouse has done here.”

Guardian, UK
“Moorhouse tells a good story and...he is able to add interesting new details. His account of the negotiation and signing of the pact, finalised by Ribbentrop and Molotov, two men who had become foreign ministers of their respective countries through fawning sycophancy towards their respective leaders, is masterly.”

Washington Times
“[A] vivid, well-researched and gripping account.... Mr. Moorhouse's book is a valuable reminder of this most shameful event.”

Telegraph, UK
“Meticulous and vividly readable.... At a time when tensions are once again simmering in the same Eastern European badlands where the “devils' alliance” was forged, Moorhouse's grim and compelling book could not be more topical.”

Independent, UK
“Moorhouse makes an elegant plea for retrieving the Pact from its "place too often in the footnotes", to disentangle the myths from facts and recast erroneous readings.”—-

H-Diplo
“Among the virtues of Roger Moorhouse's lively popular history is that he gives his reader a sense of how historians' understanding of the pact has changed over time as new sources have slowly emerged.... An excellent and vibrant introduction to the subject.”

Publishers Weekly
“Riveting.... Readers of military and diplomatic history as well as those interested in the Holocaust will find this book immensely interesting and informative.”

Kirkus
“A well-researched work offering new understanding of the pact's pertinence to this day.”

Jan T. Gross, Professor of War and Society and Professor of History at Princeton University
“A superb book. Carefully researched and beautifully written, it covers a sorely neglected yet very important chapter of the Second World War. A must-read for anyone even vaguely interested in the history of World War II.”—-

Wall Street Journal
“Superb.... The lesson that Mr. Moorhouse's excellent book teaches us is that there should never again be a Russo-German partition of Eastern Europe into ‘spheres of influence.'”

Foreign Affairs
“Moorhouse captures the essence of the wretched deal better than anyone has before.”

New York Review of Books
“A good account by the British historian Roger Moorhouse of what the pact meant for Hitler and Stalin—and, worse, for its victims. Moorhouse concludes his modest introduction: the history of the Nazi-Soviet Pact ‘deserves to be rescued from the footnotes and restored to its rightful place.... I can only hope that this book makes some small contribution to that process.' It does.”

Christian Science Monitor
“Carefully researched and exceptionally readable.... This volume is an important addition to the vast literature on the war and will be a starting place for readers who want to understand this critical aspect of the conflict. Moorhouse offers a wealth of important insights about this unlikely alliance.”
—-

Roger Moorhouse studied history at the University of London and is a visiting professor at the College of Europe in Warsaw. He is the author of several books on World War II history, including Berlin at War (shortlisted for the Hessell-Tiltman Prize) and The Devils' Alliance. He lives in the United Kingdom.
Loading...
or
Not Currently Available for Direct Purchase