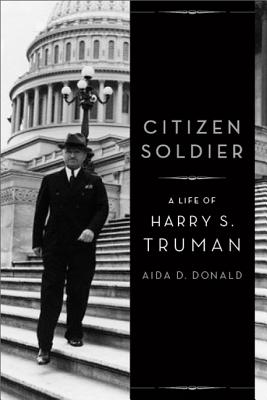 A Life of Harry S. Truman

When Harry S. Truman left the White House in 1953, his reputation was in ruins. Tarred by corruption scandals and his controversial decision to drop nuclear bombs on Japan, he ended his second term with an abysmal approval rating, his presidency widely considered a failure. But this dim view of Truman ignores his crucial role in the 20th century and his enduring legacy, as celebrated historian Aida D. Donald explains in this incisive biography of the 33rd president.

In Citizen Soldier, Donald shows that, for all his failings, Truman deserves recognition as the principal architect of the American postwar world. The son of poor Missouri farmers, Truman overcame professional disaster and personal disillusionment to become something of a hero in the Missouri National Guard during World War I. His early years in politics were tainted by the corruption of his fellow Missouri Democrats, but Truman's hard work and scrupulous honesty eventually landed him a U.S. Senate seat and then the Vice-Presidency. When Franklin Roosevelt passed away in April 1945, Truman unexpectedly found himself at the helm of the American war effort—and in command of the atomic bomb, the most lethal weapon humanity had ever seen. Truman's decisive leadership during the remainder of World War II and the period that followed reshaped American politics, economics, and foreign relations; in the process, says Donald, Truman delineated the complex international order that would dominate global politics for the next four decades. Yet his accomplishments, such as the liberal reforms of the Fair Deal, have long been overshadowed by a second term marred by scandal.

Until we reevaluate Truman and his presidency, Donald argues, we cannot fully understand the world he helped create. A psychologically penetrating portrait, Citizen Soldier candidly weighs Truman's moments of astonishing greatness against his profound shortcomings, offering a balanced treatment of one of America's most consequential—and misunderstood—presidents.

Aida D. Donald is the author of Lion in the White House: A Life of Theodore Roosevelt. She holds a Ph.D. in American history and has taught at Columbia University. Formerly editor-in-chief of Harvard University Press, Donald lives in Lincoln, Massachusetts.

Praise For Citizen Soldier: A Life of Harry S. Truman…

Ellen Fitzpatrick, author of Letters to Jackie: Condolences from a Grieving Nation
“In this wonderfully engaging biography, Aida Donald brings Harry Truman's complexities to life in ways that enrich our understanding of the man and the president. With humor, wit, keen psychological insight, and a sure feel for her subject and his times, Donald offers a fresh and vigorous portrait of the ‘Accidental President' who altered the course of twentieth century American history.”

David Kaiser, author of The Road to Dallas: The Assassination of John F. Kennedy
“Aida Donald has written a succinct and gripping life of one of our most remarkable presidents, marked in particular by an original and highly engaging portrait of Truman as a young man. Truman took more than forty years to discover his real vocation, yet left an enduring mark on the nation and the world.”

Kirkus Reviews
“A skillful psychobiography by an empathetic scholar.”

Publishers Weekly, starred review
“With her research and historical expertise, Donald…has succeeded in making Truman much more than a silent commander of a failed watch, into a fully formed man of sizable defects and masterful achievements.”

Jean H. Baker, Goucher College, author of The Stevensons: The Biography of an American Family
“Crisply and incisively, Aida Donald has provided an absorbing account of Harry Truman's life from poverty to the presidency. In this brief yet comprehensive biography, Donald navigates both the internal and more familiar external challenges that Truman faced throughout his life. There is always something new to say about even the most studied subjects and adroitly and intelligently Donald has done so. Citizen Soldier: A Life of Harry S. Truman is an immensely readable book for both popular and academic audiences.”

Doris Kearns Goodwin, author of Team of Rivals
“No other book about Harry Truman is likely to provide a more intimate portrait of the private man behind the public figure. With penetrating psychological insight, Aida Donald shows how Truman's inner strengths and weaknesses, talents and demons shaped his public career. This is an endlessly fascinating book.”

Alan Brinkley, author of John F. Kennedy
“Aida Donald's Citizen Soldier is a concisely elegant biography of one of the twentieth-century's most important presidents. Reviled by much of the country during his eight years in office, he nevertheless helped create America's role in the world during one of the most difficult and dangerous periods since World War II. ”

Roanoke Times
“Citizen Soldier is a concise account of the life of a man who overcame many failures to become president and made significant contributions to the country he loved.... An inspirational story.”

Maclean's
"Donald convincingly finds the secret to Truman's astounding success — essentially inheriting a prostrate world and managing it until it was on its own feet again — in the president's character."

City Journal
“A stylish and economical introduction to this extraordinary American life.”

Washington Times
"The brevity of this biography serves Ms. Donald's aim of filling in a specific gap in Truman scholarship. She succeeds.... Credit Ms. Donald with some skillful storytelling. At times, the reader has to convince himself that this career loser actually becomes president one day.... A very balanced narrative."

Military Review
“Donald's wit combined with her extensive research and attention to detail make this a biography compelling to any military and historical reader.”

Philip Zelikow, Associate Dean for the Graduate School & White Burkett Miller Professor of History, University of Virginia
“Aida Donald has brought a keen focus back on Harry Truman the person.  Not so much a policy tome, this is about the interior life of a decent, seemingly ordinary person — a kind of real life ‘Mr. Smith' — finding himself drawn more and more to the center of a very messy political world.  The more we recognize Truman as a common man, the more we recognize in him a bit of ourselves, the more we appreciate the way he learns and copes with choices, great and terrible, that marked an age. Donald wears her deep knowledge lightly; her portraiture is swift yet thoughtful.”

Daniel J. Kevles, Stanley Woodward Professor of History, Yale University
“Citizen Soldier rivetingly reveals Truman the man and what shaped him—his family and his wife, battlefield service in World War I, and entanglements with the politics of the Pendergast machine. Donald judiciously takes the measure of his presidency while recounting how the inner man coped with the burden of his momentous decisions, from the atomic bombing of Japan to the waging of war in Korea. A moving and insightful biography. ”
or
Not Currently Available for Direct Purchase
Copyright © 2020 American Booksellers Association