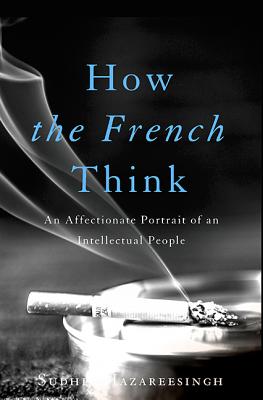 How the French Think

An Affectionate Portrait of an Intellectual People

An award-winning historian presents an absorbing account of the French mind, shedding light on France's famous tradition of intellectual life

Why are the French such an exceptional nation? Why do they think they are so exceptional? The French take pride in the fact that their history and culture have decisively shaped the values and ideals of the modern world. French ideas are no less distinct in their form: while French thought is abstract, stylish and often opaque, it has always been bold and creative, and driven by the relentless pursuit of innovation.

In How the French Think, the internationally-renowned historian Sudhir Hazareesingh tells the epic and tumultuous story of French intellectual thought from Descartes, Rousseau, and Auguste Comte to Sartre, Claude LÃ©-Strauss, and Derrida. He shows how French thinking has shaped fundamental Westerns ideas about freedom, rationality, and justice, and how the French mind-set is intimately connected to their own way of life-in particular to the French tendency towards individualism, their passion for nature, their celebration of their historical heritage, and their fascination with death. Hazareesingh explores the French veneration of dissent and skepticism, from Voltaire to the Dreyfus Affair and beyond; the obsession with the protection of French language and culture; the rhetorical flair embodied by the philosophes, which today's intellectuals still try to recapture; the astonishing influence of French postmodern thinkers, including Foucault and Barthes, on postwar American education and life, and also the growing French anxiety about a globalized world order under American hegemony.

How the French Think sweeps aside generalizations and easy stereotypes to offer an incisive and revealing exploration of the French intellectual tradition. Steeped in a colorful range of sources, and written with warmth and humor, this book will appeal to all lovers of France and of European culture.

Praise For How the French Think: An Affectionate Portrait of an Intellectual People…

"Superb.... Hazareesingh has done more than anyone writing in English to unravel what the sociologist Emmanuel Todd recently called the 'le mystere francais.'"—Prospect (UK)

"Scholarly, penetrating and sometimes very funny.... This is a marvellous, and marvellously readable book: by turns illuminating, affectionate and exasperated."—Independent (UK)

"A stimulating contribution.... In this work [Hazareesingh] displays not only a deep familiarity with French society, but a rare sense for a foreigner of what really matters in French intellectual life once you dig below the surface. He is an excellent teller of tales with a good eye for the revealing anecdote."—New York Review of Books

"Focusing with great intelligence and subtlety on distinctively French conceptions of history, nationhood, democratic participation, existentialism, and the creative tension between order and imagination.... Anyone who loves, loathes, or is just perplexed by self-styled French intellectuals--that is, most educated French people--should read this book.—Foreign Affairs

"[An] engaging, accessible book.... Hazareesingh's superbly researched work traces the history of this spirit, from Descartes, Rousseau and Voltaire to latter-day politicians who talk of France's 'great destiny'. Read this excellent book and next time you witness vigorous finger-pointing in a bistrot, you'll know why the subject being debated is likely to be very lofty indeed!"—France Today

"Hazareesingh has a gift for distilling mounds of information into clear, engrossing prose. This is above all a convivial book, true to its subtitle though not without a finely tuned bullshit detector.... What one comes away with is the unshakable sense that however they do it, the French really do think differently than we do--and this is what we love about them."—New Republic

"Few historians would have the courage to write a book with a title like How the French Think. But few historians know France, and the French, better than Sudhir Hazareesingh. He has brought his formidable knowledge and experience of the country to bear in a book that is consistently engaging and thought-provoking, and written with a light touch that makes it a delight to read."—David Bell, author of The First Total War: Napoleon's Europe and the Birth of Warfare as We Know It

"It is unusual to laugh aloud when reading a history of ideas, but I did so more than once while reading How the French Think. Its sweep is thrilling and its expositions lucid, but it carries its learning lightly and is written with an astringent wit. Everyone interested in France and the French will enjoy and learn from this book."—Robert Tombs, professor of French history at Cambridge University

"Stendhal wrote that a novel was 'un miroir qu'on promene le long d'un chemin.' And no better mirror on the wandering path of French culture of yesterday and today could be found than this wise and gentle book, as learned as it is engaging. Peguy was worried about what God would have to think about if the French were not there to amuse and inform him. Now we know why this might still be so."—Patrice Higonnet, professor of French history at Harvard University

Sudhir Hazareesingh is a Fellow in Politics at Balliol College, Oxford, a Fellow of the British Academy, and author of the prize-winning books The Legend of Napoleon and In the Shadow of the General. He divides his time between Paris and Oxford.
or
Not Currently Available for Direct Purchase