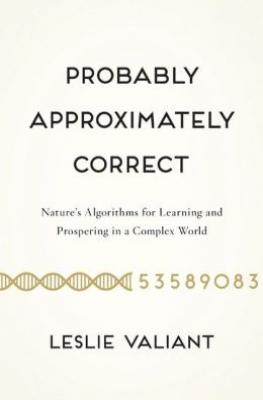 Nature's Algorithms for Learning and Prospering in a Complex World

From a leading computer scientist, a unifying theory that will revolutionize our understanding of how life evolves and learns.

How does life prosper in a complex and erratic world? While we know that nature follows patterns -- such as the law of gravity -- our everyday lives are beyond what known science can predict. We nevertheless muddle through even in the absence of theories of how to act. But how do we do it?

In Probably Approximately Correct, computer scientist Leslie Valiant presents a masterful synthesis of learning and evolution to show how both individually and collectively we not only survive, but prosper in a world as complex as our own. The key is "probably approximately correct" algorithms, a concept Valiant developed to explain how effective behavior can be learned. The model shows that pragmatically coping with a problem can provide a satisfactory solution in the absence of any theory of the problem. After all, finding a mate does not require a theory of mating. Valiant's theory reveals the shared computational nature of evolution and learning, and sheds light on perennial questions such as nature versus nurture and the limits of artificial intelligence.

Offering a powerful and elegant model that encompasses life's complexity, Probably Approximately Correct has profound implications for how we think about behavior, cognition, biological evolution, and the possibilities and limits of human and machine intelligence.

Leslie Valiant is the T. Jefferson Coolidge Professor of Computer Science and Applied Mathematics at Harvard University. He is a Fellow of the Royal Society and a member of the National Academy of Sciences. He is a winner of the Nevanlinna Prize from the International Mathematical Union, and the Turing Award, known as the Nobel of computing.

Praise For Probably Approximately Correct: Nature's Algorithms for Learning and Prospering in a Complex World…

“Computer scientist Leslie Valiant celebrates Alan Turing as the progenitor of a third scientific revolution, potentially as profound as Newton's and Einstein's in transforming our understanding of the world. Why not a ‘fourth revolution'—why omit Darwin? Because, Valiant dares to say, Darwin's theory is radically incomplete, and until it is equipped to make quantitative, verifiable predictions, evolution by natural selection cannot account for the complexity of living things and is not ‘more than a metaphor.' But Valiant offers no drop of succor to creationists. Rather, he seeks to arm neo-Darwinian theory against their onslaughts by elucidating the mechanistic, quantitative basis it must have in a world ‘without a designer.' The algorithms of computational learning theory, he posits, will be key—in particular, a special kind he calls ‘ecorithms,' which incorporate information gathered from the environment to improve an organism's ‘performance.' Turing's heirs have only just begun to plot its equation.”
—The Scientist

“Insightful.... This is science at its best, driven not by dogma and blind belief, but by the desire to understand, intellectual integrity and reliance on facts.... The book is written in a lively, accessible style and is surprisingly entertaining. It's funny how your perception of even mundane tasks can change after reading it—you start thinking algorithmically, confirming Dr. Valiant's maxim that computer science is ‘more about humans than about computers.'”
—New York Times

“[A]n engaging meditation on complexity and on how living things often unwittingly use math to navigate it.”
—Scientific American

“A scholar at the intersection of computing and evolutionary neuroscience, Valiant explores ‘ecorithms': algorithms that learn by interacting with their environment, not from their designer—and so are fundamental to the process of evolution. His text is clear and approachable, with some work; the argument is sweeping.”
—Harvard Magazine

“[Valiant's] major point is that Darwin introduced evolution by natural selection, but the detailed mechanism is still sketchy. A hundred years of genetics has filled in some details, but Valiant sees the computational details as essential and still missing. The goal of this book is to encourage further research and to set a paradigm for such work. As Erwin Schrödinger's What Is Life? inspired those who built molecular biology, Valiant hopes to inspire those who will build a future computational biology. Highly recommended.”
—Choice

“This remarkable book is carefully constructed to give the lay person a sense of subtle problems in mathematics and artificial intelligence, and offers a framework for biologists and computer scientists to use in jointly investigating the most fascinating and enigmatic biological questions.”
—Marc Kirschner, Chair, Department of Systems Biology, Harvard Medical School, and coauthor of The Plausibility of Life: Resolving Darwin's Dilemma

“This book contains a lot of fresh thinking and elegant, nuanced ideas. It is more than probably approximately brilliant. I am amazed by how much insight has been packed into relatively few pages. Anyone interested in computation, learning, evolution, or human nature should find these pages extraordinarily stimulating and informative.”
—Stephen M. Kosslyn, Founding Dean, Minerva University, and former director, Center for Advanced Study in the Behavioral Sciences, Stanford University

“Ecorithms are algorithms that learn from interaction with their environment. This book provides a theoretical framework for understanding the power and limits of ecorithms and applies it to human cognition, biological evolution and artificial intelligence. It is elegantly written and will be accessible to a wide circle of readers.”
—Richard Karp, Turing Award winner and director, Simons Institute for the Theory of Computing, University of California, Berkeley

“This little book is hugely ambitious. It takes on the task of creating a quantitative, mathematical theory to explain all essential mechanisms governing the behavior of all living organisms: survival, learning, adaptation, evolution, cognition and intelligence. The suggested theory has all the characteristics of a great one. It is simple, general, and falsifiable, and moreover seems probably, approximately, correct!”
—Avi Wigderson, Nevanlinna Prize winner and Professor of Mathematics, Institute for Advanced Study, Princeton

“The quest for machines (and codes) that never make mistakes was only a first step toward machines (and codes) that learn from them. Leslie Valiant's Probably Approximately Correct is a detailed, much-needed guide to how nature brought us here, and where technology is taking us next.”
—George Dyson, author of Turing's Cathedral and Darwin among the Machines
or
Not Currently Available for Direct Purchase
Copyright © 2020 American Booksellers Association