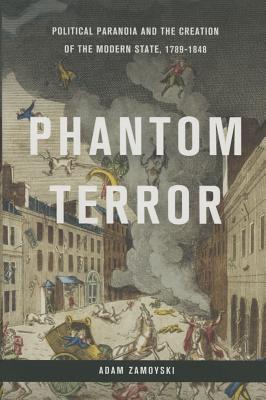 Political Paranoia and the Creation of the Modern State, 1789-1848

For the ruling and propertied classes of the late eighteenth century, the years following the French Revolution were characterized by intense anxiety. Monarchs and their courtiers lived in constant fear of rebellion, convinced that their power-and their heads-were at risk. Driven by paranoia, they chose to fight back against every threat and insurgency, whether real or merely perceived, repressing their populaces through surveillance networks and violent, secretive police action. Europe, and the world, had entered a new era.

In Phantom Terror, award-winning historian Adam Zamoyski argues that the stringent measures designed to prevent unrest had disastrous and far-reaching consequences, inciting the very rebellions they had hoped to quash. The newly established culture of state control halted economic development in Austria and birthed a rebellious youth culture in Russia that would require even harsher methods to suppress. By the end of the era, the first stirrings of terrorist movements had become evident across the continent, making the previously unfounded fears of European monarchs a reality.

Phantom Terror explores this troubled, fascinating period, when politicians and cultural leaders from Edmund Burke to Mary Shelley were forced to choose sides and either support or resist the counterrevolutionary spirit embodied in the newly-omnipotent central states. The turbulent political situation that coalesced during this era would lead directly to the revolutions of 1848 and to the collapse of order in World War I. We still live with the legacy of this era of paranoia, which prefigured not only the modern totalitarian state but also the now preeminent contest between society's haves and have nots.

These tempestuous years of suspicion and suppression were the crux upon which the rest of European history would turn. In this magisterial history, Zamoyski chronicles the moment when desperate monarchs took the world down the path of revolution, terror, and world war.

Praise For Phantom Terror: Political Paranoia and the Creation of the Modern State, 1789-1848…

"Zamoyski, who writes with
flair and an eye for amusing detail, is particularly good on things Russian."—Atlantic

Zamoyski tells us how tyranny was felt on the ground. What results is something vivid, terrifying, and often quite funny.... A superbly drawn story."—Times, UK

"This diligently researched, beautifully written, and passionately argued work of scholarship completely convinces. Adam Zamoyski conclusively proves his case against the reactionary European Legitimist monarchy-dictatorships, and he does so with appropriately aristocratic panache. In so doing he leads an entire herd of sacred cows to the abattoir of history. This is revisionist history at its absolute best."—Andrew Roberts, author of The Storm of War: A New History of the Second World War

"With characteristic
flair and elegance, Adam Zamoyski dissects the paranoia, suspicion, and
conspiracy theories which followed in the wake of the French Revolution.... Phantom Terror is a timely and
original history book, a brilliant guide to the past which will inspire
reflections about the present as well."—Anne Applebaum, Pulitzer Prize-winning author of, Gulag: A History

"A sweeping history of the
rise of state control in Europe from 1789 to 1848... Mr. Zamoyski demonstrates an
impressive command of political history and international relations as he
chronicles the practices of state-sponsored censorship, surveillance and
brutality that, in his view, ultimately prompted the revolutions they were
intended to prevent."—Wall Street Journal