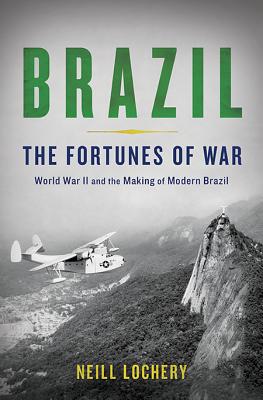 The Fortunes of War

When World War II erupted in 1939, Brazil seemed a world away. Lush, remote, and underdeveloped, the country and its capital of Rio de Janeiro lured international travelers seeking a respite from the drums of the war. “Rio: at the end of civilization, as we know it,” claimed Orson Welles as he set out for the city in 1942. But Brazil’s bucolic reputation as a distant land of palm trees and pristine beaches masked a more complex reality—one that the country’s leaders were busily exploiting in a desperate gambit to secure Brazil’s place in the modern world.

In Brazil, acclaimed historian Neill Lochery reveals the secret history of the country’s involvement in World War II, showing how the cunning statecraft and economic opportunism of Brazil’s leaders transformed it into a regional superpower over the course of the war. Brazil’s natural resources and proximity to the United States made it strategically invaluable to both the Allies and the Axis, a fact that the country’s dictator, Getúlio Dornelles Vargas, keenly understood. In the war’s early years, Vargas and a handful of his close advisors dexterously played both sides against each other, generating enormous wealth for Brazil and fundamentally transforming its economy and infrastructure.

But Brazil’s cozy neutrality was not to last. Forced to choose sides, Vargas declared war on the Axis powers and sent 25,000 troops to the European theater. This Brazilian expeditionary force arrived too late—and was called home too early—to secure a significant role for Brazil in the postwar order. But within Brazil, at least, Vargas had made his mark, ensuring Rio’s emergence as a major international city and effectively remaking Brazil as a modern nation.

A fast-paced tale of war and diplomatic intrigue, Brazil reveals a long-buried chapter of World War II and the little-known origins of one of the world’s emerging economic powerhouses.