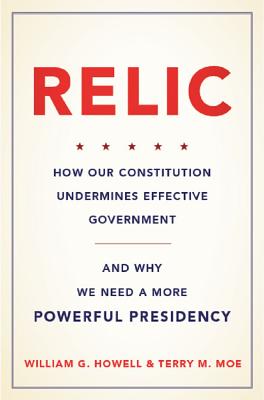 Our government is failing us. From health care to immigration, from the tax code to climate change, our political institutions cannot deal effectively with the challenges of modern society. Why the dysfunction? Contemporary reformers single out the usual suspects, including polarization and the rise in campaign spending. But what if the roots go much deeper, to the nation's founding?

In Relic, William G. Howell and Terry M. Moe point to the Constitution as the main culprit. The framers designed the Constitution some 225 years ago for a simple, agrarian society. But the government they created, with a parochial Congress at its center, is ill-equipped to address the serious social problems that arise in a complex, postindustrial nation. We are prisoners of the past, burdened with an antiquated government that cannot make effective policy, and often cannot do anything at all.

The solution is to update the Constitution for modern times. This can be accomplished, Howell and Moe argue, through reforms that push Congress and all its pathologies to the periphery of the lawmaking process, and bring presidents -- whose concern for their legacy drives them to seek coherent policy solutions -- to the center of decision making. As Howell and Moe reveal, the key to effective government for modern America is a more powerful presidency.

Relic is a provocative and essential book for our era of political dysfunction and popular despair. It sheds new light on what is wrong with our government and what can be done about it, challenging us to reconsider the very foundation of the American experiment.

Praise For Relic: How Our Constitution Undermines Effective Government--and Why We Need a More Powerful Presidency…

“Clear-eyed and unapologetic, Howell and Moe insist that our nation's political woes stem not from our polarized political class but from an outdated Constitution. Anyone interested in our nation's political health will profit from exploring their bracing vision of how that Constitution now protects particularistic interests and propagates dysfunction.”
—Paul Pierson, UC Berkeley, and coauthor of the New York Times bestseller Winner-Take-All Politics

“Howell and Moe deserve immense credit for ‘connecting the dots' between our dangerously dysfunctional political system and an outmoded Constitution. One can only admire their willingness to challenge the cult of the Constitution that afflicts our political culture and hope that their book gets the widespread attention that it so richly deserves.”
—Sanford Levinson, University of Texas Law School, and author of Framed: America's 51 Constitutions and the Crisis of Governance

“Howell and Moe deliver the most concise, devastating account of congressional failure that I have ever read. In calling for a constitutional amendment that would increase the president's power over the legislative process, they have set the terms of debate for years to come.”
—Eric Posner, University of Chicago

“Focused, committed, convincing, and composed in moderate language that will appeal to those all along the political continuum.”
—Kirkus Reviews

“Howell and Moe make the bold and trenchant argument that the dysfunctions of American government lie squarely in the powers that the Founding Fathers gave Congress, and that the solution is to dramatically shift the balance of power to the executive. This book is sure to trigger an important debate, precisely because its fundamental analysis is so correct.”
—Francis Fukuyama, Stanford University, and author of Political Order and Political Decay

William Howell is the Sydney Stein Professor in American Politics at the University of Chicago. His The Wartime President won the William Riker award for the best book in political economy.

Terry Moe is the William Bennett Munro Professor of Political Science at Stanford University and a senior fellow at the Hoover Institution. Moe is a member of the American Academy of Arts and Sciences.
Loading...
or
Not Currently Available for Direct Purchase