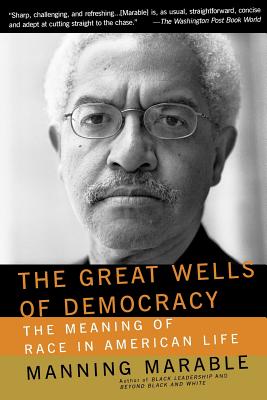 The Great Wells Of Democracy (Paperback)

The Meaning Of Race In American Life

In his boldest and most accessible book to date, Manning Marable lays out a new way to think about the past and the future of race in America. Building upon a unique framework for understanding black history from slavery to Jim Crow to the modern urban ghetto, Marable charts a new course for racial progress. He looks beyond the impasse of liberal strategies such as affirmative action and proposes a new kind of inclusive democracy. Exploding traditional lines of left and right, Marable stakes out such controversial and seemingly incompatible positions as the re-enfranchisement of felons, state support for faith-based institutions, reparations for slavery that systematically inject capital into the black community, and a reconfiguration of racial identities that accounts for the increasingly multi-racial nature of our society. He exhorts us to construct a new political language and practical public policies to bridge the racial divide -- so that we do no less than reinvent the democratic project called America. Combining the breadth of C. Vann Woodward's The Strange Career of Jim Crow with the urgency of Cornel West's Race Matters, Manning Marable offers the most challenging and important book on the politics of race to appear since the heyday of the civil rights movement.