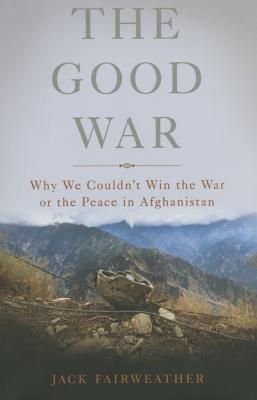 Why We Couldn't Win the War or the Peace in Afghanistan

In its earliest days, the American-led war in Afghanistan appeared to be a triumph—a “good war”—in comparison to the debacle in Iraq. It has since turned into one of the longest and most costly wars in U.S. history. The story of how
this good war went so bad may well turn out to be a defining tragedy of the 21st century—yet as acclaimed war correspondent Jack Fairweather explains, it should also give us reason to hope for an outcome grounded in Afghan reality, rather than our own.

In The Good War, Fairweather provides the first full narrative history of the war in Afghanistan, from its inception after 9/11 to the drawdown in 2014. Drawing on hundreds of interviews, previously unpublished archives, and months of reporting in Afghanistan, Fairweather explores the righteous intentions and astounding hubris that caused the American strategy in Afghanistan to flounder, refuting the long-held notion that the war could have been won with more troops and cash. Fairweather argues that only by accepting the limitations in Afghanistan—from the presence of the Taliban to the ubiquity of the opium trade to the country’s unsuitability for rapid, Western-style development—can America help to restore peace in this shattered land.

A timely lesson in the perils of nation-building and a sobering reminder of the limits of American power, The Good War leads readers from the White House situation room to American military outposts, from warlords’ palaces to insurgents’ dens, to explain how the U.S. and its allies might have salvaged the Afghan campaign—and how we must rethink other “good” wars in the future.

A former foreign correspondent for the Daily Telegraph and the Washington Post, Jack Fairweather won the British Press Award for his reporting on the Iraq invasion and is the author of A War of Choice. Fairweather is currently a Middle East editor and correspondent for Bloomberg News, and he lives in Istanbul with his wife and two daughters.
Loading...
or
Not Currently Available for Direct Purchase