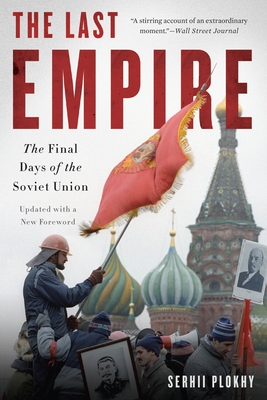 The Final Days of the Soviet Union

On Christmas Day, 1991, President George H. W. Bush addressed the nation to declare an American victory in the Cold War: earlier that day Mikhail Gorbachev had resigned as the first and last Soviet president. The enshrining of that narrative, one in which the end of the Cold War was linked to the disintegration of the Soviet Union and the triumph of democratic values over communism, took center stage in American public discourse immediately after Bush's speech and has persisted for decades -- with disastrous consequences for American standing in the world.

As prize-winning historian Serhii Plokhy reveals in The Last Empire, the collapse of the Soviet Union was anything but the handiwork of the United States. On the contrary, American leaders dreaded the possibility that the Soviet Union -- weakened by infighting and economic turmoil -- might suddenly crumble, throwing all of Eurasia into chaos. Bush was firmly committed to supporting his ally and personal friend Gorbachev, and remained wary of nationalist or radical leaders such as recently elected Russian President Boris Yeltsin. Fearing what might happen to the large Soviet nuclear arsenal in the event of the union's collapse, Bush stood by Gorbachev as he resisted the growing independence movements in Ukraine, Moldova, and the Caucasus. Plokhy's detailed, authoritative account shows that it was only after the movement for independence of the republics had gained undeniable momentum on the eve of the Ukrainian vote for independence that fall that Bush finally abandoned Gorbachev to his fate.

Drawing on recently declassified documents and original interviews with key participants, Plokhy presents a bold new interpretation of the Soviet Union's final months and argues that the key to the Soviet collapse was the inability of the two largest Soviet republics, Russia and Ukraine, to agree on the continuing existence of a unified state. By attributing the Soviet collapse to the impact of American actions, US policy makers overrated their own capacities in toppling and rebuilding foreign regimes. Not only was the key American role in the demise of the Soviet Union a myth, but this misplaced belief has guided -- and haunted -- American foreign policy ever since.

Praise For The Last Empire: The Final Days of the Soviet Union…

"A superb read: a deeply researched, indispensable reappraisal of the fall of the USSR that has the nail-biting drama of a movie, the gripping narrative and colorful personalities of a novel, and the analysis and original sources of a work of scholarship."
—Simon Sebag Montefiore, BBC History Magazine (Best History Books of the Year)

"A fine-grained, closely reported, highly readable account of the upheavals of 1991."
—Financial Times

"Plokhy makes a convincing case that the misplaced triumphalism of the senior Bush's administration led to the disastrous hubris of his son's."
—Slate

"A fascinating and readable deep dive into the final half-year of the Soviet Union."
—Sunday Telegraph (UK)

"A superb work of scholarship, vividly written, that challenges tired old assumptions with fresh material from East and West, as well as revealing interviews with many major players."
—Spectator (UK)

"An incisive account of the five months leading up to the Union's dissolution.... His vibrant, fast-paced narrative style captures the story superbly."
—Sunday Times (UK)

"Serhii Plokhy's great achievement in this wonderfully well-written account is to show that much of the triumphalist transatlantic view of the Soviet collapse is historiographical manure."
—Times of London (UK)

"Plokhy does a good job of debunking much of the conventional wisdom, especially prevalent in the United States, about the American role in the break-up of the Soviet Union.... His setting the record straight is also of more than historiographical significance."
—Times Literary Supplement

"A meticulously documented chronicle of the evil empire's demise.... [Plokhy] is the voice Ukrainians have been yearning for."
—Ukrainian Weekly

"With Crimea annexed and eastern Ukraine starting to break away to Russia, The Last Empire may be the most timely book of the year."—National Review

"One of a rare breed: a well-balanced, unbiased book written on the fall of Soviet Union that emphasizes expert research and analysis."
—Publishers Weekly

Serhii Plokhy is the Mykhailo Hrushevsky Professor of Ukrainian History and director of the Ukrainian Research Institute at Harvard University. The author of The Gates of Europe and The Man with the Poison Gun, most recently, Plokhy is an award-winning author of numerous books. He lives in Arlington, Massachusetts.
Loading...
or
Not Currently Available for Direct Purchase