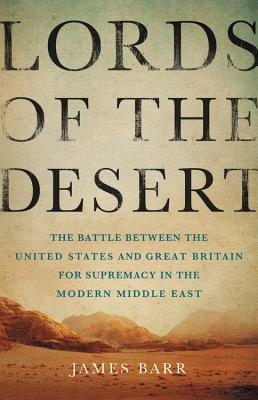 Lords of the Desert

A path-breaking history of how the United States superseded Great Britain as the preeminent power in the Middle East, with urgent lessons for the present day

We usually assume that Arab nationalism brought about the end of the British Empire in the Middle East -- that Gamal Abdel Nasser and other Arab leaders led popular uprisings against colonial rule that forced the overstretched British from the region.

In Lords of the Desert, historian James Barr draws on newly declassified archives to argue instead that the US was the driving force behind the British exit. Though the two nations were allies, they found themselves at odds over just about every question, from who owned Saudi Arabia's oil to who should control the Suez Canal. Encouraging and exploiting widespread opposition to the British, the US intrigued its way to power -- ultimately becoming as resented as the British had been. As Barr shows, it is impossible to understand the region today without first grappling with this little-known prehistory.

Praise For Lords of the Desert: The Battle Between the United States and Great Britain for Supremacy in the Modern Middle East…

"Excellent...Mr. Barr draws on a rich and varied trove of sources
to knit a sequence of dramatic episodes into an elegant whole...What is greatly
to his credit...is the total absence of moral posturing and ideological
partisanship...The 1953 coup against Mosaddegh...reads like a page-turning spy
thriller."—Wall Street Journal

"Barr has mined memoirs and archives to add fresh detail to
his remarkable and dispiriting story...[His] canvas is large, and he daubs it
with colour and human interest...Admirably researched."—Economist

"If you're wondering why things are so intractably turbulent
in places like Syria and Iraq, some suggestive answers emerge from Barr's
book...[Barr] explains much about America's relations with the Arab world-and
with Britain."—Kirkus

"Brilliant, detached and eye-opening...A gripping tale of
diplomatic legerdemain, political hypocrisy and, once the intelligence boys got
going, derring-do."—Times

"A stern indictment of imperial shenanigans in the region...Lords of the Desert bustles impressively with detail and anecdote."—Sunday Times

"Barr contrasts the bumbling self-importance of the British
officials with the ignorant over-confidence of their American
counterparts...Consistently fascinating."—Spectator

"If your'e wondering why things are so intractably turbulent in places like Syria and Iraq, some suggestive answers emerge from Barr's book.... Of considerable interest to students of geopolitics, one that explains much about America's relations with the Arab world--and with Britain."—Kirkus Reviews

"With its oil and its waterways, the Middle East was and remains a first step for any rising world power, and also the final trap for empires on the decline. In this lively page-turner, Barr unearths the obscure history of our disastrous engagement with the Middle East today--and of our own imperial decline."—Elizabeth F. Thompson, Mohamed S. Farsi Chair of Islamic Peace, American University

"Many of the events in this book will be familiar, but instead of presenting them from the more usual perspectives of the Cold war confrontation between the US and Russia, or Imperial withdrawal, James Barr considers them instead from the angle of US-British rivalry. This is refreshing, but it is perhaps also closer to the angle from which many contemporaries would have considered the Suez canal crisis of 1956 or the coup that removed Mohammad Mosaddeq in 1953, for example. This book is therefore not just an excellent, lively account of salient events in this period in the history of the Middle East; it also opens up some new ways to think about them."—Michael Axworthy, author of A History of Iran: Empire of the Mind

"In this compelling new book, James Barr recalls a now forgotten story of British-American competition for power in the Middle East during and after their victory in the Second World War. This is essential, gripping history with major relevance for those who wish to understand that tortured region today."—Nicholas Burns, professor, Harvard University and former Under Secretary of State

"High adventure and covert action meet in this account of a momentous power shift that decisively shaped today's world. Lords of the Desert reshapes our understanding of the modern Middle East--and also helps explain how the United States became a global power."—Stephen Kinzer, author of All the Shah's Men and Overthrow

"James Barr lifts the curtain on British plotting and intrigue in the Middle East. A wonderful raconteur, Barr brings to life the characters whose schemes and miscalculations brought an end to Britain as a great power. Meticulously researched, Lords of the Desert provides ample evidence as to why people in Middle Eastern countries remain so suspicious of Western intentions. A superb book."—Emma Sky, author of The Unraveling

"An essential book for understanding the modern Middle East--and a thrilling read to boot."—Alex von Tunzelmann, author of Blood and Sand

"A masterful account of Anglo-American rivalries that shaped the modern Middle East after WWII--brilliant storytelling with a rich cast of characters, Lords of the Desert is irresistible reading."—Eugene Rogan, author of The Fall of the Ottomans

James Barr is a visiting fellow at King's College London and the author of A Line in the Sand and Setting the Desert on Fire. He lives in London.
Loading...
or support indie stores by buying on