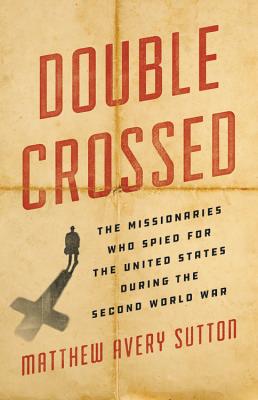 The untold story of the Christian missionaries who played a crucial role in the allied victory in World War II
What makes a good missionary makes a good spy. Or so thought "Wild" Bill Donovan when he secretly recruited a team of religious activists for the Office of Strategic Services. They entered into a world of lies, deception, and murder, confident that their nefarious deeds would eventually help them expand the kingdom of God.
In Double Crossed, historian Matthew Avery Sutton tells the extraordinary story of the entwined roles of spy-craft and faith in a world at war. Missionaries, priests, and rabbis, acutely aware of how their actions seemingly conflicted with their spiritual calling, carried out covert operations, bombings, and assassinations within the centers of global religious power, including Mecca, the Vatican, and Palestine. Working for eternal rewards rather than temporal spoils, these loyal secret soldiers proved willing to sacrifice and even to die for Franklin Roosevelt's crusade for global freedom of religion. Chosen for their intelligence, powers of persuasion, and ability to seamlessly blend into different environments, Donovan's recruits included people like John Birch, who led guerilla attacks against the Japanese, William Eddy, who laid the groundwork for the Allied invasion of North Africa, and Stewart Herman, who dropped lone-wolf agents into Nazi Germany. After securing victory, those who survived helped establish the CIA, ensuring that religion continued to influence American foreign policy.
Surprising and absorbing at every turn, Double Crossed is the untold story of World War II espionage and a profound account of the compromises and doubts that war forces on those who wage it.

Praise For Double Crossed: The Missionaries Who Spied for the United States During the Second World War…

"Matthew Sutton shows
in this lively and fascinating book, the road from preaching the gospel to
learning the dark arts of spy- craft was mapped out by Reinhold Niebuhr's
theory that, Jesus's teachings aside, in a fallen world, state-sanctioned
violence can be justified to destroy regimes."—Times Literary Supplement

"Arresting and informative.... Double Crossed is a great read and a fresh, archive-intensive contribution to our understanding of American intelligence during World War II."—Washington Post

"Not only a profound history of American Christian missions but also one of the most original and interesting histories of World War II in several decades."—Christianity Today

"Sutton covers new territory in his interesting endeavor, as the work of the four has largely been secret until now. Readers will be fascinated by his revelations."—
Booklist

"Recommended for scholars of World War II and religious history, and the history of espionage, as well as general readers interested in the intersection of American history and Christianity."—Library Journal

"Sutton's research is impressive, his writing is clear, and his account is exhaustive.... Sutton rescues a crucially important story that raises profound questions regarding the relationship between God and country."—Kirkus

"This provocative book illuminates little-discussed history and raises larger philosophical questions. It is an unusually fresh and intelligent addition to WWII literature."—Publishers Weekly

"A marvelous book about the holy spooks of World War II: the missionaries who toiled in secret and to considerable effect in the U.S. intelligence effort, convinced they were advancing both God's and America's cause. Matthew Sutton is a generous, discerning historian, and he succeeds splendidly in bringing this little-known story to life."—Fredrik Logevall, Pulitzer Prize-winning author of Embers of War: The Fall of an Empire and the Making of America's Vietnam

"Deeply-researched and engagingly written, Matthew Sutton's Double Crossed fills a gap in the literatures on 20th century secret-intelligence and the Second World War. Shinning a light on the cross-and-dagger intrigues of Protestant missionaries who spied against the Axis, Sutton shows how they helped lay some of the moral and even diplomatic foundations for what we now call globalization. This is both an adventure story and an important contribution to the emerging study of religion as a handmaiden of 20th-century secular power."—Mark Riebling, author of Church of Spies: The Pope's Secret War Against Hitler

"In this absorbing book, Matthew Sutton skillfully and effortlessly guides his reader through the life-and-death clandestine operations of the United States' missionary-spies: bible-believing spooks who, during WWII, grappled internally with the contradictions of faith and violence, deep love of family, and patriotic duty but who never shied away from advancing the Allied cause -- no matter the cost. Double Crossed is an authoritative and highly revealing account of a (purposely) hidden facet of church-state collusion in modern America."—Darren Dochuk, author of Anointed With Oil: How Christianity and Crude Made Modern America

"Double Crossed tells an astonishing and heretofore unknown story of the Christian missionaries and religious activists who doubled as American spies during World War II. Although their wartime scheming often conflicted with their religious principles, the work of the four men profiled here -- whose covert operations ranged from Europe to China and across the Middle East -- was absolutely critical to the success of U.S. military strategy and diplomacy, and it built the edifice for religious collaboration with espionage that, for better or worse, persists in the CIA to this day. Matthew Sutton has written a deeply researched, captivating, and indispensable contribution to our understanding of the role of religion in the history of American spycraft."—Marie Griffith, author of Moral Combat: How Sex Divided American Christians and Fractured American Politics

"In a thrilling and remarkably original narrative, Matthew Avery Sutton explains the critical part missionaries played in American espionage during what was, for them, a holy war to save Christian civilization. For anyone who cares about the history of religion or the Second World War, this fine book will be a revelation."—Michael Kazin, author of War Against War: The American Fight for Peace, 1914-1918

"In this brilliant book, Matthew Avery Sutton has recovered the long-hidden history of Americans who blurred the line between religious missions and secret missions in the Second World War. Rooted in painstaking research and written with powerful prose, Double Crossed is a must-read."—Kevin M. Kruse,
author of One Nation Under God: How Corporate America Invented Christian America