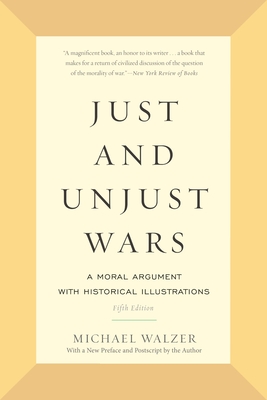 A Moral Argument with Historical Illustrations

“A classic in the field” (New York Times), this is a penetrating investigation into moral and ethical questions raised by war, drawing on examples from antiquity to the present.

Just and Unjust Wars has forever changed how we think about the ethics of conflict. In this modern classic, political philosopher Michael Walzer examines the moral issues that arise before, during, and after the wars we fight. Reaching from the Athenian attack on Melos, to the Mai Lai massacre, to the war in Afghanistan and beyond, Walzer mines historical and contemporary accounts and the testimony of participants, decision makers, and victims to explain when war is justified and what ethical limitations apply to those who wage it.

Praise For Just and Unjust Wars: A Moral Argument with Historical Illustrations…

"A magnificent book, an honor to its writer...a book that makes for a return of civilized discussion of the question of the morality of war."—New York Review of Books

"A passionate defense of the old principle of non-combatant immunity.... [Walzer] is both thorough and persuasive in his exploration of a very intricate subject."—Washington Post

"A classic in the field."—New York Times

"One of the most significant modern restatements of just-war thinking."—Nation

"A clear, humane, and startingly original survey of the moral issues that complicate modern war-making."—Atlantic

Michael Walzer is professor emeritus of social science at the Institute for Advanced Study, Princeton, NJ, and the author of many widely heralded books, including Spheres of Injustice, Exodus and Revolution, and The Company of Critics.
Loading...
or support indie stores by buying on