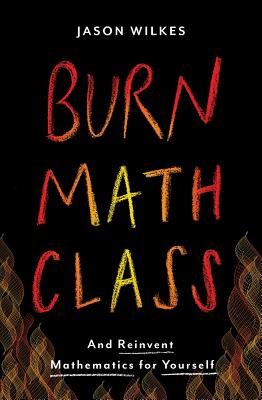 And Reinvent Mathematics for Yourself

A manifesto for a mathematical revolution

Forget everything you've been taught about math. In Burn Math Class, Jason Wilkes takes the traditional approach to how we learn math -- with its unwelcoming textbooks, unexplained rules, and authoritarian assertions-and sets it on fire.

Focusing on how mathematics is created rather than on mathematical facts, Wilkes teaches the subject in a way that requires no memorization and no prior knowledge beyond addition and multiplication. From these simple foundations, Burn Math Class shows how mathematics can be (re)invented from scratch without preexisting textbooks and courses. We can discover math on our own through experimentation and failure, without appealing to any outside authority. When math is created free from arcane notations and pretentious jargon that hide the simplicity of mathematical concepts, it can be understood organically -- and it becomes fun!

Following this unconventional approach, Burn Math Class leads the reader from the basics of elementary arithmetic to various "advanced" topics, such as time-dilation in special relativity, Taylor series, and calculus in infinite-dimensional spaces. Along the way, Wilkes argues that orthodox mathematics education has been teaching the subject backward: calculus belongs before many of its so-called prerequisites, and those prerequisites cannot be fully understood without calculus.

Like the smartest, craziest teacher you've ever had, Wilkes guides you on an adventure in mathematical creation that will radically change the way you think about math. Revealing the beauty and simplicity of this timeless subject, Burn Math Class turns everything that seems difficult about mathematics upside down and sideways until you understand just how easy math can be.

Jason Wilkes holds an MS in mathematical physics and an MA in psychology. He is currently a graduate student in evolutionary psychology at the University of California, Santa Barbara.

Praise For Burn Math Class: And Reinvent Mathematics for Yourself…

"Jason Wilkes' spirited, hip-nerdy Burn Math Class is what high school math might look like if it were redesigned by people who loved math but hated high school."—Jordan Ellenberg, author of How Not To Be Wrong: The Power of Mathematical Thinking

"With this wonderful book, Jason Wilkes uses a radical new approach to teach readers a way to assemble for themselves areas of mathematics that once seemed difficult. Fascinating, funny, and thoroughly engaging, this is one of those highly original books that come along once a decade. Not a coffee table book for someone who wants to look educated--it is instead a book for people who actually want to be educated--for someone who wants to take mathematics into his bones."—John Tooby, Professor of Anthropology and Co-Director, Center for Evolutionary Psychology, University of California, Santa Barbara
or
Not Currently Available for Direct Purchase
Copyright © 2020 American Booksellers Association