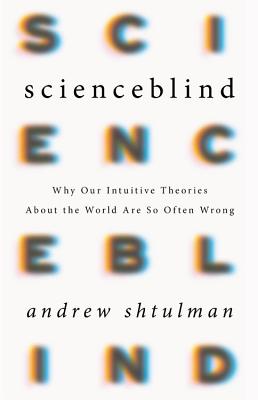 Why Our Intuitive Theories About the World Are So Often Wrong

Humans are born to create theories about the world -- unfortunately, we're usually wrong and bad theories keep us from understanding science as it really is

Why do we catch colds? What causes seasons to change? And if you fire a bullet from a gun and drop one from your hand, which bullet hits the ground first? In a pinch we almost always get these questions wrong. Worse, we regularly misconstrue fundamental qualities of the world around us. In Scienceblind, cognitive and developmental psychologist Andrew Shtulman shows that the root of our misconceptions lies in the theories about the world we develop as children. They're not only wrong, they close our minds to ideas inconsistent with them, making us unable to learn science later in life. So how do we get the world right? We must dismantle our intuitive theories and rebuild our knowledge from its foundations. The reward won't just be a truer picture of the world, but clearer solutions to many controversies -- around vaccines, climate change, or evolution -- that plague our politics today.

Praise For Scienceblind: Why Our Intuitive Theories About the World Are So Often Wrong…

"[A] fascinating, empathetic book....Mr. Shtulman distills some useful ways to improve science education in the classroom and for the adult public."
—Wall Street Journal

"This timely, important, and well-crafted book by Shtulman voices a convincing and unsettling argument about the persistence of science denial that has even broader implications for the state of public discourse.... [A] thoughtful analysis."
—Publishers Weekly

"Although this book is thoroughly researched with a wealth of scholarly sources cited, Shtulman reaches a broad audience by investigating topics that everyone can understand."
—Library Journal

"In Scienceblind, Andrew Shtulman vividly presents an original and important idea, one that is highly relevant to science education, the public understanding of science, and the role of science in intellectual life."—Steven Pinker, Johnstone Professor of Psychology, Harvard University, and the author of How the Mind Works and The Stuff of Thought

"Anti-vaxxers, creationists, global warming skeptics... I have devoted my career to understanding why people deny science in the teeth of overwhelming evidence. As the cognitive psychologist Andrew Shtulman shows in one of the most important books ever written on this most important subject, it turns out that it isn't the facts in dispute, but incorrect intuitive theories people hold about the world underlying the facts that is the problem. In this new age of fake news and pseudo facts, Scienceblind is a candle in the dark."
—Michael Shermer, Publisher of Skeptic magazine, columnist for Scientific American, and author of Why People Believe Weird Things, Why Darwin Matters, and The Moral Arc

"At last, a fantastic book for the general reader on what intuitive theories are and why they are so important to our daily lives. Shtulman explains why we are all vulnerable to intuitive misconceptions, the potential harm intuitions can wreak, and why we should all follow Carl Sagan's advice, 'I try not to think with my gut.'"
—Bruce Hood, author of The Self Illusion and founder of Speakezee.org

Andrew Shtulman is an associate professor of psychology and cognitive science at Occidental, where he directs the Thinking Lab. His work has been featured in Scientific American, CBS News, and the New Yorker. He lives in Pasadena, California.
Loading...
or support indie stores by buying on