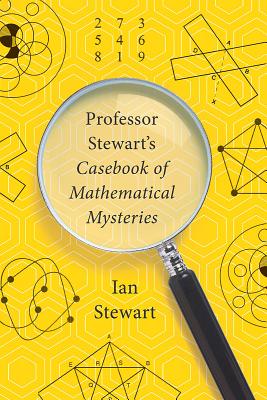 In Professor Stewart's Casebook of Mathematical Mysteries, acclaimed mathematician Ian Stewart presents an enticing collection of mathematical curios and conundrums. With a new puzzle on each page, this compendium of brainteasers will both teach and delight.

Guided by stalwart detective Hemlock Soames and his sidekick, Dr. John Watsup, readers will delve into almost two hundred mathematical problems, puzzles, and facts. Tackling subjects from mathematical dates (such as Pi Day), what we don't know about primes, and why the Earth is round, this clever, mind-expanding book demonstrates the power and fun inherent in mathematics.

"[A] fun-filled math puzzle book.... that is sure to hold a puzzle enthusiast's attention for hours."—New York Journal of Books

"Add a few jokes, a few serious applications, and plenty of references for further online exploration, and the result is another fine book from Stewart."—Choice

"Ian Stewart has produced a captivating book of puzzles, peculiar facts, miscellaneous items of interest.... This book can be enjoyed by both the serious student of mathematics as well as a more casual observer and is accessible to all."—MAA Reviews

"[A] really good pub book--something that you can read and use to impress and entertain your drinking buddies without causing them to question their reason for drinking with you in the first place."—GrrlScientist, UK