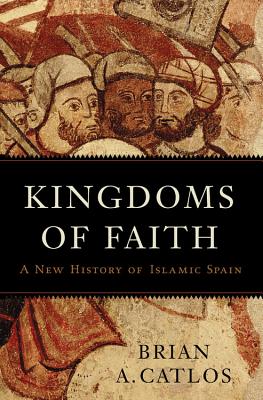 A New History of Islamic Spain

A magisterial, myth-dispelling history of Islamic Spain spanning the millennium between the founding of Islam in the seventh century and the final expulsion of Spain's Muslims in the seventeenth

In Kingdoms of Faith, award-winning historian Brian A. Catlos rewrites the history of Islamic Spain from the ground up, evoking the cultural splendor of al-Andalus, while offering an authoritative new interpretation of the forces that shaped it.

Prior accounts have portrayed Islamic Spain as a paradise of enlightened tolerance or the site where civilizations clashed. Catlos taps a wide array of primary sources to paint a more complex portrait, showing how Muslims, Christians, and Jews together built a sophisticated civilization that transformed the Western world, even as they waged relentless war against each other and their coreligionists. Religion was often the language of conflict, but seldom its cause -- a lesson we would do well to learn in our own time.

Praise For Kingdoms of Faith: A New History of Islamic Spain…

"A brilliant narrative history of the rise and fall of Muslim Spain. This balanced, lucid, and myth-breaking account sheds light on a unique society that has too often been demonised, romanticised or simplified."
—Matthew Carr, author of Blood and Faith: The Purging of MuslimSpain, 1492-1614

"Spirited, probing and original, this is a key history of Muslim Spain. Its unique perspective illuminates the vexed issue of religious, political and cultural interaction between Christians, Jews and Muslims, revealing its vital importance to the history of modern Europe."
—Elizabeth Drayson, University of Cambridge, author of The Moor's Last Stand

"Mediterranean studies have been shaped in an informative and
innovative way by Brian Catlos's contributions in the recent decades. His
incursion now into the history of a specific region and polity--that of
al-Andalus (Medieval Iberia under Muslim rule)--brings to the fore the same
qualities that characterize his previous work: an inquisitive and incisive mind
that homes in on perceptive questions, combined with the ability to recreate
past events in an appealing manner for a wide audience."


—Maribel Fierro, research professor at the Institute of Languages and Cultures of the Mediterranean, CSIC (Madrid), -

"Kingdoms of Faith constitutes a fresh and original contribution to the history of al-Andalus, rooted in the author's profound knowledge of medieval Iberian history. Brian Catlos has managed to produce a very well-written and lively narrative that provides an up-to-date synthesis of the most recent developments in this field of history."—Alejandro García Sanjuán, University of Huelva, -

"Brian Catlos's Kingdoms of Faith offers an insightful and nuanced view of Islamic Spain from its origins in the eighth century to the poignant demise of Islamic presence, as exemplified by his brilliant reflection on Cervantes's fictional Morisco character, Ricote. Based upon a masterly command of sources and the secondary literature, Catlos eschews the hyperbolic descriptions of Islam in Iberia and the exaggerated claims of tolerance while, at the same time, showing its many accomplishments and enduring legacy. It is a brilliant, well-written, and well-researched book that will force historians to see the Islamic presence in the peninsula in a new light."—Teofilo F. Ruiz, distinguished professor of history, UCLA

"This is a lively and interesting new account of medieval Spain and Portugal which steers away from the usual stereotypes and gives us a new, and much more nuanced, account of relations and interactions between the various communities and faith groups in the peninsula."
—Hugh Kennedy, professor of Arabic at SOAS, University of London and author of Caliphate:The History of an Idea

"In Kingdoms of Faith, Brian A. Catlos takes us through the kaleidoscopic interplay of Muslim-Christian relations, bringing clarity to a complex narrative. His deft analysis illuminates the forces brought to bear in creating both the myth and reality of life in 'Moorish' Spain."—Thomas F. Glick,professor of history, emeritus, Boston University

Brian A. Catlos is a professor of religious studies at the University of Colorado at Boulder. His books have won numerous awards, including the American Historical Association's Premio del Rey Award and John E. Fagg Prize. Catlos lives in Boulder, Colorado, and Barcelona, Spain.
Loading...
or support indie stores by buying on
(This book is on backorder)