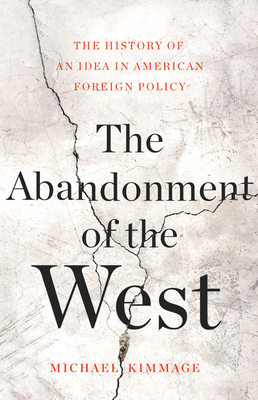 The Abandonment of the West

The History of an Idea in American Foreign Policy

This definitive portrait of American diplomacy reveals how the concept of the West drove twentieth-century foreign policy, how it fell from favor, and why it is worth saving.
Throughout the twentieth century, many Americans saw themselves as part of Western civilization, and Western ideals of liberty and self-government guided American diplomacy. But today, other ideas fill this role: on one side, a technocratic "liberal international order," and on the other, the illiberal nationalism of "America First."
In The Abandonment of the West, historian Michael Kimmage shows how the West became the dominant idea in US foreign policy in the first half of the twentieth century -- and how that consensus has unraveled. We must revive the West, he argues, to counter authoritarian challenges from Russia and China. This is an urgent portrait of modern America's complicated origins, its emergence as a superpower, and the crossroads at which it now stands.

Praise For The Abandonment of the West: The History of an Idea in American Foreign Policy…

"The Abandonment of the West meticulously chronicles a tragic phenomenon as only an observer of his caliber can. A fascinating wakeup call and a call for action for America to revive the beautiful vision we invented."—John Kerry, United States Secretary of State, 2013 to 2017

"Michael Kimmage has written a deeply thoughtful, sensitive book that will confound the expectations of readers expecting a triumphalist defense of 'the West.' On the contrary, Kimmage explores the many contradictions underpinning the historical evolution of the very concept of the West, particularly for the 'post-Columbian Republic' that the United States has become. It is a book that rewards careful reading and reflection, one that I would recommend for students, scholars, and foreign policy advisers everywhere."—Anne-Marie Slaughter, CEO, New America

"This is an intelligent, convincing, and highly readable account of one of the biggest ideas in American foreign policy: The West. With vivid examples, Kimmage shows how America's cultural affinity with a mythical 'Western civilization' first rose to the center of U.S. foreign policy in the late nineteenth century and why it triumphed during the Cold War. Since then, the idea of a mythical West has almost totally collapsed. Kimmage reveals why that is and how foreign policy leaders today can recuperate a new uniting idea to guide the United States in the years to come."—Caroline Winterer, William Robertson Coe Professor in History and American Studies, Stanford University

"World War I, World War II, and the Cold War were all wars of East against West, but in the post-Cold War period, the idea of the West has lost its role within American foreign policy. It is the cultural changes within the American society rather than any geopolitical shifts that explain this change, argues Michael Kimmage, in his elegantly written and thoroughly researched new book."—Ivan Krastev, author of After Europe

"In this disturbing and important book, a first rate intellectual historian, who has also served in government, reflects on the decline of the idea that once gave coherence to American foreign policy: the West. Michael Kimmage's range of learning and contemporary insight is remarkable, and his exploration of how the West fell victim, in part, to its own success is not a counsel of despair but rather a call to considered action."—Eliot A. Cohen, Dean, Johns Hopkins School of Advanced International Studies

"To know where we stand, we must understand where we come from. In The Abandonment of the West, Michael Kimmage takes readers on a revealing journey through the history and influence of the idea of 'the West' on U.S. foreign policy. This is an important book for all those who want to better understand the complex and multifaceted relationship between the U.S. and Europe. Kimmage's work makes it clear what is at stake for us as Europeans when U.S. foreign policy abandons its relationship with the idea of the West. This is a wake-up call to Europe to promote the West-and not to give up its ideals."—SigmarGabriel, former German Vice Chancellor and Federal Minister for ForeignAffairs

"This is an exceedingly important book and certainly one that would benefit all American readers who wonder how we arrived at our current status in an increasingly interconnected world."—Library Journal

Michael Kimmage is a professor of history at the Catholic University of America, specializing in the history of the United States, Europe, and Russia. A member of the secretary's policy planning staff at the US Department of State from 2014 to 2016 and the author of two books, he lives with his wife and two daughters in Washington, DC.
Loading...
or support indie stores by buying on