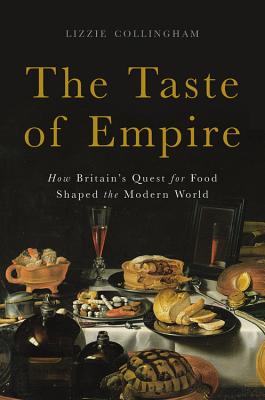 The Taste of Empire (Hardcover)

How Britain's Quest for Food Shaped the Modern World

In The Taste of Empire, acclaimed historian Lizzie Collingham tells the story of how the British Empire's quest for food shaped the modern world. Told through twenty meals over the course of 450 years, from the Far East to the New World, Collingham explains how Africans taught Americans how to grow rice, how the East India Company turned opium into tea, and how Americans became the best-fed people in the world. In The Taste of Empire, Collingham masterfully shows that only by examining the history of Great Britain's global food system, from sixteenth-century Newfoundland fisheries to our present-day eating habits, can we fully understand our capitalist economy and its role in making our modern diets.

Lizzie Collingham is an associate fellow at the University of Warwick. The author of three books, including The Taste of War and Curry, Collingham lives in Cambridge, United Kingdom.


Praise For The Taste of Empire: How Britain's Quest for Food Shaped the Modern World…


Book of the Week on BBC Radio 4

"Collingham
writes about the British Empire from a unique perspective.... The history of West
Indian sugar, African slavery, and American colonization is an oft-told tale,
but Collingham takes mere mercantilism and expands and deepens its consequences."—Booklist, starred review

"Joyously delicious.... In her original and supremely captivating book, [Collingham] has cleverly recreated the fine details of some 20 meals, consumed for four and a half centuries in a variety of homes and ships and tented encampments far from the motherland.... In British terms, she is Henry Mayhew and Mass-Observation rolled into one--a stellar observer of the day-to-day and the mundane, a social historian of extraordinary talent."—New York Times Book Review

"The entwined histories of food and British imperialism...have been strangely overlooked in the decades of research since. In The Taste of Empire, Lizzie Collingham puts that neglect to rights, showing in a tour de force of synthesis that food was one of the driving forces of empire and helped form the eating habits of the entire modern world...Collingham's great achievement is to take [the empire's] food history out of the realm of cozy nostalgia and show it for the potent economic and political force it was."
—Wall Street Journal

"The Taste of Empire...is fascinating reading, and its central point is more than clear: Britain's many hungers shrank the world in ways that are still nearly impossible to untangle.... Whether you're a foodie or a history buff, this should be a satisfying read; sometimes the best way to history's heart is through its stomach."—NPR

"Collingham...sees trade in sugar, spice, rice and tea as the reason the British were so keen to command sea routes dating from the 16th century.... The result is the stuff of lively cocktail party conversation among the geekiest of food lovers, right down to the occasional recipe for mock turtle, rum punch and (Hello, Bridget Jones!) leftover turkey curry."—Washington Post

"Lizzie Collingham's fascinating new book, The Taste of Empire, demonstrates that a cup of tea is never just a cup of tea--it is a history of trade, exchange, land-grab, agricultural innovation and economic change.... This is a marvelously wide-ranging and readable book, stuffed with engaging details and startling connections."
—Financial Times

"An original and thought-provoking book and for all the shocking accounts of the consequences of British appetites, a highly entertaining one."
—The Times (UK)

"There are many factors that drove Britain's centuries-long quest for world domination. But one of the biggest, argues historian Lizzie Collingham...was a taste for better, more exotic food, from India's pepper and tea to Barbados' sugar."—Time Magazine

"Usually it is assumed that Britain's empire appeared and then Britain's food trade-that vast tonnage of tea, flour, sugar, bully beef and Crosse & Blackwell pickle that swept across the seven seas-appeared to feed it. Ms. Collingham turns that idea neatly on its head. It was not so much the empire that began the trade, but trade that began the empire."—Economist

"An energetic and
refreshing account of a little considered aspect of British history.... A
remarkable achievement."—Guardian

"This is a wholly pleasing book, which offers a tasty side dish to anyone exploring the narrative history of the British Empire."
—Max Hastings, Sunday Times (UK)

"Beyond gold and glory, an insatiable lust for foreign foods drove the juggernaut of British imperialism. So shows Lizzie Collingham in this rich economic history, drawing on annals military, mercantile and domestic to reveal the complex routes along with the fruits of the colonial fields and fisheries were shunted into Britain's dining rooms."
—Nature

"Deeply researched and highly readable, [Collingham's] book takes on the sprawling subject of how 450 years of British colonialism affected foodways the world over.... Engaging."—Globe and Mail (Toronto)

"Enjoyable for historians and gastronomes alike...Collingham has built a banquet of British history and culture that shows how the world's largest empire followed food to the pinnacle of its power."—Roanoke Times

"The Taste of Empire is a
fascinating history of exactly how food shaped and informed colonialism, and
vice versa.... Collingham explores these connections in compelling prose, making
human stories central to her investigation."—Atlantic

"Fascinating.... Although Collingham does not flinch from the
cruelties and brutalities of the empire, she refrains from the
self-congratulatory finger-wagging indulged in by some modern historians."—Daily Telegraph (UK)

"This ingeniously constructed history shows that what we think of as personal appetites have largely been constructed by the machinations of empire. The Taste of Empire uses vivid snapshots of meals to tell the story of how Britain's quest for food drove its imperial ambitions. Collingham takes the reader on a powerful journey ranging from the sugary tea of Great Britain to the rum punch of Boston. Like Sidney Mintz or Margaret Visser, Collingham is a historian whose writing about food informs larger stories about human existence: about conflict and culture, about economics and politics. I was dazzled by Collingham's writing and her book also left me very hungry."
—Bee Wilson, author of First Bite

"The Taste of Empire has a hidden history: the menu, and how it changed the world. Lizzie Collingham has uncovered an epic that runs from domestic comedy to horror to the startling shifts that brought rice to America, maize to Africa, and tea to India. She makes it absorbing and utterly readable, mixing the huge economic story with exact and fascinating glimpses into past lives. You'll never see a biscuit tin the same way once you know how they were used in the Zulu Wars."—Michael Pye, author of The Edge of the World