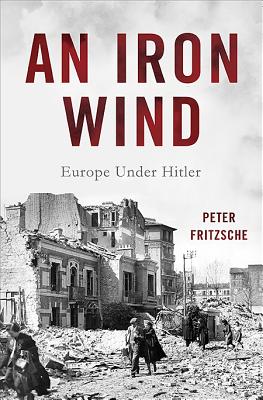 A vivid account of German-occupied Europe during World War II that reveals civilians' struggle to understand the terrifying chaos of war
In An Iron Wind, prize-winning historian Peter Fritzsche draws diaries, letters, and other first-person accounts to show how civilians in occupied Europe tried to make sense of World War II. As the Third Reich targeted Europe's Jews for deportation and death, confusion and mistrust reigned. What were Hitler's aims? Did Germany's rapid early victories mark the start of an enduring new era? Was collaboration or resistance the wisest response to occupation? How far should solidarity and empathy extend? And where was God? People desperately tried to understand the horrors around them, but the stories they told themselves often justified a selfish indifference to their neighbors' fates.
Piecing together the broken words of the war's witnesses and victims, Fritzsche offers a haunting picture of the most violent conflict in modern history.

Praise For An Iron Wind: Europe Under Hitler…

"A profoundly significant exploration of how
Europeans--both Germans and those under German occupation--struggled to make
sense of the conflict."

"Riveting, important...the most bracing and unsparing dissection of the subject to appear in many
years."
—Christian Science Monitor

"Powerfully written....Fritzsche renders a tremendous service in his portrayal of human beings in wartime."
—CHOICE

"A thoroughly worked example of social history
at its most valuable. It could serve as a model for studies of our own times."
—New York Journal of Books

Peter Fritzsche is the W. D. & Sarah E. Trowbridge professor of history at the University of Illinois and the author of several previous books, including An Iron Wind: Europe Under Hitler and the award-winning Life and Death in the Third Reich. He lives in Urbana, Illinois.
Loading...
or
Not Currently Available for Direct Purchase