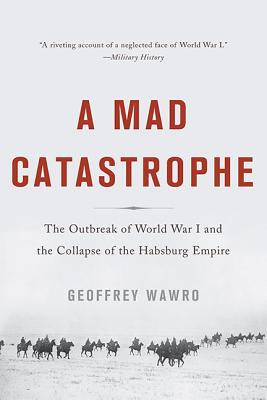 A masterful account of the Hapsburg Empire's bumbling entrance into World War I, and its rapid collapse on the Eastern Front

The Austro-Hungarian army that marched east and south to confront the Russians and Serbs in the opening campaigns of World War I had a glorious past but a pitiful present. Speaking a mystifying array of languages and lugging outdated weapons, the Austrian troops were hopelessly unprepared for the industrialized warfare that would shortly consume Europe.

As prizewinning historian Geoffrey Wawro explains in A Mad Catastrophe, the doomed Austrian conscripts were an unfortunate microcosm of the Austro-Hungarian Empire itself-both equally ripe for destruction. After the assassination of the Austrian Archduke Franz Ferdinand in June 1914, Germany goaded the Empire into a war with Russia and Serbia. With the Germans massing their forces in the west to engage the French and the British, everything-the course of the war and the fate of empires and alliances from Constantinople to London-hinged on the Habsburgs' ability to crush Serbia and keep the Russians at bay. However, Austria-Hungary had been rotting from within for years, hollowed out by repression, cynicism, and corruption at the highest levels. Commanded by a dying emperor, Franz Joseph I, and a querulous celebrity general, Conrad von HÃ¶ndorf, the Austro-Hungarians managed to bungle everything: their ultimatum to the Serbs, their declarations of war, their mobilization, and the pivotal battles in Galicia and Serbia. By the end of 1914, the Habsburg army lay in ruins and the outcome of the war seemed all but decided.

Drawing on deep archival research, Wawro charts the decline of the Empire before the war and reconstructs the great battles in the east and the Balkans in thrilling and tragic detail. A Mad Catastrophe is a riveting account of a neglected face of World War I, revealing how a once-mighty empire collapsed in the trenches of Serbia and the Eastern Front, changing the course of European history.

Praise For A Mad Catastrophe: The Outbreak of World War I and the Collapse of the Habsburg Empire…

"Exceptionally accessible to the general reader, Wawro offers a picture of an Austro-Hungarian leadership that was reckless in the extreme...with a fatalistic sense of 'now or never.'" —Wall Street Journal

"A Mad Catastrophe finally brings some clarity to how the death of one Archduke, while admittedly tragic, could lead to the deaths of millions.... Wawro's excellently written book, in chilling detail, explains all the frustrating and infuriating blundering. The war was completely senseless, the insane war-lust of a failing state; this book gives Austria-Hungary its rightful, starring role as cause of the conflict." —San Francisco Book Review

"Wawro writes about the Austro-Hungarian Empire's role in the start and unfolding of the Great War with verve, inescapable black humour and a certain note of there-but-for-the-grace-of-God."—Macleans

"Wawro is a historian of the US military, but his damning portrait of the neurotic empire...well reflects the surreal fiction of Hasek and Musil."—Literary Review, UK

"A Mad Catastrophe is a welcome contribution to the small but growing number of scholarly studies of the eastern front that have appeared in English over the last few years."—BBC History Magazine

"This study stands out for its devastating portrayal of the reckless diplomacy, internal political disarray and incompetent battlefield leadership that dragged Austro-Hungary towards the abyss in 1914. Wawro...offers a remarkably fresh and unsentimental analysis of an empire on its last legs."—Financial Times Best History Books of 2014

"2014 marks the centennial of the outbreak of World War I, and Geoffrey Wawro's A Mad Catastrophe is a welcome addition to the growing list of books covering the causes and development of the horrific war.... Accompanied by detailed maps, his descriptions are blow-by-blow accounts, all written in lively prose. His is a sad story of carnage and destruction that drives home, yet again, the futility and stupidity of this 'Great War.'"—Providence Journal

"2014 marks the centennial of the outbreak of World War I, and Geoffrey Wawro's A Mad Catastrophe is a welcome addition to the growing list of books covering the causes and development of the horrific war.... Accompanied by detailed maps, his descriptions are blow-by-blow accounts, all written in lively prose. His is a sad story of carnage and destruction that drives home, yet again, the futility and stupidity of this 'Great War.'"—Providence Journal

"An engaging case study in the disaster that can happen when interests and capabilities get greatly out of kilter.... Readable and entertaining."—Army Magazine

"A riveting account of a neglected face of WWI."—Military History

"A Mad Catastrophe is a highly readable and cogently argued book that, once again, shows the level of sheer idiocy that lay behind this pivotal period of history."—History of War, UK

"A fascinating addition to the military and diplomatic scholarship surrounding Austria-Hungary's inept move toward war and its incompetent execution of the conflict.... Wawro's book is an excellent account of where plunging over a cliff will land you: in pieces."—MHQ: The Quarterly Journal of Military History

"Wawro's authoritative account is a damning analysis of an empire and a people unready for war."—Publishers Weekly

"Wawro offers a crucial insight into the Eastern Front.... On this centennial of the Great War's beginning, Wawro has composed a thoroughly researched and well-written account, mercilessly debunking any nostalgia for the old monarch and the deeply dysfunctional empire over which he presided."—Kirkus Reviews

"Wawro's contribution lies in his focus on how the overall decline of Austria-Hungary broke relations with the Balkan states and Russia and how its military blundering caused its ultimate destruction. A worthwhile read."—Library Journal

"The most important study of the Eastern Front in decades, Wawro's brilliant and thoroughly researched narrative easily replaces existing books on the subject. Eschewing the Radetzky March nostalgia which so often suffuses books on the last years of the Dual Monarchy, Wawro summons forth a searing indictment of the lethal Austro-Hungarian blundering which helped unleash the First World War and brought all the horrors of the modern age to Eastern Europe."—Sean McMeekin, author of July 1914: Countdown to War

"A distinctly unique and long overdue contribution to the historiography of early WWI. The aficionados of Barbara Tuchman's Guns of August and Istvan Szabo's film Colonel Redl will find this a marvelous, engrossing and distinctly well written read that gives necessary balance to the already well-covered narrative of WWI's Western Front.... Master historian Geoff Wawro does a tour de force job in colorfully bringing this to light."—Brigadier General Peter Zwack, US Army

"A Mad Catastrophe systematically eviscerates Austria-Hungary's final, fatal efforts to play the role of a great power. Wawro presents a case study of culpable, comprehensive, synergistic incompetence at every level of policy-making, strategic planning, and operational effectiveness. A decaying empire went to war fecklessly, conducted war haphazardly, and pulled Europe down into its final vortex. Brilliantly acerbic and comprehensively researched, this is a book difficult to put down."—Dennis Showalter, author of Patton and Rommel: Men of War in the 20th Century

"A Mad Catastrophe is an absorbing and shocking look at a now neglected aspect of the origins of the First World War. The author--a master military historian, whose works are standard accounts of late nineteenth century Austro-Prussian wars--shows just how reckless Viennese policy before and after the outbreak of hostilities was. Wawro's book should be on every reading list and in the hands of every policymaker."—Brendan Simms, author of Europe: The Struggle for Supremacy from 1453 to the Present

"This is not just a story of the part played by the Hapsburg Empire in precipitating the First World War, and of the truly lamentable performance of its armies once the war began. It is a devastating indictment of a whole regime, whose slovenly incompetence resulted in a military catastrophe of which Geoff Wawro gives a truly horrifying account. Of all the histories of 1914 that are now pouring from the press, this will rank among the very best." —Sir Michael Howard

Geoffrey Wawro is professor of history and director of the Military History Center at the University of North Texas and the author of six books, including A Mad Catastrophe: The Outbreak of World War I and the Collapse of the Habsburg Empire. Wawro lives in Dallas, Texas.
Loading...
or support indie stores by buying on