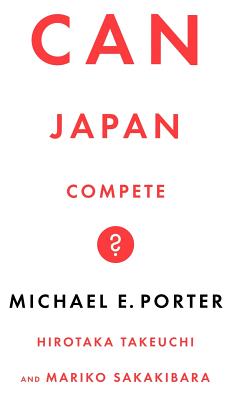 In Can Japan Compete?, world-renowned competition strategist Michael Porter and his colleagues explain why American assumptions about Japan have proved so inaccurate, what Japan must do to regain its strength, and what its journey can tell us about how to succeed in the new global economy. The research behind this book began in the early 1990s, at a time when Japan's economic success was overwhelmingly credited to the Japanese government and its unique management policies. Porter and his colleagues started by asking a crucial but previously overlooked question: If Japanese government policies and practices accounted for the nation's extraordinary competitiveness, then why wasn't Japan competitive in many of the industries where those policies had been prominently implemented? The authors and a team of colleagues surveyed a vast array of Japanese industries. This surprising book is the result of their work. The continuing influence of Japanese government and management strategies worldwide makes Can Japan Compete? a must read for anyone competing in the global economy.

Michael E. Porter is the C. Roland Christensen Professor of Business Administration at the Harvard Business School. He is the author of a number of books on competitive strategy and international competitiveness, including The Competitive Strategy: Techniques for Analyzing Industries and Competitors, which has been printed more than fifty times.
Loading...
or support indie stores by buying on