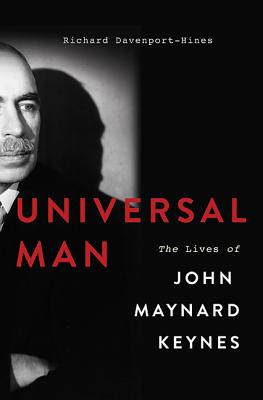 The Lives of John Maynard Keynes

John Maynard Keynes (1883-1946) was the twentieth century's most influential economist. His ideas inspired Franklin D. Roosevelt to launch the New Deal and instructed Western nations on how to ward off revolutionary unrest, economic instability, high unemployment, and social dissolution. Keynes was nothing less than the Adam Smith of his time: his The General Theory of Employment, Interest and Moneybecame as important in the twentieth century as Smith's The Wealth of Nations was in the eighteenth. Now, in the long wake of the 2008 global economic collapse, Keynesian economics is once again shaping our world.

In Universal Man, acclaimed historian Richard Davenport-Hines offers the first biography of Keynes that reveals the man in full. Like many Englishmen of his class and era, Keynes compartmentalized his life. Accordingly, Davenport-Hines treats Keynes in turn as a youthful prodigy, a powerful government official, an influential public man, a bisexual living in the shadow of Oscar Wilde's persecution, a devotee of the arts, and an international statesman of worldwide renown. Delving into Keynes's experiences and thought, Davenport-Hines shows us a man who was equally at ease socializing with the Bloomsbury Group as he was persuading heads of state to adopt his policies. Through Davenport-Hines' nuanced portrait, we come to understand not just the most enduringly influential economist of the modern era, but one of the most gifted and vital men of our times: a disciplined logician with a capacity for glee who persuaded people, seduced them, subverted old ideas, and installed new ones.

Engaging, learned, and sparkling with wit and insight, Universal Man is the perfect match for its brilliant subject.

Praise For Universal Man: The Lives of John Maynard Keynes…

"[A] succinct, lively and well-written biography.... [Reducing the amount written on Keynes] has been done with great elegance and panache by Davenport-Hines, in a volume that will introduce Keynes and his strange world to a new generation of readers."—London Evening Standard

"[Davenport-Hines's] lens is directed not at Keynes the macroeconomist but at Keynes the man himself. Fortunately, the author has a rich and compelling story to tell...non-economists who have never read a Keynes biography and are not looking for lots of technical detail and jargon will find it an absorbing read. Even many economists, like me, are likely to derive some fun and profit from it."—H-Net

"This is an entrancing book, always light but never weightless and I am sure that John Maynard Keynes would have enjoyed it."—The Oldie (UK)

"This book will suit a broad audience wanting to understand Keynes and the period in which he lived."—Library Journal

"An admiring and nuanced book filled with insights into this scholar and man of action in all his complexity."—Kirkus Reviews

"[A] gracefully written biography.... This is a delightful, detailed portrait, rich in interesting anecdote and encompassing the entire roster of Keynes's accomplishments."—Publishers Weekly

"Never has the biography of an economist been so gripping, so witty or, indeed, so racy: Keynes had countless flings with men before, as his biographer puts it, 'he got the knack of heterosexuality' and enjoyed a happy marriage."—Daily Mail

"Richard Davenport-Hines's fine series of sketches of Keynes makes a clear case that he was a great man -- intellectually dazzling and original, generous-spirited, industrious, astonishingly wide-ranging and largely effective.... Davenport-Hines has produced a very readable single volume that succeeds...by providing a professional, temperate and clear account of a gripping subject." —New Statesman (UK)

"[T]his marvelous book is a high achievement: It shows us Keynes as altruist, boy prodigy, official, public man, art connoisseur and envoy. He was a gay man who switched over when he met the Russian dancer Lydia Lopokova, an enjoyer of life who worked himself to death, an economic savior, a truly great man who never imposed a dull moment."—Toronto Star

"This book is organized in an unusual but very effective way.... The result is that the intellectual, social, professional, and personal aspects of Keynes are described and analyzed both independently and as they interrelated to create a complex and brilliant thinker. This is a splendid biography that will fascinate the general reader and give new insight to the scholar. Highly recommended."—Choice

"Davenport-Hines is incapable of writing a dull sentence. His prose sings, his curiosity is omnivorous and he has a piercingly sharp eye for detail.... Has there ever been a more entertaining biography of an economist? I doubt it."—Mail on Sunday (UK)

"[A]n amusing, elegant and provocative writer...great fun. By focusing on Keynes as a private man and public figure rather than an academic economist, it is possible to see him as the last and greatest flowering of Edwardian Liberalism."—Sunday Times (UK)

"[A] first-class book, which I cannot praise highly enough.... Keynes possessed a largeness of mind that one can only call noble and a generosity of spirit that was truly princely. This admirable book does him justice."—Literary Review (UK)

"Quite short, readable and a lot of fun in a rather tawdry sort of way, it is the ideal companion for a weekend break or a short holiday. Certainly it is the best biography now available for noneconomists." —Wall Street Journal

"Richard Davenport-Hines has given us an internationally acclaimed book that will reward its readers both in pleasure and in virtue."—Forbes.com

"A biography of John Maynard Keynes without the economics may seem like Hamlet without the prince. But Richard Davenport-Hines has set out to write such a book, and the result is utterly absorbing.... Davenport-Hines manages to pick out little-known stories, brilliant details and curiosities, relayed with affection.... [An] accomplished biography." —Economist

"For the reader already acquainted with the economics, or indeed not especially interested, there is a lot of fun to be had in this book."—The Times Book of the Week (UK)

"With wit and grace, as well as a good deal of scholarly digging, the author looks at Keynes in seven distinct but overlapping guises.... [I]t is always, in Davenport-Hines's hands, a story told in an incisive and thoughtful way.... The book conveys its own vision of this wholly extraordinary and undeniably idiosyncratic figure with persuasive artistry and conviction"—Financial Times

"As often earthy as he was austere, cruel as he was humane, crude as he was genteel, Keynes the politician and economist yields here to Keynes the man. Richard Davenport-Hines's fascinating character sketch shows that Keynes was all the things that the rest of us are, except ordinary."—Eric Rauchway, author of The Great Depression and the New Deal: A Very Short Introduction

"Richard Davenport Hines's portrait of Keynes is as vivid as fresh paint. You can see the genius of many parts dashing to Number Ten Downing Street or dancing a jig with Lydia. It's wonderful."—Sylvia Nasar, author of A Beautiful Mind

"A book which is worthy of its brilliant subject, Universal Man manages to expound Keynes's ideas while shining with his own optimistic spirit. The fact that this is a book about intellectuals and ideas, does not prevent it from shimmering with low gossip. Richard Davenport-Hines is as deft at describing international political summit meetings as he is at evoking the ballet. Lively, funny, original, and beautifully written."—A. N. Wilson, author of Victoria: A Life

"Treating Keynes's lives as interesting and valuable for their own sake, and not just as a means to his economics, gives them an extra vividness.... With a keen eye for telling detail and social connections, Davenport-Hines brilliantly conveys what one might call the peripheral atmospherics of Keynes's existence."—The Observer

"[A] highly enjoyable series of portraits.... Above all, Davenport-Hines sells his title and his proposition: Keynes is about much more than borrowing and spending, deficits and interest rates and in order to understand his economics one needs to understand the man and his times."—Daily Telegraph (UK)

"[An] engaging and sympathetic biography.... It is extremely difficult to write a biography for the general reader of a man much cleverer than oneself, and to do so admiringly yet critically, but Davenport-Hines brings it off."—The Scotsman (UK)

Richard Davenport-Hines, an award-winning historian, as well as the acclaimed biographer of W. H. Auden and Marcel Proust. An advisor to the Oxford Dictionary of National Biography and a Fellow of the Royal Historical Society and of the Royal Society of Literature, he lives in London.
Loading...
or
Not Currently Available for Direct Purchase