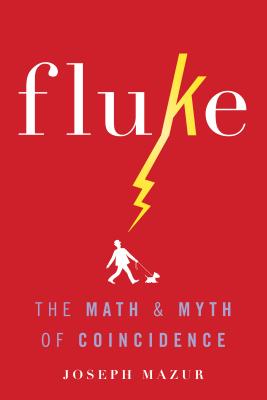 The Math and Myth of Coincidence

A mathematical guide to understanding why life can seem to be one big coincidence-and why the odds of just about everything are better than we would think.

What are the chances? This is the question we ask ourselves when we encounter the strangest and most seemingly impossible coincidences, like the woman who won the lottery four times or the fact that Lincoln's dreams foreshadowed his own assassination. But, when we look at coincidences mathematically, the odds are a lot better than any of us would have thought.

In Fluke, mathematician Joseph Mazur takes a second look at the seemingly improbable, sharing with us an entertaining guide to the most surprising moments in our lives. He takes us on a tour of the mathematical concepts of probability, such as the law of large numbers and the birthday paradox, and combines these concepts with lively anecdotes of flukes from around the world. How do you explain finding your college copy of Moby Dick in a used bookstore on the Seine on your first visit to Paris? How can a jury be convinced beyond a reasonable doubt that DNA found at the scene of a heinous crime did not get there by some fluke? Should we be surprised if strangers named Maria and Francisco, seeking each other in a hotel lobby, accidentally meet the wrong Francisco and the wrong Maria, another pair of strangers also looking for each other? As Mazur reveals, if there is any likelihood that something could happen, no matter how small, it is bound to happen to someone at some time.

In Fluke, Mazur offers us proof of the inevitability of the sublime and the unexpected. He has written a book that will appeal to anyone who has ever wondered how all of the tiny decisions that happen in our lives add up to improbable wholes. A must-read for math enthusiasts and storytellers alike, Fluke helps us to understand the true nature of chance.

Praise For Fluke: The Math and Myth of Coincidence…

"Always entertaining and frequently insightful, Fluke is never less than thought-provoking." --Amir Alexander, Wall Street Journal
"Mazur gently dashes icy water on our sense of wonder, patiently doing the math to explain multiple lottery winners, 'remarkable' accidental scientific discoveries and wrongheaded government policy."--Keith Blanchard, Wall Street Journal
"Mazur takes what could be difficult, abstruse subjects--probability and statistics--and makes them entertaining. The author draws examples and illustrations from a variety of fields--law enforcement, economics, the sciences--and, when he unavoidably gets into some fairly complicated mathematical discussions, he explains his terms and remembers that, for the most part, his readers aren't mathematicians. An ideal book, then, for the lay reader who is curious about the nature of coincidence."--Booklist Online
"Well written, entertaining... an understandable introduction to probability for the layman."--MAA.org
"Mazur's thoughtful tour reveals the explanatory power of probability theory in the larger world."--Publishers Weekly

"By studying anecdotes, probability, the past, the present, and the connectivity of everything, Mazur finds proof of the inevitability of the sublime and inexplicable. If you've ever wondered how the decisions of seven billion people can add up to moments of coincidence, Mazur's careful and clear explanations are for you."-UTNE Reader

"In Fluke, the author takes us on a marvelous guided tour of the world of the unlikely and the improbable. After reading Fluke, you will definitely come away with a deeper understanding of why wildly improbable coincidences may not be so improbable after all."--Ronald Graham, Chief Scientist at the California Institute for Telecommunications and Information Technology
"A tour de force of masterful writing that weaves together simple and not-so-simple mathematical notions of probability and statistics into various intriguing coincidences from fact and fiction, explaining with nuance various strange phenomena. Mazur's book will teach you some of this mathematics, leaving you quite equipped to understand the role of chance in your life without resorting to magical thinking."--Gizem Karaali, Editor, Journal of Humanistic Mathematics
"The chances are very slim that you'd ever read this blurb. A simple-minded calculation puts the odds at about 50,000 to one against. Yet... here you are. How weird is this seemingly far-fetched coincidence? Well, dear reader, you've picked up the right book to answer that question."--Charles Seife, author of Zero: The Biography of a Dangerous Idea

"With charm and clarity, Joe Mazur leads us through the strange terrain of chance and surprise. He explains why apparently remarkable coincidences are usually more likely than we imagine, because we underestimate how large our world really is. Not so much probability theory, as improbability theory! A terrific read, and a welcome antidote to superstition and gullibility."--Ian Stewart, author of Professor Stewart's Incredible Numbers
"Mazur has written a wonderfully insightful book. He shows how it is that our purely psychological expectations about what might happen in the real world, and our culturally acquired notions of order and disorder, often give us a completely false sense of the chance that something will, in fact, occur in the world outside."Richard Lewontin, Professor of Biology Emeritus at Harvard University and author of The Genetic Basis of Evolutionary Change
"Clear, humorous, and grounded in history and culture, Fluke shows you why anything that can happen is bound to happen, sometime. But just as rainbows still thrill us when we parsed the physics, dissecting bizarre coincidences doesn't dilute our amazement. Mazur has accomplished the seemingly impossible feat of writing a book for everyone."--Marjorie Senechal, Editor-in-Chief, The Mathematical Intelligencer

Joseph Mazur is an emeritus professor of mathematics at Marlboro College, and the author of four other popular mathematics books, the most recent of which is the highly acclaimed Enlightening Symbols: A Short History of Mathematical Notation and Its Hidden Powers. Among his many honors is a Guggenheim fellowship. Mazur lives with his wife, Jennifer, in Marlboro, Vermont.
Loading...
or
Not Currently Available for Direct Purchase