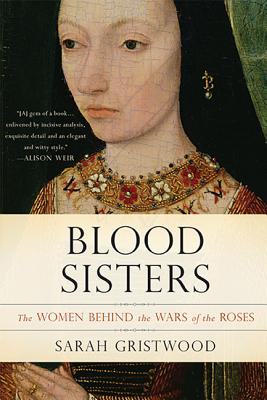 The Women Behind the Wars of the Roses

"[A] gem of a book . . . enlivened by incisive analysis, exquisite detail and an elegant and witty style." -- Alison Weir

The Wars of the Roses, which tore apart the ruling Plantagenet family in fifteenth-century England, was truly a domestic drama, as fraught and intimate as any family feud before or since. But as acclaimed historian Sarah Gristwood reveals, while the events of this turbulent time are usually described in terms of the men who fought and died seeking the throne, a handful of powerful women would prove just as decisive as their kinfolks' clashing armies. A richly drawn, absorbing epic, Blood Sisters reveals how women helped to end the Wars of the Roses, paving the way for the Tudor age -- and the creation of modern England.

Praise For Blood Sisters: The Women Behind the Wars of the Roses…

"Arguing persuasively for the existence of a
'female network,'... Gristwood details the paths of seven royal women who
transcended their roles as diplomatic pawns and heir producers."—The New Yorker

"Gristwood's sensitive approach marks out Blood Sisters as much more than the narrative of an age.... It is an exploration of what it meant to be a medieval queen.... A compelling portrait of this bloody age, complete with the heartbreak and triumphs that went with it."—The Spectator

"A new and welcome
perspective on the Wars of the Roses."—Sunday Times (London)

"A revolutionary
approach. For too long, history has been the purview of men, of
kings and their battles, wars, conquests, murders and thirst for power.... Gristwood's
perspective and lively writing are refreshing."—Toronto Star

Sarah Gristwood is a regular contributor to many London publications as well as a commentator on royal and historical affairs. The author of several previous books, including Blood Sisters, Gristwood splits her time between London and Kent, United Kingdom.
Loading...
or
Not Currently Available for Direct Purchase