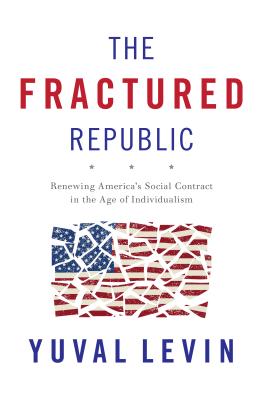 Renewing America's Social Contract in the Age of Individualism

Americans today are frustrated and anxious. Our economy is sluggish, and leaves workers insecure. Income inequality, cultural divisions, and political polarization increasingly pull us apart. Our governing institutions often seem paralyzed. And our politics has failed to rise to these challenges.

No wonder, then, that Americans -- and the politicians who represent them -- are overwhelmingly nostalgic for a better time. The Left looks back to the middle of the twentieth century, when unions were strong, large public programs promised to solve pressing social problems, and the movements for racial integration and sexual equality were advancing. The Right looks back to the Reagan Era, when deregulation and lower taxes spurred the economy, cultural traditionalism seemed resurgent, and America was confident and optimistic. Each side thinks returning to its golden age could solve America's problems.

In The Fractured Republic, Yuval Levin argues that this politics of nostalgia is failing twenty-first-century Americans. Both parties are blind to how America has changed over the past half century -- as the large, consolidated institutions that once dominated our economy, politics, and culture have fragmented and become smaller, more diverse, and personalized. Individualism, dynamism, and liberalization have come at the cost of dwindling solidarity, cohesion, and social order. This has left us with more choices in every realm of life but less security, stability, and national unity.

Both our strengths and our weaknesses are therefore consequences of these changes. And the dysfunctions of our fragmented national life will need to be answered by the strengths of our decentralized, diverse, dynamic nation.
Levin argues that this calls for a modernizing politics that avoids both radical individualism and a centralizing statism and instead revives the middle layers of society -- families and communities, schools and churches, charities and associations, local governments and markets. Through them, we can achieve not a single solution to the problems of our age, but multiple and tailored answers fitted to the daunting range of challenges we face and suited to enable an American revival.

Praise For The Fractured Republic: Renewing America's Social Contract in the Age of Individualism…

Wall Street Journal:
"Compelling.... Yuval Levin has written an incisive and irenic critique of contemporary American society, together with a series of reflections that offer a way forward without trafficking in the false hope of 'solutions.' That he has done so in fewer than 250 pages of clear, well-organized prose ought to make the book famous for a generation. Maybe, in time, we can stop asking why the former days were better than these."—-

Senator Mike Lee, Wall Street Journal:
"Amid the confusion and clamor, Yuval Levin's The Fractured Republic stands out as a penetrating diagnosis of the emerging fault lines in American society."
—-

Commentary:
Superb.... The Fractured Republic is not a manual or blueprint for reform, and it does not offer a checklist of repairs to make America whole again. Instead, it merges a deep philosophic understanding of the American experiment and a conceptual analysis of American history into a practical basis from which we can examine contemporary American problems with crystalline clarity. Levin calls his book an 'essay,' and it provides the bracing shock of illumination that is the hallmark of all great essays."—-

Weekly Standard:
"[This book] couldn't have come out at a better time. The Fractured Republic is half diagnosis and half prescription. And both halves are essential reading, especially as we contemplate what the current election means for our body politic."—-

Commentary:
"In a bleak political year, there comes a shaft of light in the form of an extraordinary new book, The Fractured Republic.... [Levin] is among America's most important and humane conservative thinkers. Yuval Levin's brilliant new book offers social conservatives a more effective approach to social engagement not only because it's more positive but because it's more true, because it appeals to people on a deeper level, because offering people a healing grace and hope is what is likely to be especially attractive and powerful in this time of disorientation, distemper, and confusion."—-

David Brooks, New York Times
"There are just a few essential reads if you want to understand the American social and political landscape today.... Today, I'd add Yuval Levin's fantastic new book, The Fractured Republic...I learned something new on every page."—-

Michael Gerson, Washington Post:
Instead of desperately trying to go back in time to recover lost unity, Levin urges citizens to look forward as well as downward, to improve the cultural patch around them. This future orientation may seem like an odd message for a conservative, and it is all the more powerful for coming from one. The goal is not to make America great... again. It is to make America great in a distinctly 21st-century way."—-

New Criterion
“Insightful… This is the great value of Mr. Levin's book: it cuts through the confusion of the present moment, explains how we got to where we are, and suggests some possible avenues out of the impasse… Yuval Levin deserves great credit for opening up the discussion with this most illuminating essay.”—-

Peggy Noonan, columnist, The Wall Street Journal
“Yuval Levin's thinking is serious, substantive, and deeply informed, yet his tone is always heartening and serene. His style itself is an element of his thought. The Fractured Republic helps us think clearly about this moment in the life of our country that almost refuses to be clearly understood. He finds solutions in the best of the American tradition. Our weaknesses, he says, are only the opposite side of our strengths. Anyone looking for a realistic source of hope will find it here.”
—-

Representative Paul Ryan, Speaker of the US House of Representatives
“Yuval Levin is one of the most insightful and original thinkers of our time. In this book, he shows why conservatives are best-equipped to help Americans navigate this new and fragmented world we're in. This is required reading for anyone interested in saving the American Idea.”—-

National Review
“A rich, nuanced history of the last 70 years.... The Fractured Republic is an invaluable resource for understanding how America came to its present predicament and what must be done to rescue it.”—-

Yuval Levin is director of social, cultural, and constitutional studies at the American Enterprise Institute and the editor of National Affairs. A former member of the White House domestic policy staff under George W. Bush, he has written for the New York Times, Washington Post, and Wall Street Journal, among many other publications. His previous books include The Fractured Republic and The Great Debate. He lives in Maryland.