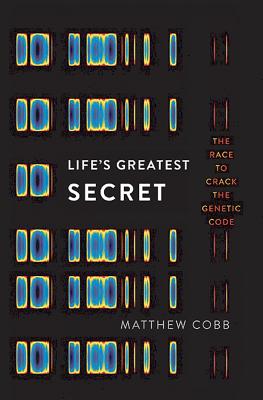 The Race to Crack the Genetic Code

Everyone has heard of the story of DNA as the story of Watson and Crick and Rosalind Franklin, but knowing the structure of DNA was only a part of a greater struggle to understand life's secrets. Life's Greatest Secret is the story of the discovery and cracking of the genetic code, the thing that ultimately enables a spiraling molecule to give rise to the life that exists all around us. This great scientific breakthrough has had farreaching consequences for how we understand ourselves and our place in the natural world, and for how we might take control of our (and life's) future.

Life's Greatest Secret mixes remarkable insights, theoretical dead-ends, and ingenious experiments with the swift pace of a thriller. From New York to Paris, Cambridge, Massachusetts, to Cambridge, England, and London to Moscow, the greatest discovery of twentieth-century biology was truly a global feat. Biologist and historian of science Matthew Cobb gives the full and rich account of the cooperation and competition between the eccentric characters -- mathematicians, physicists, information theorists, and biologists -- who contributed to this revolutionary new science. And, while every new discovery was a leap forward for science, Cobb shows how every new answer inevitably led to new questions that were at least as difficult to answer: just ask anyone who had hoped that the successful completion of the Human Genome Project was going to truly yield the book of life, or that a better understanding of epigenetics or "junk DNA" was going to be the final piece of the puzzle. But the setbacks and unexpected discoveries are what make the science exciting, and it is Matthew Cobb's telling that makes them worth reading. This is a riveting story of humans exploring what it is that makes us human and how the world works, and it is essential reading for anyone who'd like to explore those questions for themselves.

Praise For Life's Greatest Secret: The Race to Crack the Genetic Code…

"[T]he cracking of the code of life is a great story, of which this is an accomplished telling."—Economist

"Readers of Mr. Cobb's book will learn much about the history and current state of modern biology."—Wall Street Journal

"A lucid explanation of the science and the stories of key players."—Nature

"An authoritative but nevertheless thrilling narrative.... In short, this is a first-class read."—Observer

"[A] masterly account.... Cobb's book is a delight. Even those who know parts of the story quite well will find fresh, intriguing vignettes."—Guardian

"Cobb covers well-plowed ground, but he does so in a manner both thoroughly engaging and truly edifying."—Publishers Weekly

"Like Cobb's other titles, this scholarly work reflects extensive research and draws upon primary documents. Upper-level students and researchers in biology or the history of science are best equipped to appreciate this detailed book."—Library Journal

"[A] fine history of genetics.... [A] gripping, insightful history, often from the mouths of the participants themselves."—Kirkus Reviews (starred)

"Most people think the race to sequence the human genome culminated at the 2000 White House 'Mission Accomplished' announcement. In Matthew Cobb's Life's Greatest Secret, we learn that it was just one chapter of a far more interesting and continuing story."—Eric Topol, professor of genomics and director, Scripps Translational Science Institute, and author of The Patient Will See You Now

"The third of the grand unifying theories of biology was completed in the 20th Century, following Darwin's evolution by natural selection, and Cell Theory a century earlier. DNA, the double helix, and the universality of the genetic code radically transformed our understanding of life: no area in biology has been untouched by this revolution, from cancer to human origins to genetic engineering, and now, to the future of data storage. Cobb, a scientist and thorough historian, is a master storyteller, and recounts the thrilling science, politics, egos of this grand scientific revolution. Essential, definitive reading."—Adam Rutherford, author of Creation: How Science Is Reinventing Life Itself

"Life's Greatest Secret is the logical sequel to Jim Watson's The Double Helix. While Watson and Crick deserve their plaudits for discovering the structure of DNA, that was only part of the story. Beginning to understand how that helix works--how its DNA code is turned into bodies and behaviors--took another 15 years of amazing work by an army of dedicated men and women. These are the unknown heroes of modern genetics, and their tale is the subject of Cobb's fascinating book. Every now and again I had to stop reading because the amazement overload was too great."—Jerry Coyne, professor of ecology and evolution, the University of Chicago, and author of Why Evolution Is True

"Matthew Cobb is a respected scientist and historian, and he has combined both disciplines to spectacular effect in this wonderful book. A compelling, authoritative, and insightful account of how life works at the deepest level. Bloody brilliant!"—Brian Cox, professor of physics, the University of Manchester and author of Why Does E=mc²?

Matthew Cobb is a professor in the School of Biological Sciences at the University of Manchester, where he studies olfaction, insect behavior, and the history of science. He earned his PhD in psychology and genetics from the University of Sheffield. He is the author of five books: Life's Greatest Secret, Generation, The Resistance, Eleven Days in August, and Smell: A Very Short Introduction. He lives in England.
Loading...
or
Not Currently Available for Direct Purchase