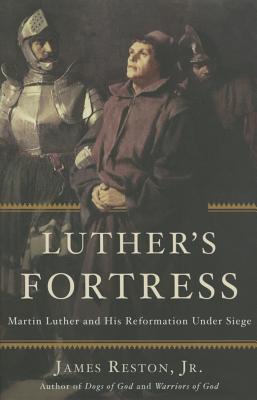 Martin Luther and His Reformation Under Siege

In 1521, the Catholic Church declared war on Martin Luther. The German monk had already been excommunicated the year before, after nailing his Ninety-Five Theses -- which accused the Church of rampant corruption -- to the door of a Saxon church. Now, the Holy Roman Emperor Charles V called for Luther "to be apprehended and punished as a notorious heretic." The edict was akin to a death sentence: If Luther was caught, he would almost inevitably be burned at the stake, his fragile movement crushed, and the nascent Protestant Reformation strangled in its cradle.

In Luther's Fortress, acclaimed historian James Reston, Jr. describes this crucial but little-known episode in Luther's life and reveals its pivotal role in Christian history. Realizing the danger to their leader, Luther's followers spirited him away to Wartburg Castle, deep in central Germany. There he hid for the next ten months, as his fate -- and that of the Reformation -- hung in the balance. Yet instead of cowering in fear, Luther spent his time at Wartburg strengthening his movement and refining his theology in ways that would guarantee the survival of Protestantism. He devoted himself to biblical study and spiritual contemplation; he fought both his papist critics and his own inner demons (and, legend has it, the devil himself); and he held together his fractious and increasingly radicalized reform movement from afar. During this time Luther also crystallized some of his most significant ideas about Christianity and translated the New Testament into German -- an accomplishment that, perhaps more than any other, solidified his legacy and spread his bold new religious philosophy across Europe.

Drawing on Luther's correspondence, notes, and other writings, Luther's Fortress presents an earthy, gripping portrait of the Reformation's architect at this transformational moment, revealing him at his most productive, courageous, and profound.

Praise For Luther's Fortress: Martin Luther and His Reformation Under Siege…

“[A] crisply written narrative.... The author details in exemplary fashion what was so important and influential about his subject's life and works.... A fine, scholarly but accessible treatment of a key period in the life of one of the most influential persons in the history of Christianity.”
—Library Journal

“[A] cogent history.... Reston's superb juxtaposition of Luther's solitude in Wartburg and the instability in both Rome and Wittenberg demonstrates how truly perilous a moment this was in the history of the burgeoning Reformation.”
—Publishers Weekly

“An engaging study of a short but explosive period in the life of the great reformer and translator of the Bible.... In a swift-moving narrative, Reston examines all of the aspects of this tumultuous time for the reformer. An intensive journey inside Luther's thinking as it was forming in opposition to the church.”
—Kirkus Reviews
—-

James Reston, Jr. is the author of sixteen books, including the international bestseller Warriors of God. A senior scholar at the Woodrow Wilson International Center for Scholars, he lives in Chevy Chase, Maryland.
Loading...
or
Not Currently Available for Direct Purchase