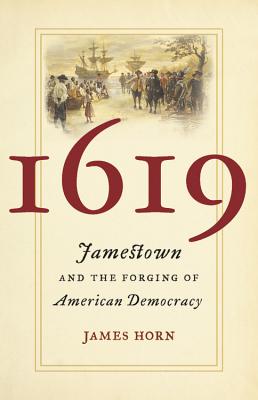 Jamestown and the Forging of American Democracy

The essential history of the extraordinary year in which American democracy and American slavery emerged hand in hand in colonial Virginia.

Along the banks of the James River, Virginia, during an oppressively hot spell in the middle of summer 1619, two events occurred within a few weeks of each other that would profoundly shape the course of history. In the newly built church at Jamestown, the General Assembly -- the first gathering of a representative governing body in America -- came together. A few weeks later, a battered privateer entered the Chesapeake Bay carrying the first African slaves to land on mainland English America.

In 1619, historian James Horn sheds new light on the year that gave birth to the great paradox of our nation: slavery in the midst of freedom. This portentous year marked both the origin of the most important political development in American history, the rise of democracy, and the emergence of what would in time become one of the nation's greatest challenges: the corrosive legacy of racial inequality that has afflicted America since its beginning.

Praise For 1619: Jamestown and the Forging of American Democracy…

"Horn's elegant story-telling and plain prose, supported by a wealth of scholarship and knowledge of the founding of Virginia, provide an easily read journey in time as we are introduced to the details of Virginia's early decades."—Roanoke Times

"Readers may question whether the 1619 election deeply influenced our institutions, but it was the first, and Horn has expertly illuminated a little-known era following Jamestown's settlement."—Kirkus

"Horn's observations allow for a better understanding of the colonists' conflicting views toward Native peoples in this well-documented work for readers of history, especially the precolonial era."—Library Journal

"Horn's detailed analysis of events reveals how these twin events foreshadowed what would culminate in America's birth as a nation."—Booklist

"This well-told account is strongest in its exploration of the conflicts among various English factions: in the 17th century, the utopian ideals of the earliest colonists clashed with and succumbed to mercantilist designs of private property, government by an elite planter class, conquest, and slavery."—Publishers Weekly

"Freedom and slavery in America were born at the same time and the same place, two hundred years ago in Virginia. Master historian James Horn tells these two inextricably linked stories in his powerful new book, 1619: Jamestown and the Forging of American Democracy. Inspired by a vision of establishing a just commonwealth, the Virginia Company authorized the first meeting of an elected legislature in English America in late July or early August; a few weeks later an English privateer sold approximately 20 enslaved Africans to Virginia planters. If at the first the coincidence seemed unremarkable to colonists, its consequences soon proved fateful for Virginia-and ultimately for America. If the tragic legacies of racial slavery are still with us, so too is the possibility of progress in an enlightened, self-governing commonwealth."—Peter S. Onuf, University of Virginia

"No one today knows more about early Virginia than James Horn. In evocative and clear-headed prose, he dissects the core events of its turbulent founding to reveal how the rule of law and self-government took hold the same year that the arrival of Africans in Jamestown announced English Americans' horrific original sin. 1619, built from Horn's unparalleled mastery of a vast body of evidence, is the most thoughtful book we have on this formative moment in our nation's history."—Peter C. Mancall, author of Fatal Journey: The Final Expedition of Henry Hudsons

"Mix English political theory, several hundred settlers trying to better themselves, and a shipload of slaves; add four centuries, and you have America. James Horn explains why Jamestown is our national starting point."—Richard Brookhiser, author of John Marshall: The Man Who Made the Supreme Court

James Horn is the president of the Jamestown Rediscovery Foundation. He is author and editor of five books on colonial American history, including A Land As God Made It: Jamestown and the Birth of America and A Kingdom Strange: The Brief and Tragic History of the Lost Colony of Roanoke. He lives in Richmond, Virginia.
Loading...
or support indie stores by buying on