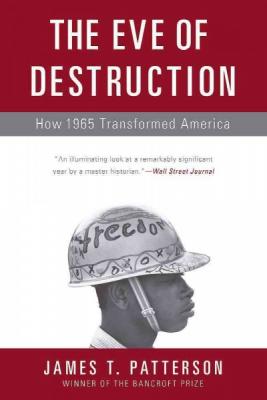 The Eve of Destruction

At the beginning of 1965, the U.S. seemed on the cusp of a golden age. Although Americans had been shocked by the assassination in 1963 of President Kennedy, they exuded a sense of consensus and optimism that showed no signs of abating. Indeed, political liberalism and interracial civil rights activism made it appear as if 1965 would find America more progressive and unified than it had ever been before. In January 1965, President Lyndon Johnson proclaimed that the country had "no irreconcilable conflicts."

Johnson, who was an extraordinarily skillful manager of Congress, succeeded in securing an avalanche of Great Society legislation in 1965, including Medicare, immigration reform, and a powerful Voting Rights Act. But as esteemed historian James T. Patterson reveals in The Eve of Destruction, that sense of harmony dissipated over the course of the year. As Patterson shows, 1965 marked the birth of the tumultuous era we now know as "The Sixties," when American society and culture underwent a major transformation. Turmoil erupted in the American South early in the year, when police attacked civil rights demonstrators in Selma, Alabama. Many black leaders, outraged, began to lose faith in nonviolent and interracial strategies of protest. Meanwhile, the U.S. rushed into a deadly war in Vietnam, inciting rebelliousness at home. On August 11th, five days after Johnson signed the Voting Rights Act, racial violence exploded in the Watts area of Los Angeles. The six days of looting and arson that followed shocked many Americans and cooled their enthusiasm for the president's remaining initiatives. As the national mood darkened, the country became deeply divided. By the end of 1965, a conservative resurgence was beginning to redefine the political scene even as developments in popular music were enlivening the Left.

In The Eve of Destruction, Patterson traces the events of this transformative year, showing how they dramatically reshaped the nation and reset the course of American life.

James T. Patterson is Ford Foundation Professor of History Emeritus at Brown University. Author of Restless Giant: The United States from Watergate to Bush v. Gore, Brown v. Board of Education, and the Bancroft Prize-winning Grand Expectations: The United States, 1945-1974.
Loading...
or
Not Currently Available for Direct Purchase