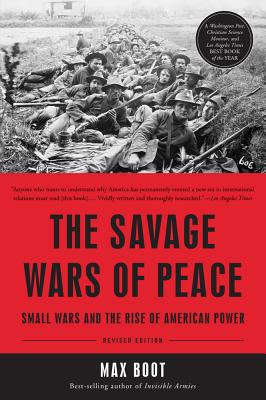 The Savage Wars of Peace (Paperback)

Small Wars and the Rise of American Power

"Anyone who wants to understand why America has permanently entered a new era in international relations must read [this book] . . . Vividly written and thoroughly researched." -- Los Angeles Times

America's "small wars," "imperial war," or, as the Pentagon now terms them, "low-intensity conflicts," have played an essential but little-appreciated role in its growth as a world power. Beginning with Jefferson's expedition against the Barbary pirates, Max Boot tells the exciting stories of our sometimes minor but often bloody landings in Samoa, the Philippines, China, Haiti, the Dominican Republic, Nicaragua, Mexico, Russia, and elsewhere. Along the way he sketches colorful portraits of little-known military heroes such as Stephen Decatur, "Fighting Fred" Funston, and Smedly Butler.
This revised and updated edition of Boot's compellingly readable history of the forgotten wars that helped promote America's rise in the lst two centuries includes a wealth of new material, including a chapter on the wars in Iraq and Afghanistan, and a new afterword on the lessons of the post-9/11 world.

Max Boot is the Jeane J. Kirkpatrick Senior Fellow in National Security Studies at the Council on Foreign Relations. A contributing editor to The Weekly Standard and the Los Angeles Times, Boot lives in the New York area.

Praise For The Savage Wars of Peace: Small Wars and the Rise of American Power…

"A fascinating set of case studies worth reading for the stories alone."—The Washington Post Book World

"This book is not only an eminently readable and entertaining narrative history of America's small wars, but also is a serious analysis of current strategic challenges.... Boot is an exceptional writer and his engaging style is tailor-made for this type of narrative."—National Review

"An outstanding addition to this body of literature."—The Washington Times

"In its high-spirited early chapters, Max Boot's The Savage Wars of Peace recalls Patrick O'Brian's Aubrey and Maturin saga.... In his concluding comments, Boot sets out a thoughtful list of lessons that should have been learned."
—New York Review of Books

"[Boot] tells the story with clarity and verve, rediscovering on the way some lesser-known American heroes.... Clear narrative plus such tales of daring-do are enough on their own to make this book enjoyable. But Mr. Boot is also trying to make a point about the present.... Enjoyable.... Informative."—
The Economist

"A book that has become--very much like [Paul] Kennedy's, [Francis] Fukuyama's and [Samuel] Huntington's--'must' reading in Congress, the Pentagon and among Washington's columnists and think-tankers."
—
Business Times

"By collecting the best exploits from some of the most significant small wars between two covers, [Boot has] done a real public and strategic service."
—Slate

"Boot's well-written narrative is not only fascinating reading, but didactic as well.... The events of September 11 give The Savage Wars of Peace an uncanny timeliness and sadly confirm almost all of Boot's dispassionate warnings."—The Weekly Standard

"Max Boot's The Savage Wars of Peace makes it possible to revisit that past 'imperial' tradition and mine it for lessons that might improve the management of today's global order...by reviewing the nation's past, he shows its future.... Thanks to Boot's journalistic sense--he is editorial features editor at the Wall Street Journal--those lessons make for a great story and a compelling read. Boot combines a wide-angle perspective with an eye for detail."
—Foreign Affairs
or
Not Currently Available for Direct Purchase
Copyright © 2020 American Booksellers Association