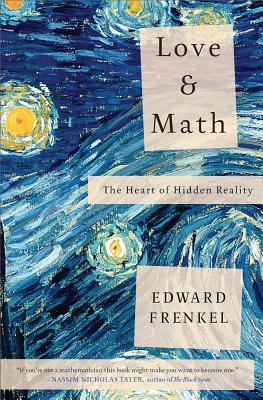 The Heart of Hidden Reality

An awesome, globe-spanning, and New York Times bestselling journey through the beauty and power of mathematics

What if you had to take an art class in which you were only taught how to paint a fence? What if you were never shown the paintings of van Gogh and Picasso, weren't even told they existed? Alas, this is how math is taught, and so for most of us it becomes the intellectual equivalent of watching paint dry.

In Love and Math, renowned mathematician Edward Frenkel reveals a side of math we've never seen, suffused with all the beauty and elegance of a work of art. In this heartfelt and passionate book, Frenkel shows that mathematics, far from occupying a specialist niche, goes to the heart of all matter, uniting us across cultures, time, and space.

Love and Math tells two intertwined stories: of the wonders of mathematics and of one young man's journey learning and living it. Having braved a discriminatory educational system to become one of the twenty-first century's leading mathematicians, Frenkel now works on one of the biggest ideas to come out of math in the last 50 years: the Langlands Program. Considered by many to be a Grand Unified Theory of mathematics, the Langlands Program enables researchers to translate findings from one field to another so that they can solve problems, such as Fermat's last theorem, that had seemed intractable before.

At its core, Love and Math is a story about accessing a new way of thinking, which can enrich our lives and empower us to better understand the world and our place in it. It is an invitation to discover the magic hidden universe of mathematics.

Praise For Love and Math: The Heart of Hidden Reality…

"Love and Math is a book by a very brilliant Russian-born mathematician, Edward Frenkel, who tells his life story while he's telling you some of the fundamentals of mathematics in language that interested laypeople can understand."—Moshe Safdie, New York Times, Sunday Review

"[Frenkel's] winsome new memoir... is three things: a Platonic love letter to mathematics; an attempt to give the layman some idea of its most magnificent drama-in-progress; and an autobiographical account, by turns inspiring and droll, of how the author himself came to be a leading player in that drama." —New York Review of Books

"With every page, I found my mind's eye conjuring up a fictional image of the book's author, writing by candlelight in the depths of the Siberian winter like Omar Sharif's Doctor Zhivago in the David Lean movie adaptation of Pasternak's famous novel. Love and Math is Edward Frenkel's Lara poems... As is true for all the great Russian novels, you will find in Frenkel's tale that one person's individual story of love and overcoming adversity provides both a penetrating lens on society and a revealing mirror into the human mind." —Keith Devlin, Huffington Post

"Love and Math = fast-paced adventure story + intimate memoir + insider's account of the quest to decode a Rosetta Stone at the heart of modern math. It all adds up to a thrilling intellectual ride--and a tale of surprising passion."—Steven Strogatz, Schurman Professor of Applied Mathematics, Cornell University, and author of The Joy of x

"Through his fascinating autobiography, mathematician Edward Frenkel is opening for us a window into the ambitious Langlands Program--a sweeping network that interconnects many branches of mathematics and physics. A breathtaking view of modern mathematics."—Mario Livio, astrophysicist, and author of The Golden Ratio and Brilliant Blunders

"This very readable, passionately written, account of some of the most exciting ideas in modern mathematics is highly recommended to all who are curious lovers of beauty."—David Gross, Nobel Laureate in Physics

"I don't know if I've ever used the words love and math together, but this book changed that. In the tradition of his heroes Andre Weil and C. N. Yang, Edward Frenkel writes of the objective beauty of numbers. Like musical notes, they exist apart from the mind, daring us to fathom their depths and assemble them in arcane narratives that tell the story of us. Reading this book, one is compelled to drop everything and give math another try; to partake of the ultimate mystery."—Chris Carter, creator of The X-Files

"Two fascinating narratives are interwoven in Love and Math, one mathematical, the other personal... Frenkel deftly takes the reader ... to the far reaches of our current understanding. He seeks to lay bare the beauty of mathematics for everyone. As he writes, 'There is nothing in this world that is so deep and exquisite and yet so readily available to all.'"—Nature

"Reasoning that some of us are unwilling to engage with maths because we cannot see it, Professor Frenkel relates it tirelessly to things we can. A colourful paean to numbers."—The Guardian (UK)

"Fascinating... By using analogies, [Frenkel] describes concepts such as symmetries, dimensions, and Riemann surfaces in a way that will enable nonmathematicians to understand them. Whether or not readers develop a love for math, they will get a glimpse of the love that Frenkel has for the subject. Recommended for all readers, math whizzes or not, inclined to be interested in the subject."—Library Journal

"Frenkel reveals the joy of pure intellectual discovery in this autobiographical story of determination, passion, and the Langlands program... Frenkel's gusto will draw readers into his own quest, pursuing the deepest realities of mathematics as if it were 'a giant jigsaw puzzle, in which no one knows what the final image is going to look like.'"—Publishers Weekly

"A fascinating peek into the author's life and work."—Kirkus Reviews

"Frenkel pares the technical details to a minimum as he reflects on the platonic transcendence of mathematical concepts and marvels at their mysterious utility in explaining physical phenomena. Not merely dry formulas in textbooks, the math Frenkel celebrates fosters freedom and, yes, even distills the essence of love. A breathtaking personal and intellectual odyssey."—Booklist

"Part ode, part autobiography, Love and Math is an admirable attempt to lay bare the beauty of numbers for all to see."—Scientific American

Edward Frenkel is a professor of mathematics at the University of California, Berkeley, and was previously on the faculty at Harvard University. The winner of the Hermann Weyl Prize in mathematical physics, he has contributed articles to the Wall Street Journal, the New York Daily News, Slate, and the Scientific American blog.
Loading...
or support indie stores by buying on