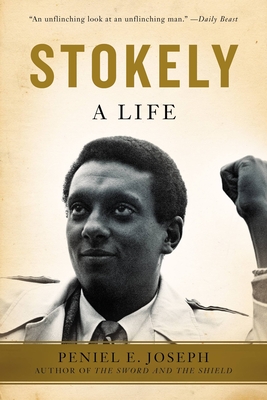 From the author of The Sword and the Shield, this definitive biography of the Black Power activist Stokely Carmichael offers "an unflinching look at an unflinching man" (Daily Beast).

Stokely Carmichael, the charismatic and controversial Black activist, stepped onto the pages of history when he called for "Black Power" during a speech one Mississippi night in 1966. A firebrand who straddled both the American civil rights and Black Power movements, Carmichael would stand for the rest of his life at the center of the storm he had unleashed. In Stokely, preeminent civil rights scholar Peniel E. Joseph presents a groundbreaking biography of Carmichael, using his life as a prism through which to view the transformative African American freedom struggles of the twentieth century.

A nuanced and authoritative portrait, Stokely captures the life of the man whose uncompromising vision defined political radicalism and provoked a national reckoning on race and democracy.

Praise For Stokely: A Life…

“Joseph's account of Carmichael's life is well-written and well-researched, providing persuasive explanations for his appeal.... Joseph's biography fills a huge void and is a welcome addition to the scholarly literature on the civil rights movement.”—Washington Post

“This is at its heart a book of ideas — ideas about power, freedom, and identity — and of a life, the author writes, that ‘took shape against the backdrop of a domestic war for America's very soul.’”—Boston Globe

“Mr. Joseph’s detail rich biography delves into the life of a political activist turned icon while not forgetting to show us his human side.”—Pittsburgh Post-Gazette

“Peniel E. Joseph’s newly published biography of Black liberation activist Stokely Carmichael not only takes its rightful place next to Taylor Branch’s epic trilogy The King Years, but also to one of the most powerful autobiographies by any American: Stokely Carmichael’s own Ready For Revolution.... Stokely: A Life is a quality read. By highlighting the life of one of the US civil rights/black liberation most important organizers and thinkers, Peniel E. Joseph has done a great service to history and to the people Stokely fought for. Furthermore, Peniel’s text has lifted Carmichael out of an obscurity he not only didn't deserve, but which also prevented a more complete understanding of a man who, with Malcom X and Martin Luther King, Jr., deserves to be recognized as one of the great leaders of one of the greatest grassroots movements for liberation in history: the Black freedom struggle in the United States.”—Counter-Punch

“Meticulously-researched and painstakingly-detailed, Stokely: A Life is a fast-flowing, informative read which intimately follows its subject from the cradle to the grave in absorbing fashion. In the process, this powerful portrait effectively re-positions him as an uncompromising prophet who played a pivotal role in the struggle for black equality.”—Afro-American

“A thorough and engaging account of one of the most important figures of the civil rights movement. Stokely achieves its primary goal of restoring Carmichael to his rightful place in the pantheon of influential Americans.... Offers delicious details, thoughtful analysis and a good amount of drama concerning this enigmatic figure.... Joseph’s landmark book is the best portrait yet of this important, complicated man and the America he so wanted to love but could not.”—Post & Courier

“A thought-provoking biography.... A brilliant bio with plenty of brio.”—Amsterdam News

Peniel E. Joseph is the Barbara Jordan Chair in Ethics and Political Values, Founding Director of the Center for the Study of Race and Democracy, and Associate Dean for Justice, Equity, Diversity, and Inclusion at the LBJ School of Public Affairs and Professor of History at the University of Texas at Austin. He is the author of award-winning books on African American history, including The Sword and the Shield and The Third Reconstruction. He lives in Austin, Texas.
Loading...
or
Not Currently Available for Direct Purchase