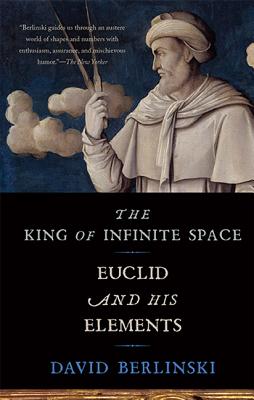 The King of Infinite Space

Euclid and His Elements

Geometry defines the world around us, helping us make sense of everything from architecture to military science to fashion. And for over two thousand years, geometry has been equated with Euclid's Elements, arguably the most influential book in the history of mathematics In The King of Infinite Space, renowned mathematics writer David Berlinski provides a concise homage to this elusive mathematician and his staggering achievements. Berlinski shows that, for centuries, scientists and thinkers from Copernicus to Newton to Einstein have relied on Euclid's axiomatic system, a method of proof still taught in classrooms around the world. Euclid's use of elemental logic -- and the mathematical statements he and others built from it -- have dramatically expanded the frontiers of human knowledge.

The King of Infinite Space presents a rich, accessible treatment of Euclid and his beautifully simple geometric system, which continues to shape the way we see the world.

David Berlinski holds a Ph.D. from Princeton University and has taught mathematics and philosophy at universities in the United States and France. The bestselling author of A Tour of the Calculus and Newton's Gift, as well as many other books, he lives in Paris.
Loading...
or
Not Currently Available for Direct Purchase