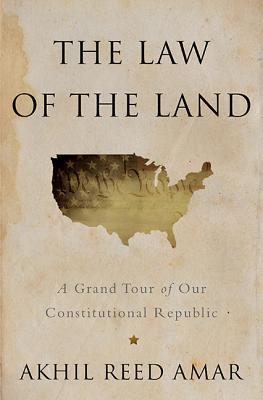 The Law of the Land (Hardcover)

A Grand Tour of Our Constitutional Republic

From Kennebunkport to Kauai, from the Rio Grande to the Northern Rockies, ours is a vast republic. While we may be united under one Constitution, separate and distinct states remain, each with its own constitution and culture. Geographic idiosyncrasies add more than just local character. Regional understandings of law and justice have shaped and reshaped our nation throughout history. America's Constitution, our founding and unifying document, looks slightly different in California than it does in Kansas.

In The Law of the Land, renowned legal scholar Akhil Reed Amar illustrates how geography, federalism, and regionalism have influenced some of the biggest questions in American constitutional law. Writing about Illinois, "the land of Lincoln," Amar shows how our sixteenth president's ideas about secession were influenced by his Midwestern upbringing and outlook. All of today's Supreme Court justices, Amar notes, learned their law in the Northeast, and New Yorkers of various sorts dominate the judiciary as never before. The curious Bush v. Gore decision, Amar insists, must be assessed with careful attention to Florida law and the Florida Constitution. The second amendment appears in a particularly interesting light, he argues, when viewed from the perspective of Rocky Mountain cowboys and cowgirls.

Propelled by Amar's distinctively smart, lucid, and engaging prose, these essays allow general readers to see the historical roots of, and contemporary solutions to, many important constitutional questions. The Law of the Land illuminates our nation's history and politics, and shows how America's various local parts fit together to form a grand federal framework.

Praise For The Law of the Land: A Grand Tour of Our Constitutional Republic…

"In the era of blue states and red states, it is a challenge to develop new theories about the governance of our country. In The Law of the Land, Yale Law School professor Akhil Reed Amar has done just that by examining a range of issues involving the Constitution and the Supreme Court through the lens of geographical differences.... Amar is one of the leading constitutional scholars in the country and an extremely creative thinker. The book is at its best when he explores some of his own elegant constitutionalism to explain the work of justices or insights about the Constitution."—Washington Post

"[Amar's] latest effort, The Law of the Land, reflects both his devotion and his creativity. The essays here are civics lessons, artfully blending the conventional with the controversial. The prose is graceful and livened by an easy sense of humor.... We can all learn from following him on his travels across the continent."—
Wall Street Journal

"[The Law of the Land] is profound in its insights about the United States Constitution.... The book is filled with fascinating and important discussions of constitutional issues.... Amar's analysis is consistently original.... Amar has written a fascinating book on constitutional history."—
Los Angeles Review of Books

"A tour de force by the best U.S. constitutional law scholar since Justice Joseph Story! Akhil Reed Amar understands and explains American Federalism and the role of the fifty states better and more deeply than anyone else. A fun, insightful, and enjoyable tour through the landscape of Constitutional Federalism."—Steve Calabresi, Clayton J. and Henry R. Barber Professor of Law at Northwestern University

"With The Law of the Land, Akhil Reed Amar has again demonstrated why he is America's foremost interpreter and explicator of our Constitution. In The Law of the Land, Amar turns his attention to the way geographical differences have shaped American law in surprising and revealing ways. As always, reading Amar is both a pleasure and an education."—
Jeffrey Toobin, author of The Oath: The Obama White House and the Supreme Court

"Akhil Reed Amar writes in clear and entertaining English, with a journalist's eye for drama and detail and a patriot's eye for the sweep of the American experience. Smart general readers interested in constitutional law will be pleased and instructed."
—
Richard Brookhiser, author of Founders' Son: A Life of Abraham Lincoln

"The connections Amar makes are intriguing.... Sections on how the Supreme Court has evolved in modern times are particularly interesting, as are the potential ramifications of what Amar calls the 'judicialization of the judiciary.'"—Library Journal, Editors' Spring Picks

"This ambitious treatise shows how landmarks in American constitutional history can be viewed as products of topography.... [Amar] amply proves that the varied American landscape provides an illuminating lens with which to view our legal system's fundamental tenets."—Publishers Weekly

"[Readers] will delight in [Amar's] smooth prose, his frank confessions of bias, his frequently sharp insights and the many sparkling nuggets he scatters throughout, whether about the location of the only national park site named after a Supreme Court case or how Camden, New Jersey, got its name. A provocative, consistently interesting take on our constitutional history.—Kirkus
or
Not Currently Available for Direct Purchase
Copyright © 2020 American Booksellers Association