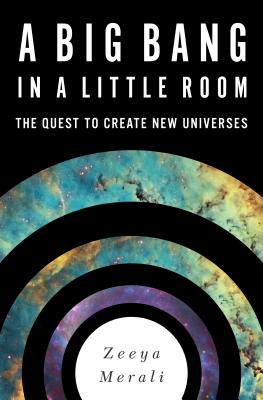 A Big Bang in a Little Room

The Quest to Create New Universes

An award-winning science writer takes us into the lab to answer some of life's biggest questions: How was the universe created? And could we create our own?

What if you could become God, with the ability to build a whole new universe? As startling as it sounds, modern physics suggests that within the next two decades, scientists may be able to perform this seemingly divine feat-to concoct an entirely new baby universe, complete with its own physical laws, star systems, galaxies, and even intelligent life. A Big Bang in a Little Room takes the reader on a journey through the history of cosmology and unravels-particle by particle, theory by theory, and experiment by experiment-the ideas behind this provocative claim made by some of the most respected physicists alive today. Beyond simply explaining the science, A Big Bang in a Little Room also tells the story of the people who have been laboring for more than thirty years to make this seemingly impossible dream a reality. What has driven them to continue on what would seem, at first glance, to be a quixotic quest?

This mind-boggling book reveals that we can nurse other worlds in the tiny confines of a lab, raising a daunting prospect: Was our universe, too, brought into existence by a daring creator?

Praise For A Big Bang in a Little Room: The Quest to Create New Universes…

"In A Big Bang in a Little Room, science writer Zeeya Merali [asks] whether physicists can create a 'baby universe' in its own Big Bang...Ms. Merali does an excellent job of describing the early history of [cosmic inflation]."—Peter Woit, Wall Street Journal

"Merali, an accomplished science writer, weaves a picture of modern cosmology from its results, its history and the motivations of individuals. Thoughts from Alan Guth, Andrei Linde and Alex Vilenkin about the development of cosmic inflation, and from Joe Polchinski about the evolution of string theory (to mention a few), wonderfully convey the sometimes thrilling and often circuitous nature of scientific progress, and its emotional ups and downs..[T]heir wisdom and quirks shine in Merali's excellent prose."—Nature

"[Merali] gives readers not only up-close looks at revolutionary science in the making but also memorable glimpses of the colorful revolutionaries... Science has never offered broader intellectual horizons!"—Booklist, starred review

"A charming reading tour of some of the most creative and unconventional ideas in modern science."—Anton Zeilinger, Scientific Director, Institute of Quantum Optics and Quantum Information and author of Dance of the Photons

"So you want to make your own universe. Zeeya Merali's new book won't quite give you an instruction kit-but it's the closest thing we have at the moment. A fun and mind-expanding ride through modern ideas of how universes come to be."—Sean Carroll, author of The Big Picture: On the Origins of Life, Meaning, and the Universe Itself

"Is it possible to create a universe in a lab? Is it moral? In this fascinating and provocative book, Merali walks a delicate line between physics and theology with charm, integrity, and wit. She deftly navigates heady scientific ideas and profound ethical questions, and her lively interactions with physicists bring their abstract theories to life. Whether you find it ultimately convincing or quixotic, Merali's journey will leave you marveling at the implications of DIY universe building and questioning the origins of our own strange universe."
—Amanda Gefter, author of Trespassing on Einstein's Lawn

"In her elegant and perceptive book, Merali unpacks the science behind what we know about our universe's beginnings and traces the paths that many renowned researchers have taken to translate these insights to new heights: the creation of a brand-new "baby" universe, and not an empty one, either, but one with its own physics, matter, and (possibly) life."—Kirkus

"If you're an atheist, it will both inflate your universe and give you the jitters, and if you are religiously inclined, it will blow your mind. This is a beautifully written and rewarding book that opens a door into a multiverse of extraordinary wonders."—Rowan Hooper, New Scientist

"To appreciate the diverse personalities who seek amazing links between cosmos and microworld on the speculative frontiers of physics, you should read this book."—Martin Rees, Emeritus Professor of Cosmology and Astrophysics, University of Cambridge, and author of Universe and Just Six Numbers

Zeeya Merali is a journalist and author who has written for Scientific American, Nature, NewScientist, and Discover, as well as published two textbooks in collaboration with National Geographic. She lives in London, United Kingdom.
Loading...
or
Not Currently Available for Direct Purchase